Unfunded commitments are a staple of private equity; for many registered PE funds this means cash drag and/or over-commitment.

The pace at which capital is called from unfunded commitments can be modeled, but is highly variable and dependent on market conditions.

Just as it limits the use of leverage, the SEC may (and should) limit the use of unfunded commitments by registered funds.

Registered PE funds need a structural solution to eliminate cash drag without over-commitment and the SEC may soon put that solution within reach. 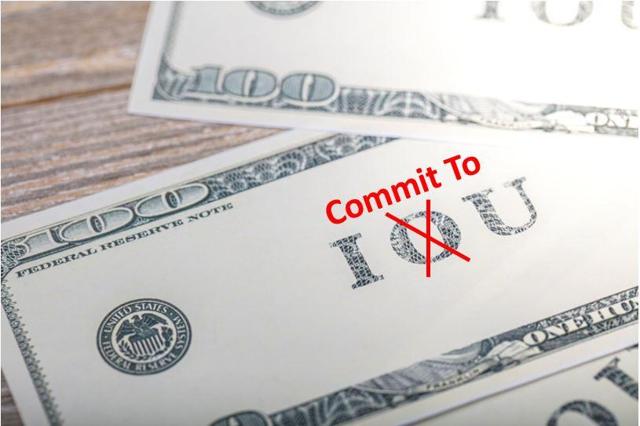 Given the extended identification and due diligence processes for private market assets, as well as their illiquid nature, episodic availability and the complexity associated with purchasing such assets, institutional private equity investors typically entrust the timing of private market transactions to fund sponsors (i.e. general partners) with the requisite knowledge and experience to make informed decisions regarding investing in private companies. Thus, most private equity funds (aka "vintage" funds) are subscribed via an unfunded capital commitment to be called over a defined, variable investment period. The capital commitment is funded by the institutional investor over time in response to calls from the PE vintage fund, and capital is returned to the institutional investor by the vintage fund when an investment is harvested. On average over the 15 year life span of a typical vintage fund, given the peaks and troughs of its capital use, only 30% - 50% of the committed capital is deployed.

As a tool to reduce their liquid assets on hand and the resulting cash drag, PE evergreen funds of funds have employed an "over-commitment" strategy, which entails making unfunded commitments in excess of the assets available within the evergreen fund to meet the commitments. The success of this approach depends on the ability of the PE fund of funds to align the capital use cycles of the underlying vintage funds in which they invest, so that the peak capital use of some vintage funds corresponds to the lowest capital use of other vintage funds.

Institutional PE investors have harvested massive amounts of data regarding the historical use and associated timing of capital called and returned by many private equity general partners, including the most prominent and many smaller players. Using this historical data and the distribution of their capital commitments to specific underlying funds of specific vintages in their portfolio, experienced institutional PE investors can model the calls expected to be issued by underlying funds drawing capital against their commitment.

There are a number of factors that impact any capital call model. Among these factors are: 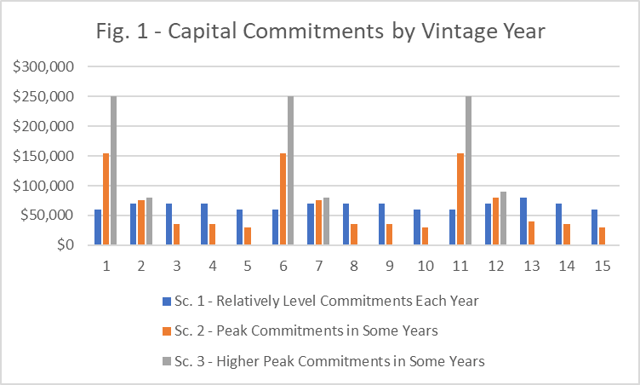 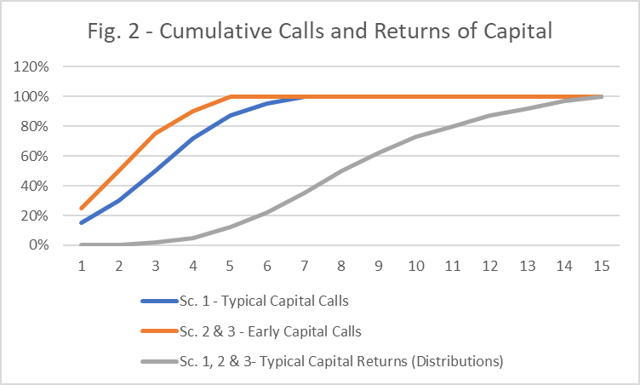 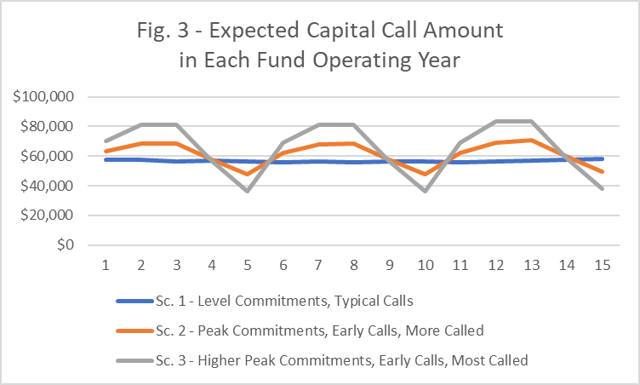 Source: Created by the Author's model using the data in Figs. 1,2 and Table 1 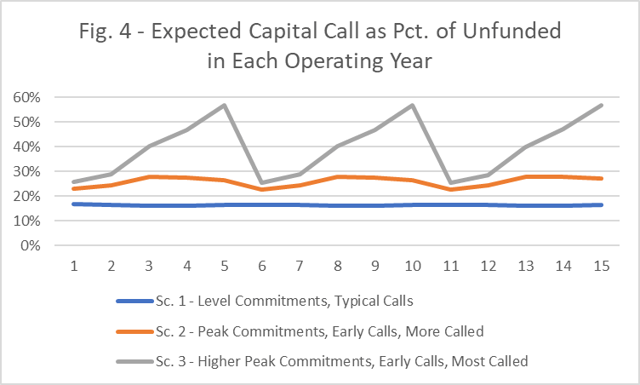 Source: Created by the Author's model using the data in Figs. 1,2 and Table 1

Of course, in each scenario, available liquid assets should exclude assets expected to be applied to fund operating expenses, as well as any liquidated gains awaiting an IRS required distribution.

A market distortion could significantly impact these scenarios, possibly resulting in an underlying fund drawing more rapidly on unfunded commitments and reflected in greater than expected capital call amounts. It's important to note that such a market distortion could be created by negative (e.g. portfolio companies needing more capital to survive) or positive (e.g. having more/larger than anticipated investment opportunities) market conditions impacting underlying funds. Thus, like a long term weather forecast, there are limits to the predictive value of any capital call and return model. Just as coastal homes should be built to withstand hurricanes, a PE fund of fund's capital model and unfunded commitments should be constructed to survive potential market distortions that could occur more than once within the 15 year life of a typical PE vintage. This means planning to have access to a greater amount of liquid assets than the model would otherwise require.

Not Leverage, but with an Asymmetric Risk of Default

Section 18 of the Investment Company Act of 1940 provides well defined limits for the use of leverage by registered investment companies. These limits were instituted to protect investors from the potential downsides of extensive leverage, including the acceleration/magnification of losses and the potential forfeiture of assets resulting from a default. Over time, the investment community has found ways around the '40 Act limitations on leverage, primarily through the use of cash settled, derivative instruments. In 2015, the SEC attempted to address and limit use of the embedded leverage associated with derivatives through proposed Rule 18f-4. Within that proposed rule, the SEC also addressed what they referred to as "Financial Commitment Transactions", aka unfunded commitments. At that time, many respondents to the proposal explained that Financial Commitment Transactions should not be governed by Section 18 leverage restrictions, as such transactions are not a form of leverage, given that they entail no borrowing and don't accelerate gains or losses. The SEC ultimately accepted these explanations and, primarily due to the on-going debate around the method by which derivative exposure should be measured, Rule 18f-4 (as proposed in December 2015) was not enacted by the SEC.

Despite the SEC's agreement that unfunded commitments are not a form of leverage, it's important to keep in mind that in one significant aspect, the use of leverage and the use of unfunded commitments have a common downside: asset forfeiture. When a fund borrows to create leverage, it provides the lender with assets as collateral against the loan. If the fund defaults on the loan, the lender may claim the collateral. When an investing PE fund of funds defaults on a capital commitment to an underlying fund, the underlying fund may claim the fund of funds' partnership interest in the underlying fund (like a bank foreclosing on a homeowner who's defaulted on their mortgage, but without requiring the involvement of the courts). For example, the Model Partnership Agreement of the Institutional Limited Partner Association states that an underlying vintage fund's General Partner may "determine that the Defaulting Partner must forfeit up to 100% of its Interest in the Fund without payment or other consideration therefor." So, as it is with the excessive use of leverage, the potential downside risk of an excessive unfunded commitment is asymmetric to the potential upside reward.

The SEC is taking another look at Unfunded Commitments

Since shortly before the SEC first proposed Rule 18f-4, a number of private equity fund of fund investment companies have been launched. These funds include: the CPG Carlyle Master Fund, which invests in underlying private equity funds sponsored by Carlyle Group (CG); the Altegris KKR Master Fund, which invests in underlying funds sponsored by KKR (KKR); the Pomona Investment Fund, operated by a subsidiary of Voya Financial (VOYA); and the AMG Pantheon Master Fund, operated by a subsidiary of Affiliated Managers Group (AMG). As recently as March 2018, these funds carried significant balances of liquid assets in support of their unfunded commitments to underlying private equity funds. In most cases, these balances were held in cash or cash equivalents such as T-Bills and money market funds. As expected, these lower return assets created "cash drag", reducing overall fund returns. In their response to reduce cash drag, these PE funds of funds generally purchased additional underlying vintage fund interests with associated unfunded commitments, increasing their degree of over-commitment. Doing so had the effect of both reducing the relative size of their liquid asset balances (Fig. 5) and increasing the relative size of their unfunded commitments (Fig. 6). 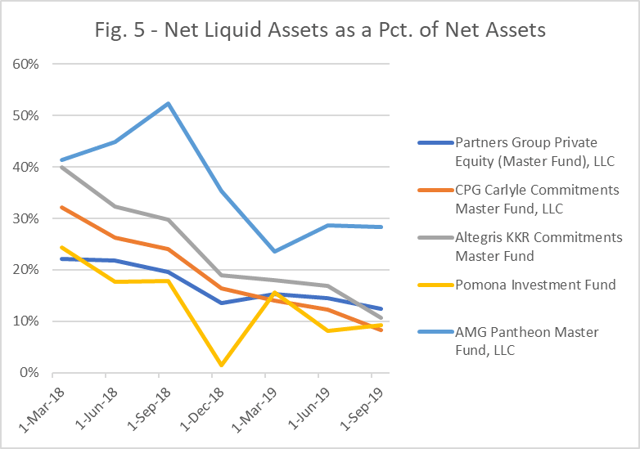 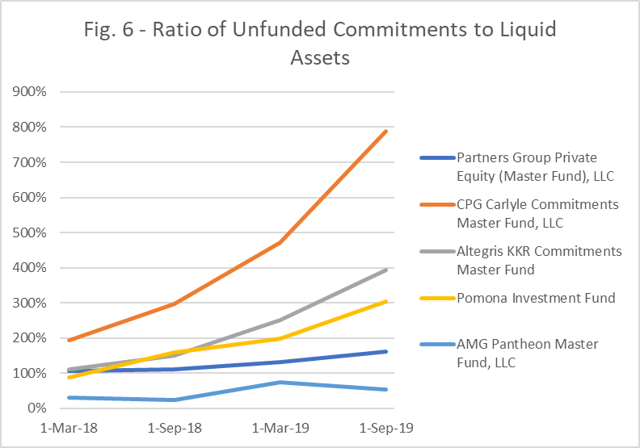 In November 2019, the SEC proposed a revised version of Rule 18f-4. The newly proposed version of the rule again addresses the topic of unfunded commitments. The SEC's proposal states:

Second, the proposed rule would provide that a fund may not take into account cash that may become available from the sale or disposition of any investment at a price that deviates significantly from the market value of those investments…

Finally, the proposed rule would provide that a fund may not consider cash that may become available from issuing additional equity."

The proposal goes on to note that registered funds could borrow (within the bounds of the '40 Act) to address capital sufficiency. However, as a practical matter, PE fund of funds are presented with three issues when attempting to borrow on a long term basis:

Given the long-term nature of PE investment, and the absolute necessity that adequate liquid assets be available in support of that investment, it would be ideal for PE evergreen fund investors to be able to select and revise their chosen liquid asset investment strategy periodically, as their individual outlooks and market conditions change. Providing this periodic choice to individual investors, will eliminate cash drag without requiring over-commitment and its attendant risk.

In December 2018, the SEC proposed Rule 12d1-4. In a nutshell, this rule would provide closed end funds (such as PE evergreen funds of funds) the flexibility that mutual funds currently enjoy with regard to investing in other mutual funds and ETFs. I've already developed and filed a pending patent on fund administration processes and technology which, when coupled with the flexibility of proposed Rule 12d1-4, will provide PE evergreen fund investors with a range of liquid investment strategies to be employed at their discretion, on their behalf.

Additional disclosure: I have an equity interest in a parent of the sponsor of the Altegris KKR Commitments Master Fund.

Follow Ken McGuire and get email alerts
+
Add a comment
Disagree with this article? Submit your own.
To report a factual error in this article, click here.
Your feedback matters to us!