Adobe’s (NASDAQ:ADBE) latest quarter featured strength across both its key segments – digital media and digital experience. Over the medium-term, I think the business has strong growth potential, particularly in. Meanwhile, digital experience also looks well-positioned to build on a strong fiscal year (+31% YoY in FY19). From a company-level perspective, Adobe is a clear leader in digital, and its fundamentals stand out, with top-line growth consistently exceeding 20%, with an annual revenue run rate of ~$12 bn and outstanding operating margins (~40%) to boot. In addition, management also plans to execute $5.1 bn in authorized share buybacks, which should help deliver solid compounding returns to shareholders over the coming years. The strong Q4 print points toward a very achievable ~$12 EPS two-years forward (non-GAAP), and coupled with an ~30x multiple, gets me to $360.

Adobe posted another strong quarter, with Q4 revenue reaching $2,991 million ($11.2 bn for FY19) and non-GAAP diluted earnings per share of $2.29 ($7.87 for FY19). Digital Media remains the main contributor, with net new annual recurring revenue (ARR) of $539 million, significantly better than the $475 million guidance provided at November’s Analyst Day event. The renewed digital marketing strength helped alleviate many of the concerns which had previously surfaced following the analytics platform release in April and Marketo, as the Creative Cloud continued to drive consistent top-line strength. 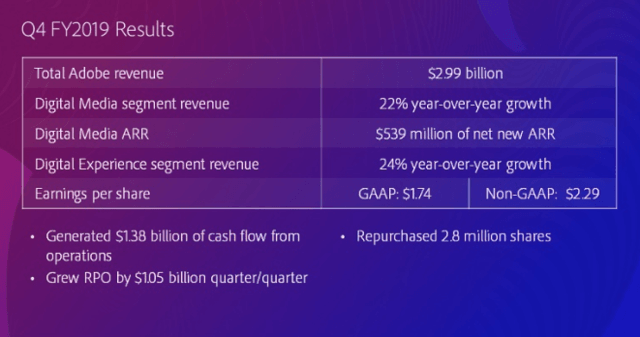 The big take from the Digital Media segment results was the notable acceleration across key metrics. Though headline revenue growth at 22% YoY for the quarter sustained the prior growth numbers seen in Q2 and Q3, the big plus was in total net new ARR additions, which came in at $539 million, an acceleration on a YoY basis (up 25% YoY versus the 14% YoY growth in 3Q). On an FY19 basis, net new ARR additions totaled $1,688 million, representing 17% YoY growth, again an acceleration from the 4% YoY growth rate in FY18. The net effect is that the overall Digital Media ARR balance moves up to $8,398 million, which at 23% YoY growth, points toward likely conservatism embedded in the FY20 guide of ~19% Digital Media revenue growth.

The key driver within the Digital Experience segment was the Experience Cloud, which grew 24% YoY to $859 million, translating to a 31% YoY segmental growth rate in FY19. 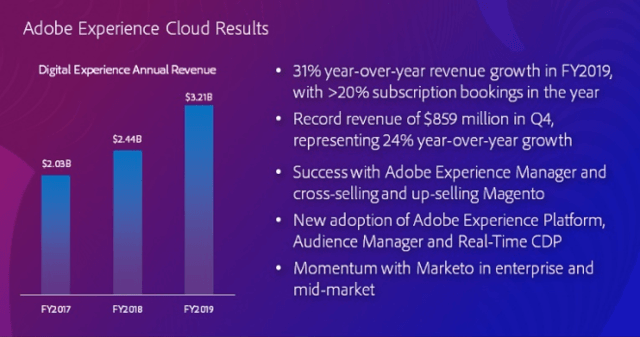 The strong segmental performance will have alleviated the concerns raised in Q3 - management previously noted in Q3 that subscription bookings growth for Marketo in the mid-market did not meet their expectations and, thus, planned to increase their focus and investment on-demand generation and inside sales. From the Q3 transcript:

“Our subscription bookings growth for Marketo in the mid-market did not meet our expectations, which is being addressed by increasing our focus and investment on-demand generation and inside sales.”

This quarter, on the other hand, management’s upbeat tone on the Q4 call pointed to a swift rebound – having made some investments that have improved go-to-market alignment, there has been a rebound in growth for Marketo as well as continued strength with Magento.

“In the mid-market segment, we talked about how creating an aligned mid-market-focused segment. We saw a rebound as it related to Marketo. Magento continues to do well.”

There were likely some additional factors at play – note that Marketo CEO Steve Lucas departed in September, with further shuffling in the Digital Experience leadership ranks in Q4 (e.g., Marketo's Americas enterprise sales head and President of Asia Pacific). The executive turnover isn’t a major source of concern, in my view, as it is fairly typical of significant mergers, and Adobe still possesses a deep bench of talent.

Having lapped the Marketo and Magento acquisitions, operating expense growth has slowed, which should enable operating margins to continue to expand further. As of 4Q19, opex as a % of revenue stands at 44.6% (~47.5% for FY19).

Further opex declines, coupled with the revenue growth potential set up the Adobe model for significant margin expansion in the year ahead, which should filter through to FY20 EPS.

Surprisingly, the Q4 strength and the Digital Media acceleration did not lead to increased guidance targets for FY20, with headline numbers remaining unchanged from the Analyst Day event. I think this implies there is a fair bit of conservatism embedded in the FY20 guidance, which I believe is now a relatively low bar.

The strong Q419 results set things up well for FY20, with net new ARR, revenue, and EPS all outperforming, while the Experience Cloud approaches stability following the integration of recent acquisitions. Margins should also benefit as the company laps elevated opex post-acquisition and shift its focus toward the more profitable segments. Assuming management executes to plan, I see non-GAAP EPS approaching the $10 mark in FY20 while sustaining a 30+x earnings multiple on FY21 EPS of ~$12, which would lead to a ~$360 target.

In addition to net income growth, Adobe also benefits from a shrinking float given the ongoing share repurchase program, which more than offsets dilution from share comp. Note that in FY19, Adobe bought back a total of 9.9 million shares, leading to a net decline in diluted shares by ~1% (assuming the continued deployment of ~$5.1bn in buyback authorization at the current ~$750m run rate).

I like the long-term Adobe story; not only has it proven its ability to capture new users while maintaining pricing power, its sticky, recurring revenue base from both Digital Media and Digital Experience offers investors excellent visibility into the EPS run rate. The repurchase program adds further support to the stock price and helps sustain a premium multiple. Adobe’s best-in-class operating model, coupled with its long-term $100 bn addressable market opportunity, keeps me bullish on the stock.

AB Capital
2.43K Followers
Semi-retired investor and former buy side professional. Keeping an eye on special situations and event-driven opportunities across the equity and credit universe. All views are my own.
Follow