They say that stocks don't go up forever, but lately, there are a bunch of names proving that statement quite false. Perhaps the biggest of them all is technology giant Apple (NASDAQ:AAPL), which seems to be rallying almost every day right now. While some might think the rally is due to improving expectations, a good chunk of it likely doesn't have much to do with the day to day business at all. Today, I'll discuss why.

As the chart below shows, shares of Apple are up nearly 45% over the past six months, incredible for a company of this size. While the market has done quite well overall, Apple has outperformed a number of its large cap peers by a tremendous amount. For this argument, I'm looking at Microsoft (MSFT), Amazon (AMZN), and Alphabet (GOOG) (GOOGL).

Why did I choose this particular names for a comparison? Well, it is because these four names as a whole are the largest holdings in the S&P 500. Apple's rally has made it become the most weighted name in this extremely important market index, passing Microsoft with the latest leg up. As a quick note, some pages might not show Alphabet as a top holding because of its dual-class share structure, but when combining the two classes, it's there.

As Apple's rally has become greater and greater, investments exposed to the S&P 500 have to buy more of the name. Let's look at the SPDR S&P 500 ETF (SPY), for example. According to the fund page, this ETF has 4.48% of its more than $302 billion in funds in Apple, and that's up from 3.85% at the end of calendar Q3. That means that this single ETF owns about 1.08% of Apple's outstanding shares using the October 18th count, which itself has likely has come down since due to the ongoing buyback program.

Now let's look at the Vanguard 500 Index Fund (VFIAX), a mutual fund that had over $520 billion in holdings at the end of November. This fund held more than 84 million shares of Apple at that date, and actually was the second largest holding to Microsoft. It likely has become the number one holding by now, and it probably has more than 2% of Apple's outstanding shares.

While I'm showing just the largest mutual fund and ETF here, these two have more than 3% of Apple's outstanding share count alone. Think about all of the other ETFs and mutual funds out there that are based on the S&P 500 or the technology sector, and the holdings are tremendous. The Invesco QQQ ETF (QQQ), for example, holds another 38 million shares plus of Apple. The key point here is that for every dollar that Apple rallies, especially outperforming other giants, it pushes more and more money into Apple, a snowball effect.

Interestingly enough, the rally has been so great that it is catching most analysts by surprise. With the breaking of $280 this week, essentially two out of every three analysts on the street have a price target below where shares are currently trading as the graphic below shows. Another $20 higher would take out almost every price target currently, while if shares dipped that amount, you'd still have plenty of targets underwater. By the way, it's probably a good time to update your buy recommendation when your price target is nearly $60 below the stock's current level. 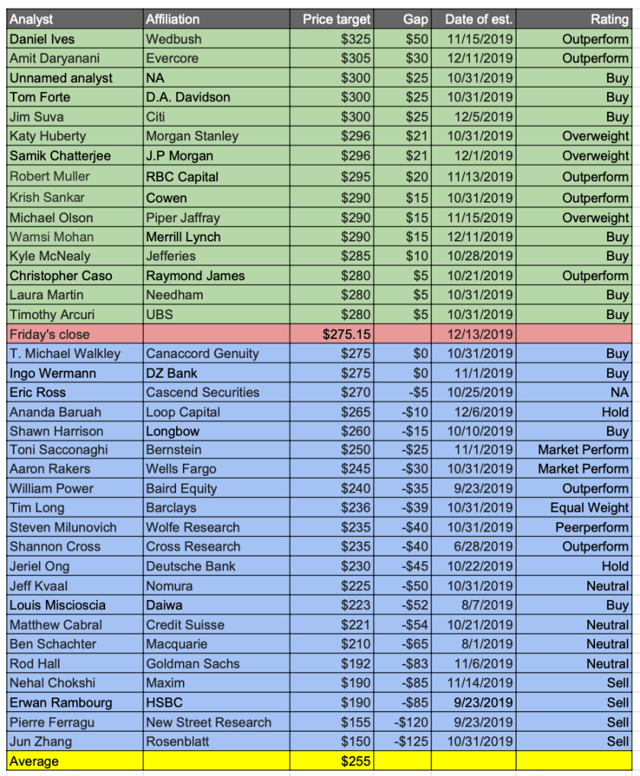 Obviously, investors are wondering how much longer this rally can last. Well, unless we see another huge round of quantitative easing or several more Fed rate cuts, I doubt Apple's performance in 2020 will mirror that of this year. That doesn't mean the stock can't rally further, but expecting another 80% from a name of this size seems extremely unlikely. Going back to 2012, the stock has seen three years before this one where shares gained more than 30% on the year. The year after it's respective performance (not dividend adjusted) was 5.43%, negative 4.64%, and negative 6.79%.

As Apple shares continue to rally to new all-time highs, the situation essentially snowballs. With so many funds out there tied to the S&P 500 and the tech sector, Apple's weighting continues to increase as it outperforms other tech giants. That means more funds have to buy Apple, pouring more money in, and those holdings in percentage terms grow even more as the share count is reduced. A further rally into year's end likely puts shares close to or above $300, at which point almost every analyst on the street will have their price target underwater barring a number of new notes before then.

Bill Maurer
32.69K Followers
I am a market enthusiast and part-time trader. I started writing for Seeking Alpha in 2011, and it has been a tremendous opportunity and learning experience. I have been interested in the markets since elementary school, and hope to pursue a career in the investment management industry. I have been active in the markets for several years, and am primarily focused on long/short equities. I hold a Bachelor of Science Degree from Lehigh University, where I double majored in Finance and Accounting, with a minor in History. My major track focused on Investments and Financial Analysis. While at Lehigh, I was the Head Portfolio Manager of the Investment Management Group, a student group that manages three portfolios, one long/short and two long only. I have had two internships, one a summer internship at a large bank, and another helping to manage the Lehigh University Endowment for nearly a year. Disclaimer: Bill reminds investors to always do their own due diligence on any investment, and to consult their own financial adviser or representative when necessary. Any material provided is intended as general information only, and should not be considered or relied upon as a formal investment recommendation.
Follow