As is widely covered and known now, Boeing (NYSE:BA) will be suspending production of the Boeing 737 MAX until further notice starting in January. In an e-mail to employees seen by AeroAnalysis, Dennis Muilenburg gave further information on the decision to halt production. In this report, I will have a look at those reasons, though they are not surprising at all, but I will also have a look at what is wisely not explicitly mentioned in the Boeing statements to the public and in communications with employees. 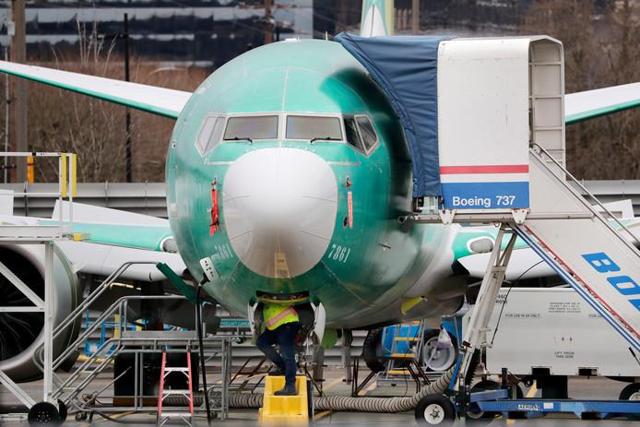 Boeing provided the statement to the public. There is not a whole of surprising elements in there. The company started with re-emphasis on the requirement of a safe return, acknowledging the need for a thorough review by regulators. It’s quite a different tone from the recent reports we read in which Boeing tried to exert pressure on the FAA to have the Boeing 737 MAX recertified by December 2019. The most recent statement shows that Boeing is finally able to face reality, months late.

Boeing also said that the decision to halt production is least disruptive to maintaining long-term production system and supply chain health and is driven by a combination of several factors:

None of the above is actually a surprise. Realistically, Boeing could have known months ago that certification would slip into 2020. It would have allowed the company to re-align production, but to me, it seems that the company instead started pushing harder on recertification by year-end and kept production levels constant. According to the e-mail seen by AeroAnalysis, Boeing deemed a production rate of 42 aircraft per month in the best interest of customers, employees, the production system and the supply chain. That’s something that I agree on.

Boeing’s target for recertification shifted from early Q4 to late Q4 and has now slipped into 2020. We previously already reported that Boeing’s schedule was not realistic and that is also what FAA administrator Dickson has made clear to Boeing recently. I believe that Boeing’s best estimate on a recertification have not been realistic at any point and that is one danger I saw for the company, as the recertification is a key element in Boeing’s liabilities calculations as well as the company’s added block costs for the Boeing 737 MAX. 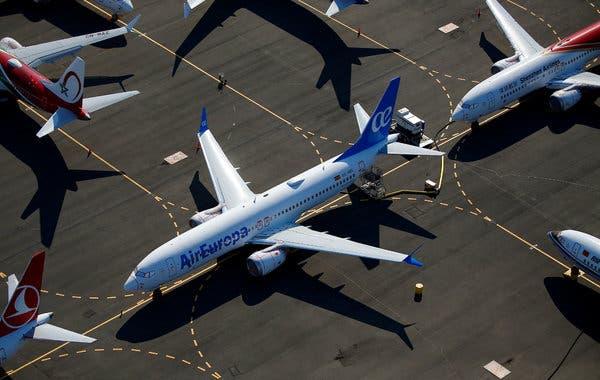 I believe that Boeing is aware that it cannot accelerate the recertification progress by pressuring the regulator and you can only compliment the FAA on their tough stance here, but Boeing chose to continue production at the highest rate possible because financially it makes most sense. Would the company have added some realistic scenarios to their overall assessment, they would have concluded that the recertification schedule would slip deep into Q1 2020. You could ask yourself whether Boeing couldn’t have known better and I think they could have, but admitting the schedule slip in October while there still was an extremely tiny chance to have the aircraft back by December would have triggered additional cost growth.

I think that Boeing somewhat ignored the signs of a further delay in the process to avoid additional cost growth. Instead, the company kept production alive at 42 aircraft per month, which is something that I can somewhat understand. In absence of a possibility to accelerate the recertification process, the only way for Boeing to manage its compensation arrangement with customers was to produce an aircraft they can eventually deliver to airlines. Would the company have chosen to slow down production earlier, it would have triggered additional cost growth which means there would have been less cash available for producing the aircraft used in negotiations with customers.

So, while Boeing now is facing the world as it is the financials undeniably have played a big role in a decision to keep production alive at a rate of 42 aircraft per month and if the schedule slips, which did happen, temporarily kill production altogether. December-January was a pivotal point in time for Boeing, since that is where the timeline and the financials meet and not necessarily in a good way.

Boeing ran out of MAX-related cash

The aerospace industry is a complex and cash-intensive industry, from design and development to aircraft manufacturing, there is a lot of cash involved. Typically, customers pay a percentage of list price when they order the aircraft and at predetermined points in time any customer has an obligation to make a pre-delivery payment to Boeing as agreed on in the sales agreement with the balance due upon delivery. What this essentially means is that part, in fact all, of the cash Boeing has been spending on production of the Boeing 737 MAX was already received in advance.

Below we determine how much cash Boeing received in pre-delivery payments and ultimately connect the financials to the time frame:

The next step is that we go from catalogue value to sales price. Every aircraft sales price differs from customer to customer with order quantity and additional selectable options affecting the contract value. Either way, we believe Boeing sells a Boeing 737 MAX 8 for ~$52 million indicating a discount of 57%. Production costs are more difficult to estimate, but since we’ve been analysing Boeing’s earnings for some quarters now, we believe that the cost of production for one Boeing 737 MAX 8 is around 20% bringing the cost price to $40.6 million per aircraft. 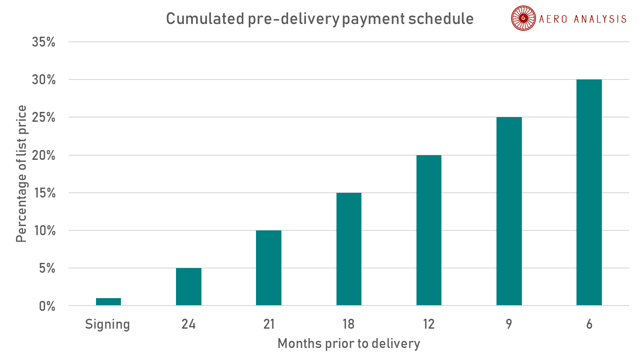 This is incredibly important information. Typically, 30% of the list price is paid six months prior to delivery. For a Boeing 737 MAX this means that $36.5 million is paid prior to delivery. The balance, after discounts, is paid on delivery. Without the final payment, the aircraft is not handed over to the customer. 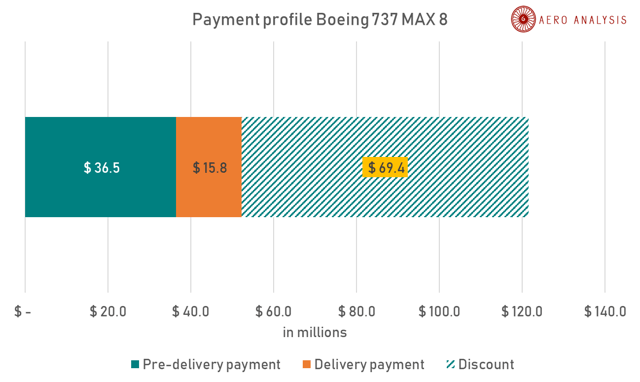 By reducing the production rate to 42 aircraft per month, Boeing had been spreading part of the cash it received as it initially expected to reach a production level of 57 aircraft per month and customers also had delivery slots that they made payments for already. Additionally, up until the grounding of the Boeing 737 MAX customers had been paying Boeing for deliveries that would occur in two years.

The interesting thing is that per year, we can apply the delivery payment profile. What we then find is the following PDP profile: 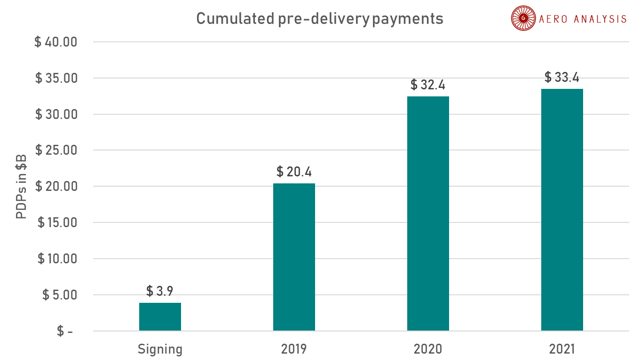 According to our calculations, Boeing received $33.4B in pre-delivery payments for Boeing 737 MAX deliveries that are yet to occur. A huge sum, that would allow Boeing to keep production alive for 6 quarters (measured from March 2019) but does not include any payments to suppliers. 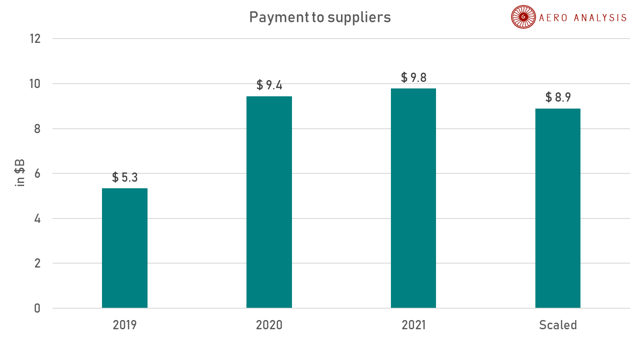 By doing so, we end up with an estimate of $8.9B. We believe that the signing PDPs in the amount of $3.9B is being used internally to arrange production of aircraft.

By the third quarter, Boeing had already spent $10.4B on the Boeing 737 MAX production while no longer receiving any PDPs from customers for these aircraft and added $3.6B in added production costs.

If we do the calculations using the numbers outlined above, we get the following:

What this shows is that Boeing had just $6.8B left out of the $33.4B it had received prior to the MAX grounding. Almost $7B sounds like a lot, but the fact is that this allows for 4 months of production given that production requires roughly $5B per quarter. The above calculations used Q3 figures, so that means that come January, Boeing would completely run out of cash that can be labelled as “Boeing 737 MAX money.” Taking into consideration that the schedule and Boeing added roughly $900 million in added costs per quarter to maintain a production level of 42 aircraft per month, Boeing would have money left to continue production until roughly the half of January. One should also keep in mind that we continuously talk about money attributable to the Boeing 737 MAX receipts and expenditures, but that Boeing does not have this money available in cash. The US jet maker has to borrow that money, which in turn also costs money.

This is where the financial and the schedule should have come together. Would the Boeing 737 MAX be recertified in December, it would have allowed delivery payments to pour in again. Instead the company, now sees the Boeing 737 MAX cash pool dry up with no sight on recertification for probably another 2-3 months.

While I do understand the decision to suspend production of the Boeing 737 MAX for the time being, I think it has more to do with the financials simply not allowing Boeing to continue production. Boeing said this decision is least disruptive to maintaining long-term production system and supply chain health. That’s a bit of a weird statement, since there is no more disruptive thing than halting the production. The financial calculations which I already made in September and updated for Q3 continuously have shown that in January the party would be over for Boeing 737 MAX production and I really do think that Boeing knew this or could have known this and that is information they should have presented to shareholders.

Months ago, we already pointed out the pivotal nature of the December month and we have concluded that the certification timeline slipped past this point triggering the production rate cut which is closely tied to the payments received for the program.

So while the decision to stop production in January fully fits my view, I think management has no credibility as the company ignored the obvious (not being able to have the MAX return in December) while it also did not do a good job informing shareholders.

If you enjoyed reading this report, please consider following Dhierin on Seeking Alpha to get notifications when I publish new insightful analysis.