If I were to tell you the following about a community bank, what price to tangible book valuation multiple would you assign it?

In banking, the real differentiator between the good and the bad banks is the liability side of their balance sheet rather than the asset side. The banks with the lowest cost of funds are at a competitive advantage for a number of reasons: First, these banks have loyal customers who aren’t shopping around for the highest interest rate on their deposits. In addition to providing the bank with a cheap source of funds, these deposits are stable and therefore long-term in nature. Finally, banks with low funding costs are able to fund their loans more cheaply and therefore earn a greater profit. There’s no magic formula to earning more on your assets as a bank. You either take on greater credit risk (Risk that the borrower won’t make their payments) or duration risk (Maturing at a later date). This is why the main differentiator is the cost of funds. Here’s how FMBL stacks up: 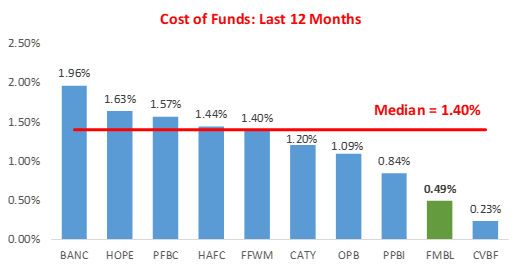 A common metric many investors use to assess the quality and efficiency of a bank is its return on assets or ROA. This is calculated as the bank’s net income divided by its average assets. A bank with a higher ROA demonstrates that is more profitable relative to its asset level versus another bank. Because banks can earn more income on their assets by taking on greater credit risk, this ratio is not perfect. However, it is still a decent way to tell the good banks from the not so good ones. Here’s how FMBL performed over the last 12 months:

FMBL maintained the highest ROA during the Great Recession, which was significantly above the peer median….And this is compared to the banks that actually survived!

These charts illustrate that FMBL’s ROA and overall profitability has been consistent over the years, unlike its competitors. Its ROA over the last 12 months is not much different from its 2008-2018 average or its 2008-2011 average. This just goes to show you that Farmers and Merchants is a strong performer during the good times AND during the bad times. Most of its competitors, the ones that actually made it through the Great Recession, performed well when the economy was good, only to later crash when the economy crashed.

Companies that are safer are generally valued at a higher multiple relative to their riskier peers. As risk increases, investors demand a higher return (lower valuation multiple), to compensate them for the greater uncertainty. In no other industry is safety more important than in banking. During the Great Recession it was the banks’ low capital ratios that led to their failure. Those with the highest capital ratios survived. Many banks had tangible equity (tangible book value) to tangible asset ratios of 5% or less. This meant that a decline in the value of their assets of only 5% wiped out their entire equity. Today the banking system is much better capitalized and here is how FMBL stacks up:

FMBL, by far, is the best capitalized!

Another way to assess a bank’s safety is to compare the percentage of loans that are noncurrent to its total loans as well as to look at how much the bank has reserved for potential loan losses. Noncurrent loans are those where the borrower is 90 days or more delinquent on their scheduled interest or principal payments.

FMBL’s loans are performing the best AND….it has accrued the most reserves to cover these loans!

Noncurrent loans as a percentage of total loans has a negative 73% correlation with P/TBV multiples and allowance for loan losses as a percentage of noncurrent loans has an 84% correlation with P/TBV multiples. This makes sense since it indicates a bank’s accounting is conservative and there is a lower likelihood of negative earnings surprises from problem loans in the future.

What Valuation Multiple Does FMBL Deserve?

Taking a high-level view of the data I’ve presented there are a few takeaways:

Here’s how FMBL’s peers are valued:

To emphasize how absurd this is, here’s how the bottom 5 banks look:

Each of FMBL’s metrics is by far better than any one of these banks, yet they trade at a P/TBV multiple that is 36% higher than FMBL!

There are a few reasons why FMBL is undervalued, most of which have nothing to do with the fundamentals of the actual business:

Just because FMBL lacks Wall Street coverage and doesn’t trade on a major stock exchange doesn’t mean the business is worth less than a well-covered, NASDAQ-trading bank. In fact, this allows it to go under the radar and not be bid up. Throughout history, the best investment opportunities seem to be the ones where others were not looking.

One of the biggest reasons for FMBL’s undervaluation is that it is misunderstood and not appreciated by investors for being defensively positioned and almost countercyclical. While its high capital ratios reduce its return on equity (ROE), they also act as a buffer during economic declines. This positions the bank to take advantage of opportunities when other banks are pulling back from lending and allows it to shine in good times and in bad times. This is especially clear from its performance, during the 2008-2011 market downturn. In 2008 alone, FMBL grew its loans by 27 percent and its deposits by 33 percent! It did this also while repurchasing 14 percent of its shares outstanding. I don’t think you need to be reminded how Southern California banks performed in 2008.

None of FMBL’s peers were able to perform so well. Certainly not organically and certainly not also having the capital to repurchase shares too. With fears that we are late in the economic cycle and talk about a recession around the corner, shouldn’t FMBL be the bank to own? If the banking industry pulls back on lending because of elevated loan losses and other factors, FMBL would only benefit as it would have the capacity to lend on attractive terms and develop and/or expand relationships on the lending and the deposit side at the expense of its competitors. Shouldn’t such a bank trade at a premium multiple to its peers, or at least trade in line with its peers, NOT dead last in its peer group?

To conclude, Maverick Value owns shares of FMBL because:

34 Comments
To ensure this doesn’t happen in the future, please enable Javascript and cookies in your browser.
Is this happening to you frequently? Please report it on our feedback forum.
If you have an ad-blocker enabled you may be blocked from proceeding. Please disable your ad-blocker and refresh.