Shares of Merus NV (NASDAQ:MRUS) have fallen by 16% since my initial article was published in May of 2017, in which we touched on potential advantages of its Biclonics platform technology and multiple assets in the clinic. Shares have fallen by 7% since my February 2018 update piece.

While, in ROTY, we sold this name for a slight profit in 2018 (due in part to one reader pointing out a potential red flag in the form of postponed data readouts), Merus again popped up as a worthy research candidate when it appeared in our Institutional Top Ideas series as a conviction holding for Mark Lampert's Biotechnology Value Fund. With multiple near to medium-term catalysts, I look forward to revisiting to determine if there's finally an opportunity for readers to take advantage of.

When looking at charts, clarity often comes from taking a look at distinct time frames in order to determine important technical levels to get a feel for what's going on. In the above chart (daily advanced), we can see that shares are closing out this time frame at a significantly higher price point than which they began. Shares briefly spiked in late September above the $20 level, but have since settled again in the mid-teen range.

In my last update piece, I touched on the following aspects of the bullish thesis:

Let's take a look at recent events to determine how they've affected our thesis here.

On May 5th, the company announced that the first patient had been treated in the phase 1 study evaluating MCLA-145 (potential first-in-class PD-L1 x CD137 Biclonics) for the treatment of patients with advanced solid tumors. Management reminds us that the hope with this drug candidate is to overcome known systemic side effects of CD137 agonists currently in development through more targeted delivery to the tumor microenvironment and to address a significant unmet need in patient populations not benefiting from current immunotherapeutic agents. As this is an early-stage trial, primary objectives include finding the appropriate dose, safety and tolerability (preliminary antitumor activity and functional target engagement will also be assessed). Keep in mind that Merus retains US rights, while Incyte has rights outside the United States.

On October 27th, the company announced early data for three patients with cancers harboring NRG1 fusions who were treated with MCLA-128 through an Early Access Program and provided an update on MCLA-128 clinical programs. The three patients were treated with the 750 mg IV dose administered every other week, while NRG1 gene fusions were identified via RNA-based sequencing. All three patients exhibited tumor shrinkage, symptomatic improvement and durability up to their most recent assessment (all remained on treatment as well). I found it encouraging that these results were achieved in multiple types of difficult to treat cancers as well (pancreatic ductal adenocarcinoma patient with 44% reduction in tumor diameter that improved to 54% at 5-month scan, another PDAC patient with 22% reduction in tumor diameter with 25% reduction at 5 month scan, NSCLC patient with 33% reduction in tumor diameter that improved to 41% following 5 month scan). This last patient had progressed on six prior lines of therapy.

MCLA-128 continued to be well tolerated in a phase 1/2 study with 117 patients treated (dosing regiments of weekly to once every 3 weeks) and most adverse events being mild to moderate in nature (incidence of drug related grade 3 AEs of 4%). To be fair, there was one case of grade 5 hypersensitivity reaction.

Going forward, the company amended the phase 1/2 eNRGy trial to focus just on patients with solid tumors harboring NRG1 fusion. As of October 27th, nine patients had been identified (3 PDAC, 6 NSCLC) and enrolled into EAP and eNRGy trial. Of the six NSCLC patients, one patient with confirmed PR remains on treatment, one patient had stable disease for greater than 7 months but discontinued the trial due to poor adherence, two patients had progressive disease and two patients had only recently started treatment and not been assessed for response. Next interim NRG1 data update is expected to be presented at a medical conference by the end of 2020.

As for efforts in metastatic breast cancer, after enrolling the phase 2 combination trial, the company has no plans to pursue MBC or gastric cancer indications (refocusing efforts on eNRGy trial). An unplanned interim efficacy analysis with data cutoff of October 23rd. In the HER2+ cohort, ORR was just 4% confirmed, 17% unconfirmed. All patients had previously been treated with trastuzumab, pertuzumab, and an anti-HER2 antibody drug conjugate. The median number of prior lines of anti-HER2 therapy in the metastatic setting was three, and 71% of patients had visceral involvement. In the ER+ cohort, 40 patients were treated with MCLA-128, and while disease control rate was 40%, ORR was just 0% (no way to spin that positive). All patients were previously treated with CDK4/6 inhibitors. The median number of prior lines of endocrine therapy in the metastatic setting was two, and 85% of patients had visceral involvement. Mature results will be presented at a medical conference in 2020 and will include primary clinical benefit rate at 24 weeks for both cohorts.

On December 16th, the company announced that CEO and President Dr. Ton Logtenberg is stepping down with Dr. Sven Lundberg to succeed him. To put this into context, Logtenberg led the company for 16 years. New CEO Lundberg appears to have some relevant experience, including serving prior as Chief Scientific Officer at CRISPR Therapeutics and as Head of Translational Medicine at Alexion Pharmaceuticals.

For the third quarter of 2019, the company reported cash and equivalents of €168.1 million as compared to net loss of just €8.3 million. Research and development expenses rose slightly to €12.8 million, while management and administration costs came in at €2.9 million. Keep in mind that the above cash position does not take into account $79.2 million of gross proceeds from the November financing. Management is now guiding for operational runway into 2022.

MCLA-158 (Lgr5 x EGFR Biclonics) is more of interest considering significant unmet medical need it could address - initial safety data (and information around recommended phase 2 dose) is expected by year end with further guidance on program to be provided in 2020. Management has pointed out prior that this program could be the first colorectal cancer treatment to block the growth of tumors with RAS mutations (~50% of patients). 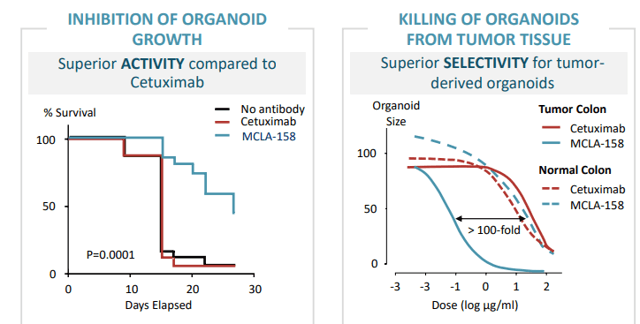 On the MCLA-128 update conference call from October, we are reminded that HER3 was thought to be undruggable by small molecule drugs like TKIs. Drugs targeting specific gene fusions has become a lucrative area in oncology resulting in transformational outcomes for patients. A big caveat here is that projections of incidence of NRG1 fusions are based on limited information, and more data needs to be analyzed to understand true incidence. Currently, the company estimates these fusions to occur in 0.3% to 3% of NSCLC (what a range), 0.5 to 1.5% of pancreatic cancer and less than 1% in other solid tumor types. According to management commentary, it would appear an efficient path to market exists for treating patients with NRG1 fusions, considering how other targeted oncology companies have been successful here (i.e. single arm enrichment trial). In response to an analyst question regarding a standardized tool being used for identifying patients with NRG1 fusions, the CMO stated that different assays for determining NRG1 fusions are being explored, and this remains a work in progress. Playing devil's advocate, an analyst was right to point out the strength of EAP data (3 of 3 patients responding) versus less promising results from the eNRGy trial (in NSCLC had 2 progressors, 2 that were too early to evaluate).

As for institutional investors of note, BVF recently sold some of its stake but still owns over 3.3 million shares.

To conclude, there are reasons for optimism with this bispecifics player considering multiple irons in the fire, bolstered cash position and multiple catalysts in 2020. That said, there are multiple caveats as well as we don't know the true incidence of NRG1 fusions, and initial data has yielded variable outcomes (promising efficacy signals, but big difference between new study and EAP). Programs like MCLA-158 and MCLA-117 look quite intriguing, but again, nothing can be known until we get a look at initial data.

Thus, while certain programs interest me a great deal, I remain on the sidelines until additional data updates provide more clarity. Remember, my goal (especially in ROTY) is to focus on just the few stories where we truly feel we have an edge, and I encourage readers to be very selective with the pitches they choose to swing at.

While near-term dilution is not a concern, given the recent secondary offering, key risks include setbacks in the clinic, disappointing data readouts and intense competition for certain indications (metastatic breast cancer for example).

Author's Note: I greatly appreciate you taking the time to read my work and hope you found it useful. Consider clicking "Follow" next to my name to receive future updates and look forward to your thoughts in the Comments section below.

Take a 2 Week Free Trial and Join 550+ biotech investors and traders in the ROTY Community!

Check out recent reviews of the service here.