The breakout held into mid-week before price discovery higher developed to 61.40s into week’s end.

This week’s auction saw buy-side continuation to 61.40s as the market grinds toward the September supply, 62s-63.35s, overhead.

As noted in last week’s WTI Weekly, the primary expectation for this week was for price discovery higher, barring failure of 58.80s as support. This expectation did play out as support developed near 59.71s as sellers trapped in Monday’s auction. Price discovery higher ensued as a buy-side breakout above last week’s resistance drove price higher to 61.40s, developing sell excess ahead of Friday’s close, settling at 60.44s. 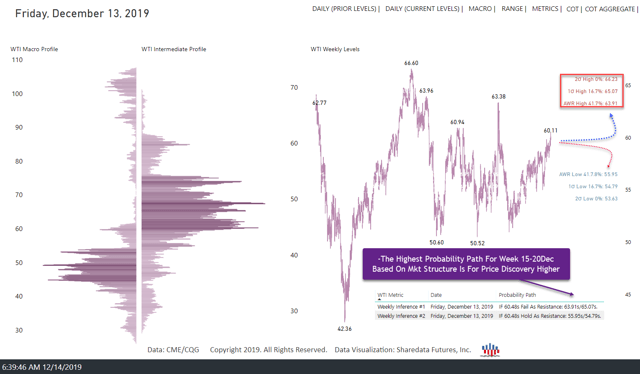 Looking ahead, response to this week’s demand cluster, 60.25s-59.95s, will be key. Sell excess developed in Thursday’s auction, signaling a potential halting of the buy-side sequence. Buy-side failure to drive price higher from this key cluster will target key demand clusters below, 58.75s-58.10s/55.50s-55s, respectively. Alternatively, sell-side failure to drive price lower from this key demand will target key supply clusters overhead, 60.95s-61.35s/61.60s-62.60s, respectively. Near-term bias shifts sell-side, barring failure of 61.40s as resistance. The broader contextual question is what the next directional phase will bring following the current developing balance, 63.38s-50.52s. The larger context remains neutral between 63.38s-50.56s. Next week’s auction behavior is likely to be muted due to the Christmas holiday.

It is worth noting that market posture warranted caution on the buy-side near the April 2019 high, 66.60s, as Managed Money (MM) long posture peaked there. MM short posture then trended higher before reaching the near-term peak into late July where the current price low was formed. This week’s report shows MM net long posture (+272k contracts), the highest level since May 2019. MM long:short ratio, MM net long as % of open interest, and MM net long posture are all closer to levels seen at recent resistance areas as the market approached 61.50s this week. This development continues as WTI now trades within the typical seasonal low-price period (November-December). This divergence implies a broader neutral posture through the holiday season. 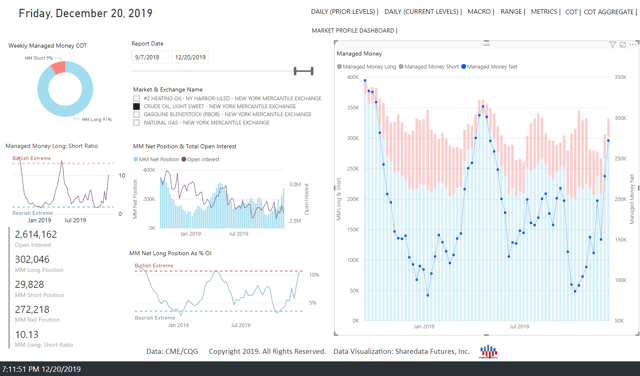 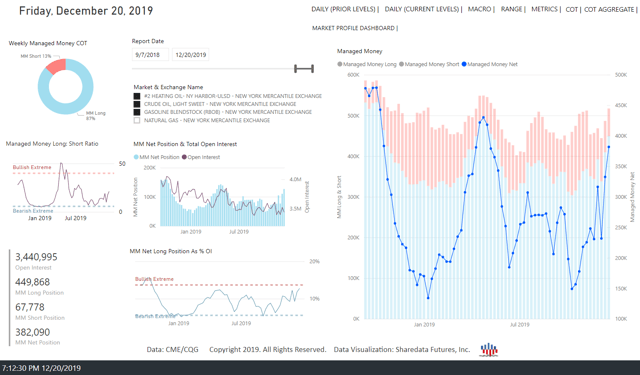