The S&P 500 is now trading in rarified air and is now primed for a correction.

Any such correction may not take place for several weeks, and may result in short-term declines of as much as -9% to -12%.

Investors seeking to initiate or add to U.S. stock allocations as part of an asset allocation strategy should view any such pullback as a potential entry point buying opportunity.

This great year must be considered in a broader context. It's worth remembering that U.S. stocks bottomed on Christmas Eve exactly one year ago after having plunged more than -20% peak to trough in 2018 Q4. Thus, much of the 2019 advance in the S&P 500 was a recovery of the decline that preceded it at the end of 2018. After trading effectively flat from the end of January 2018 through the start of October 2019, U.S. stocks have staked fresh new ground in 2019 Q4 with a definitive move to the upside. 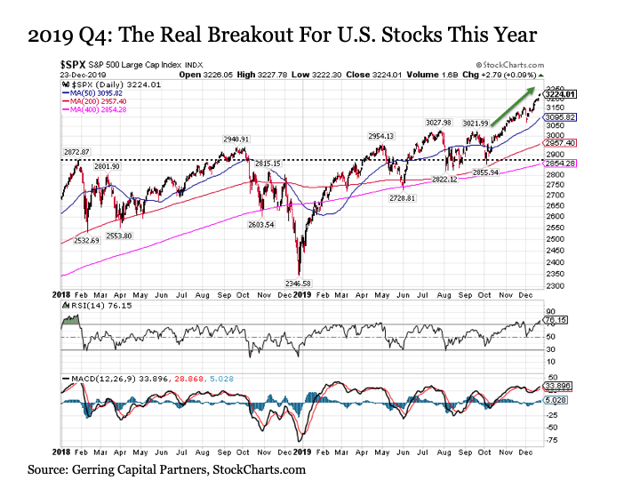 The S&P 500 is now trading in rarified air. Never mind the fact that the benchmark index is now trading around its highest post crisis multiple at more than 24.3 times trailing 12-month GAAP earnings, as valuations often do not matter until they suddenly matter a whole lot. Not only are stocks now heavily overbought on both a relative strength and momentum basis, but the S&P 500 also is trading more than +4% above its 50-day (blue line in the chart above), +9% above its 200-day (red line), and +12% above its 400-day (pink line) moving averages.

U.S. stocks are now primed for a correction. The S&P 500 has traded at or above these premia to its moving averages on only three prior occasions over the past six calendar year. The first took place in January 2014, and U.S. stocks subsequently corrected by more than -6%. The next occurred in early March 2017, and stocks proceeded to fall by more than -3% over the next month. The third came in January 2018, and stocks subsequently fell by -12% in struggling over the next three months.

When should we expect this stock correction to take place? Not right away. It’s Christmas time, and Santa Claus is likely to continue delivering in full for the U.S. stock market at least through the start of 2020. If history is any guide, investors reasonably should not expect any potential correction to take hold until the second full week of January roughly three weeks from now. This gives stocks time to consolidate recent gains if the S&P 500 trades sideways from here. Conversely, this also gives stocks the chance to reach an even higher perch from which to correct if the S&P 500 continues to rise. 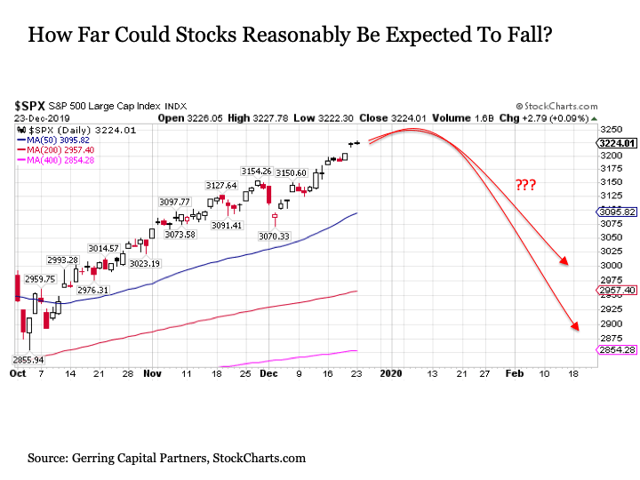 How far should we expect stocks to fall once any correction arrives? Investors should be prepared for the possibility that stocks could fall as much as -9% to -12% from current levels over the coming weeks. And if stocks continue to rise in the coming weeks, the magnitude of this potential correction could increase to well above -10%. But it should be noted that any such short-term correction would not only be a garden variety pullback in historically normal market conditions, but it would not even break the uptrend in the ongoing bull market advance. Instead, any such pullback would do nothing more than bring the S&P 500 back to its 200-day to 400-day moving average, keeping the uptrend fully intact. 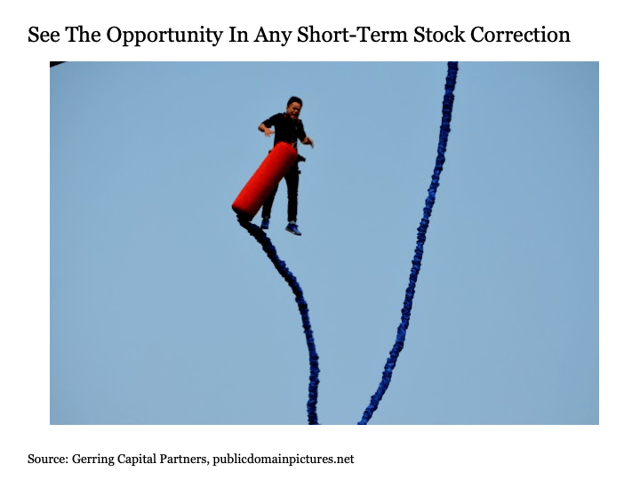 See the opportunity in any future short-term stock correction. If the S&P 500 were to fall into correction sometime over the coming weeks, investors (along the executive branch of the U.S. government and the U.S. Federal Reserve or that matter) should neither despair nor agitate. Stock pullbacks are normal and healthy, and investors seeking to establish or add to U.S. stock allocations as part of a broad asset allocation strategy may be well served to use any such short-term pullback to 200-day or 400-day moving average support as a time to consider purchasing an allocation to U.S. stocks.

Disclosure: This article is for information purposes only. There are risks involved with investing including loss of principal. Gerring Capital Partners and Global Macro Research makes no explicit or implicit guarantee with respect to performance or the outcome of any investment or projections made. There is no guarantee that the goals of the strategies discussed by Gerring Capital Partners and Global Macro Research will be met.

Follow Eric Parnell, CFA and get email alerts
+
Add a comment
Disagree with this article? Submit your own.
To report a factual error in this article, click here.
Your feedback matters to us!