Some days nothing succeeds in decimating a stock price like failure. Penn Virginia (PVAC) emerged from bankruptcy to basically sell itself. The company engaged in a strategic evaluation process that resulted in bids to take over or merge with the company. That process resulted in one of the most ill constructed winning bids this author has ever seen in a bidding process. Shareholders should be able to benefit from these missteps in the future.

In a market that emphasizes debt reduction, Denbury Resources (DNR) won the bidding process with a highly complicated bid that would have resulted in a highly leveraged company. A quick comparison with the Chesapeake Energy (CHK) offer to merge with WildHorse Resource Development (WRD) easily demonstrates why the merger with Denbury Resources was doomed.

The Chesapeake deal increased the shareholders' equity of Chesapeake Energy far more than debt levels rose as a result of the merger. Plus, Chesapeake Energy now has a realistic way of increasing cash flow even if oil prices weaken somewhat. The surviving Denbury Resources would have been highly leveraged and had little maneuvering room should oil prices decline. Plus, there was little reason for shareholders of Penn Virginia to merge with a high cost producer absent a significant premium.

The result of all of these negative results has been a pounding of the Penn Virginia stock to unreasonably low levels. Penn Virginia ended up with the "bankruptcy mark" as well as a failed merger. All that trumped low costs and a great Eagle Ford location. The stock price shows the results of all that action.

The results of all these events have Mr. Market focused on some very visible failures instead of the day-to-day operations that are succeeding far more than many competitors. The market is very much afraid of another management display of ineptitude and has priced that into the stock. 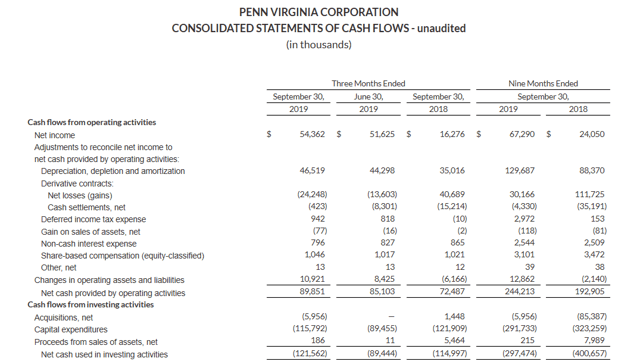 Yet, this management has managed to increase cash flow steadily despite some weak pricing. The company has the advantage of traditionally selling its oil for a small premium (compared to some Permian operators that sell oil at a discount). Management does have a goal to spend within cash flow. But even if the company debt rises, that long-term debt balance is well within current lending guidelines. That relatively low debt (compared to cash flow) allows management a fair amount of flexibility. Recently, the banks reaffirmed the credit line.

There is every indication that this management has absolutely no intention of going broke a second time. Similarly, this management will likely entertain a very different merger proposition in the future. In fact, an all-stock deal with a company like Chesapeake Energy (which is probably still on the prowl for more oil production without a lot of debt) is very likely in the current atmosphere. A combined larger successor company should achieve better market valuation and an erasure of the bankruptcy combined with the other negative events that followed bankruptcy. That possibility should be enticing to potential investors. 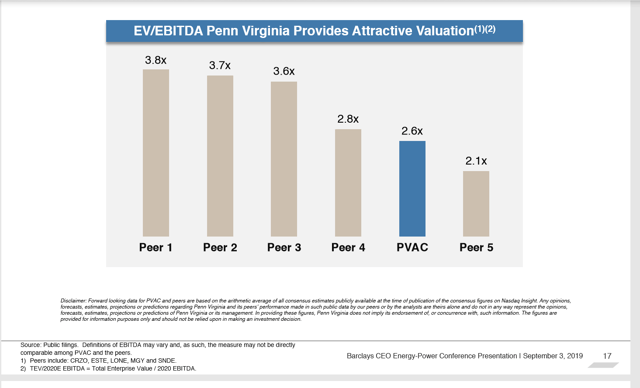 This company is cheaply priced even when compared to a lot of other out-of-favor companies in the industry. Both the price-earnings ratio and the valuation shown in the slide above are among the lowest in the industry. Sooner or later the market will focus on growth, profitability, and quarterly results. When the market does change its focus, this company should benefit immensely.

More importantly, the high ratio of oil production combined with excellent well results allows for very low costs. Therefore, this company should thrive under a wide variety of industry scenarios. This company represents one of the lower cost producers in the industry given that a high percentage of oil production. 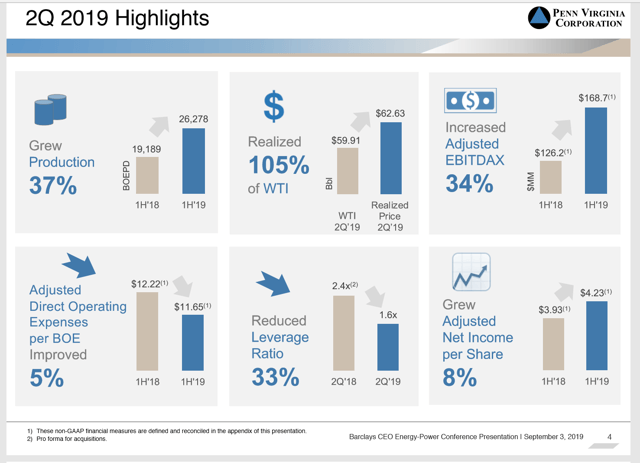 This company manages to grow production at a pace seldom seen outside of the high-tech industry. The result is increasing earnings despite the pricing weakness at the end of fiscal year 2018 that persisted into the beginning of the current fiscal year. Should the current progress continue with oil prices trading in the same range, this company could have a price-earnings ratio of one within the next five years at the current stock price.

Seldom does this type of rapid growth receive the cold shoulder of Mr. Market. As this attractive track record builds, shareholders should be handsomely rewarded long term. This company was a bargain at much higher pricing. Now, the valuation is at dirt-cheap levels.

Penn Virginia is located in the oil-rich part of the Eagle Ford. As a result, the company has relatively high margins with fast cash flow build. 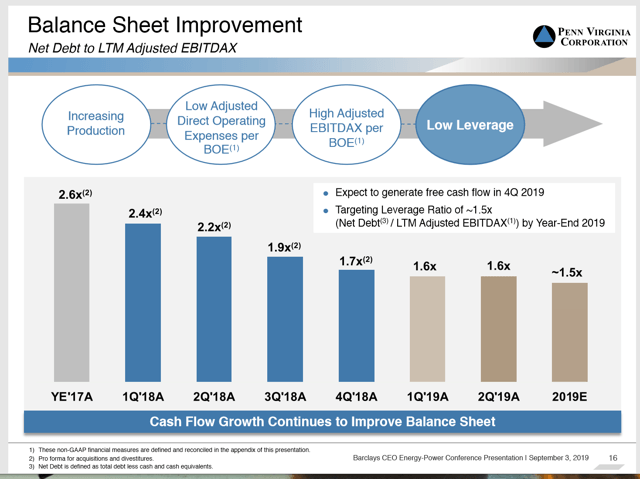 The cash flow build has allowed the company to quickly bring some key leverage ratios into conservative range. That means the company will easily withstand the next industry cyclical downturn without the threat of another bankruptcy feared by the market.

The latest guidance by management maintains that conservative debt ratio shown above. If anything, this management will seek to lower that debt ratio more. Should industry prospects improve, this company can very quickly change production levels even if management would have to borrow to begin the process. 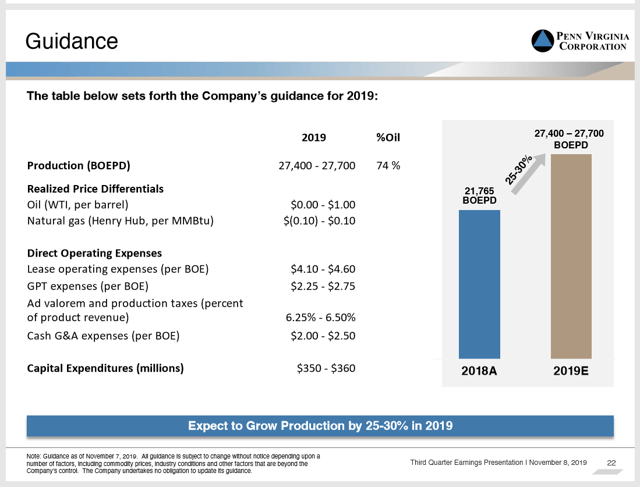 Lease operating expenses are already below the guidance shown above and, of course, production is now about the annual operating production shown above. Those facts set the stage for another healthy growth year in 2020 as long as oil prices do not sustain a significant collapse.

More importantly, this company is able to quickly grow production within cash flow. Very few companies in the industry can grow this fast within cash flow. The high percentage of oil produced combined with the premium price received (compared to WTI) allows for this fast growth. The wells in this part of the Eagle Ford pay-back relatively quickly. The low production costs from due to the decent characteristics of the acreage allow for a long-term cost advantage in the industry.

This well located company has advantages that show in above average profitability and high production growth rates. Most of the acreage is located in the window part of the Eagle Ford. The result is a high-tech growth rate at a bargain price-earnings or cash flow ratio. The kind of production growth shown by this company minimizes the long-term downside risk of the stock at current pricing levels. 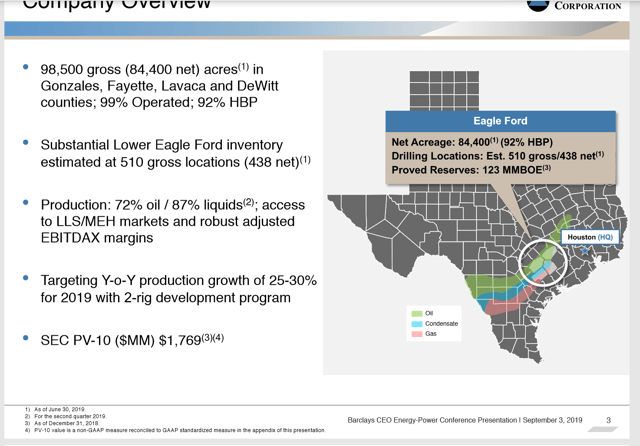 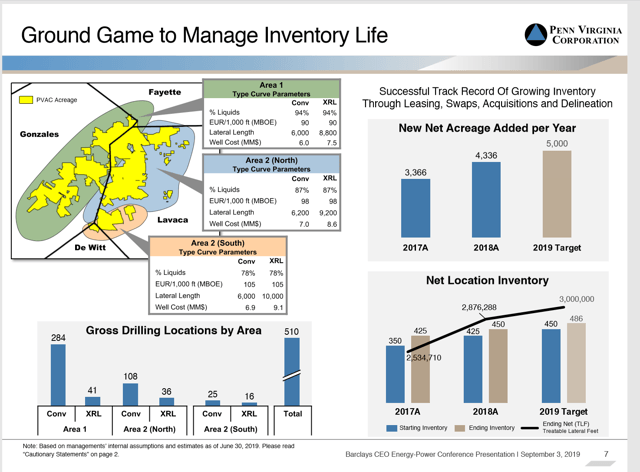 Companies that show the characteristics above can generally drill two wells in one fiscal year with the same money because the wells pay back within one year. That means this company receives the cash flow of two wells in at least part of the 12-month period for every capital dollar spent on increasing production. The rapid payback also means that the first well is flowing at a higher rate when the payback occurs. That higher rate allows for faster cash flow build when compared to (for example) a 2-year payback with correspondingly far lower average oil production.

That cash flow build shows as a very rapid reduction of some key debt ratios. A company like this has very low breakeven points that may be even lower due to the premium received for oil when compared to WTI.

There is always the industry risk of a sustained oil price downturn. But a company such as this that intends to grow at least 25% a year will triple production every five years through compounded rates of return. Given the intent to spend within cash flow, the company would then have far more production at nearly anytime in the future to service the debt load during any significant industry oil price downturn.

In the meantime, if the economy continues at current levels and oil prices remain in the same trading range or slightly lower, then the appreciation potential of the stock of this company is tremendous. Current growth rates and profitability would allow this company to trade earnings five years from now that are more than the current stock price.

Such a low valuation allows for considerable downside protection due to a misstep or two in the future. There are a whole lot of companies in the industry that would go bankrupt long before this one.

Another risk is that this management did not learn from previous missteps. But that appears to be unlikely. Far more likely is that current results will continue into the future and surprise Mr. Market into revaluing this stock. This is one of the cheapest stocks in a very out of favor industry.

I analyze oil and gas companies like Penn Virginia and related companies in my service, Oil & Gas Value Research, where I look for undervalued names in the oil and gas space. I break down everything you need to know about these companies - the balance sheet, competitive position and development prospects. This article is an example of what I do. But for Oil & Gas Value Research members, they get it first and they get analysis on some companies that are not published on the free site. Interested? Sign up here for a free two-week trial.

Long Player
15.84K Followers
Author of Oil & Gas Value Research
Get analysis on under followed Oil & Gas companies with an edge.
I am a high school teacher for a decade. Before that I was an analyst (operations and financial) and for a short time a Controller I have a B.S. with an emphasis in Accounting and an MBA (for which I studied Finance, Economics, and Management) I passed the CPA exam on the first try and am a retired CPA in the state of Maryland. I have a high school teaching credential and an MA in Math Education

I may buy PVAC without further notice.