We are just a couple of trading days from closing down a very successful decade for U.S. equity markets. This article takes a look at how returns for the S&P 500 (NYSEARCA:SPY) and its predecessor indices compared in the 2010s versus previous decades. This analysis was conducted to see if there are any themes that could be gleaned that could have predictive value for the next decade. 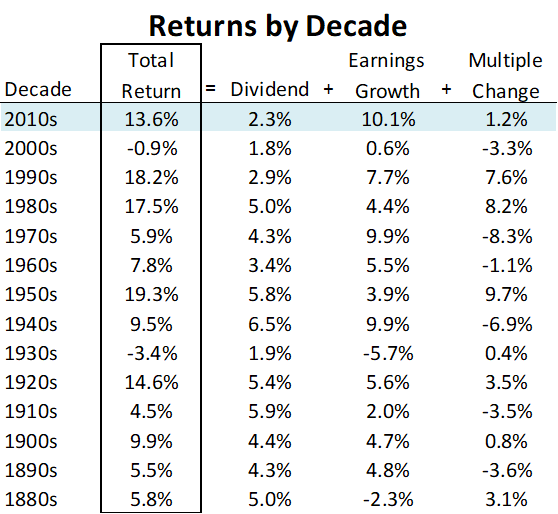 Below are my takeaways from decade-long returns covering the modern history of the U.S. stock market.

Negative returns for a decade are still rare. We have seen two decades with negative returns - the Depression-era 1930s and the early 2000s - which sandwiched the deflation of the tech bubble and the Financial Crisis decade into one ten-year period.

While current equity multiples are above their long-run trend, the solid returns of the 2010s were largely driven by earnings growth and not multiple expansion. In the century-plus dataset, the 2010s saw the strongest decade of earnings growth on record with earnings growing by more than 10% per annum. This is the most interesting observation from this analysis for me. I think if you queried the Seeking Alpha readership, many, including myself pre-analysis, would have assumed that multiple expansion was a bigger driver of returns on the decade.

While earnings growth has been a rising proportion of total returns, dividends have been a declining source. Part of this is undoubtedly linked to the rise in share buybacks, which have essentially diverted shareholder returns from one column (dividends) to another (earnings growth via share count reduction).

As we look forward to the 2020s, the best predictor of the returns from dividends might be the currently prevailing dividend rate on the S&P 500. I would expect the dividend component of returns to be somewhere in the neighborhood of 2% for the 2020s.

After the two previous decades with roughly 10% earnings growth (the 1940s and the 1970s), earnings growth fell to 3.9% and 4.4% over the next decade, respectively. The 1950s saw two mild recessions in 1953 and 1958, and the 1970s saw a significant recession in the middle of the decade following the OPEC-driven oil crisis. The 2010s, the first decade on record without a recession, will likely give way to an economic and earnings contraction at some point in the 2020s. Offsetting, some gravitational pull on earnings growth, the trend towards higher share buybacks could provide a positive offset. Overall, we should expect earnings growth to normalize to some degree. I would estimate an annualized earnings growth figure of around 6%, modestly lower than the figure achieved during the 1990s.

The big question for investors then would be what is going to happen with earnings multiples? Earnings multiples expanded only modestly in the 2010s, so one might argue that we could see further expansion in the 2020s. Multiples are above historical averages today. Part of the reason we show limited earnings multiple growth in the 2010s is that multiples were relatively high at the end of the 2000s. Multiples were high at that time because trailing earnings were low, coming off of the recession and forward earnings growth was estimated (correctly) to be quite high. If we are forecasting slower earnings growth in the decade ahead, perhaps there needs to be some multiple contraction to account for slower growth. I would estimate that we could see a contraction in equity multiples that reduces annual returns by roughly 2%.

That puts my central tendency for returns in the 2020s at roughly 6% annualized, lower than the long-run trend of roughly 9% for this full dataset, or the post-WWII average in the 10-11% area. I hope this historical analysis of decade-long returns puts the 2010s into context, and offers a degree of potential framing for the decade ahead. Please share your own thoughts in the comments section about where you forecast annualized returns in the 2020s.

Ploutos
21.15K Followers
Institutional investment manager authoring on a variety of topics that pique my interest, and could further discourse in this online community. I hold an MBA from the University of Chicago, and have earned the CFA designation. My articles may contain statements and projections that are forward-looking in nature, and therefore inherently subject to numerous risks, uncertainties and assumptions. While my articles focus on generating long-term risk-adjusted returns, investment decisions necessarily involve the risk of loss of principal. Individual investor circumstances vary significantly, and information gleaned from my articles should be applied to your own unique investment situation, objectives, risk tolerance, and investment horizon.

Additional disclosure:
Disclaimer: My articles may contain statements and projections that are forward-looking in nature, and therefore inherently subject to numerous risks, uncertainties, and assumptions. While my articles focus on generating long-term risk-adjusted returns, investment decisions necessarily involve the risk of loss of principal. Individual investor circumstances vary significantly, and information gleaned from my articles should be applied to your own unique investment situation, objectives, risk tolerance, and investment horizon.