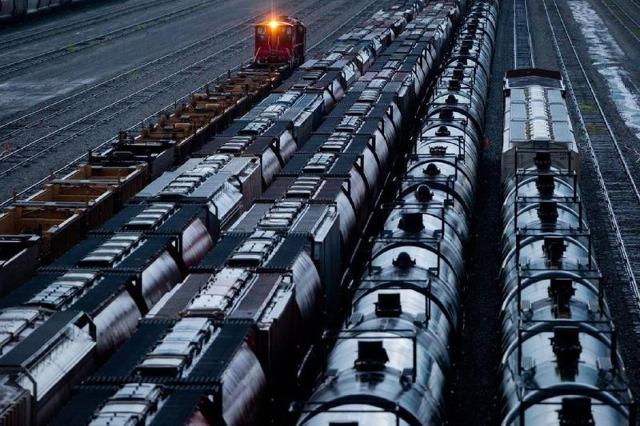 U.S. railroads have suffered from falling rail traffic for much of 2019. Those headwinds have finally reached their counterparts to the north. Canadian railroads reported a 3.7% decline in carloads and a 4.2% decline in intermodal units for the week ending December 14th. Falling rail traffic could negatively impact Canadian National in Q4. Last quarter, the company reported revenue of $3.83 billion, up 4% Y/Y. Total freight volume demonstrated flat growth, while the average selling price ("ASP") was up 4%. 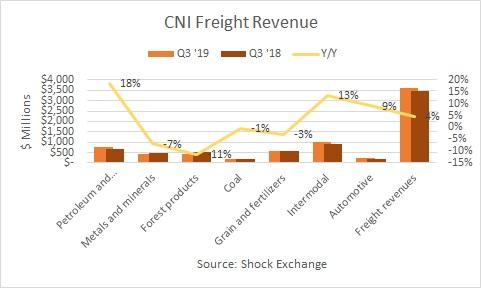 Of the company's seven product categories, only three generated positive revenue growth. Growth from Automotive, Petroleum and Chemicals, and Intermodal offset declines in other segments. Petroleum and Chemicals rose 18% due to a 10% increase in volume and an 8% price hike. Intermodal rose 13% but benefited from the acquisition of TransX, a Canadian transportation company. Automotive rose on higher volume.

Total carloads were flat. The performance was unfavorable in comparison to the 2% rise in volume in Q2. Based on falling rail traffic for the entire industry, carloads could actually fall in Q4. 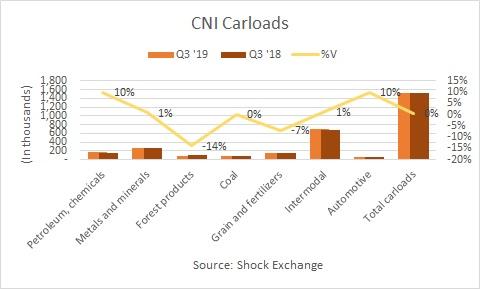 Forest Products volume fell by double digits, while Grain and Fertilizers volume was off due to lower shipments of frac sand. Such shipments could continue to face headwinds if oil E&P does not pick up. The agricultural sector could be a catalyst for U.S. railroads as China is expected to resume agricultural imports in a big way. It is unclear if the sector will spur Canadian railroads as well.

In the past, Canadian National feasted on price hikes to drive revenue growth. Such pricing power could be dissipating. 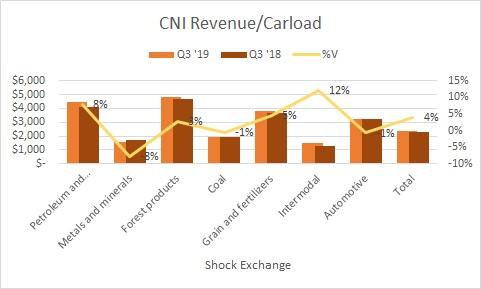 In Q3 2019, total ASP was up 4%, much less than the 8% rise in Q2. Four of the company's major product categories reported a rise in ASP. How long can Canadian National keep hiking prices to amplify revenue and earnings growth and justify its lofty share price? At some point, customers may push back on price hikes or seek alternative sources to transport their goods.

The Canadian railroads have consistently reported operating ratios of sub-60%. U.S. railroads like CSX (CSX) and Union Pacific (UNP) are now gaining ground in terms of operating efficiency. In Q3, Canadian National's operating expenses were $2.2 billion, up 1% Y/Y. Labor costs were $694 million, down 2% Y/Y. Costs for purchased services were $552 million, up 14% due to the inclusion of TransX. Lower compensation expense drove down costs for labor, while lower fuel costs drove fuel expense lower by double digits. Management made deep cuts to equipment rents and other costs, which allowed total operating expenses to grow less than revenue.

Canadian National achieved a 58% operating ratio, a 200 basis point improvement versus Q3 2018 results. The fallout was that EBITDA of $2.0 billion grew by double digits. The company recently announced it was laying off about 1,600 employees to adjust its resources to better match demand. This implies management may want to reduce its operating ratio even lower in order to offset potential headwinds from dismal rail traffic.

Will cost cuts help spur CNI's share price? CNI has an enterprise value of $98 billion and trades at 13x run-rate EBITDA (first nine months EBITDA annualized). CNI's valuation is robust for a cyclical name. I also believe cost cuts are likely priced in already. However, headwinds to the company's top-line growth may not be.

CNI is up over 20% Y/Y, yet its valuation is too robust for a cyclical name. CNI's glass is likely half empty. Sell the stock.