"You can mine for gold or you can sell pickaxes." That's what startups in Silicon Valley are often told when they set off on their dream to create multi-billion dollar businesses and change the world. Unsurprisingly, many who hear this proverb decide to mine gold anyway.

Being on the bleeding edge is exciting. But I would argue that being behind-the-scenes and providing the tools for players on this bleeding-edge is much more reliably lucrative.

One such reliably lucrative supplier is Saxonburg, Pennsylvania-based specialized manufacturing company II-VI, Inc. (IIVI) [pronounced "two-six"]. The firm claims it's a global leader in engineered materials and optoelectronic components. In other words, it creates the tiny electronic devices that harness light for a variety of different applications.

Think of the transistors in computer chips, lasers in medical devices, optical cables for broadband access and specialized lenses for military applications. They all rely on bending and manipulating light for specialized applications, and they're all manufactured by II-VI, Inc.

The company claims its patented engineered materials are used in LiDAR Sensing systems for self-driving cars, optical infrastructure for 5G wireless communications, high-energy laser systems used by the defense industry and 3D sensors for AR & VR consumer electronics. In other words, it's the cornerstone of nearly every exciting emerging technology at the moment.

As you would expect, this puts II-VI, Inc. in a particularly lucrative position. 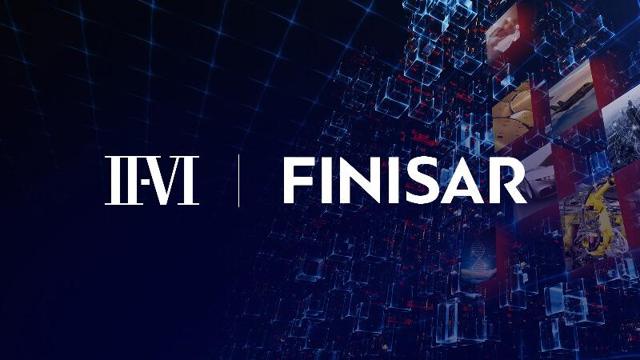 For financial year 2019, the company generated $2.6 billion in revenue. 72% of that was from the communications industry and 42% was generated in North America, however, the business (as with its products) is well-diversified across geographies and sectors.

Revenue has more than quadrupled since 2010, implying an annualized growth rate of 15.2% over the past ten years. With new acquisitions, the company believes the growth rate could be even faster over the next few decades (more on that later).

Unsurprisingly, the company is profitable. Net income for the year ended June 30, 2019 was reported at $148.7 million, indicating a net margin of 5.7%. Meanwhile, cash flow was reported at $178 million for the same period, an amount that has compounded at a rate of 14.5% over the past three years.

In short, II-VI, Inc. is a steadily expanding and consistently profitable enterprise with thin margins. Not unlike any other industrial supplier. With its vast portfolio of tech clients and patented technology, it's not hard to see that the team can sustain this steady pace of growth for the foreseeable future.

So, assuming that II-VI, Inc. maintains its favorable position at the intersection of various cutting-edge technologies and has enough firepower to develop new technologies and acquire innovative companies to keep expanding, the only question left for potential investors is whether the stock's market price accurately reflects the underlying value. 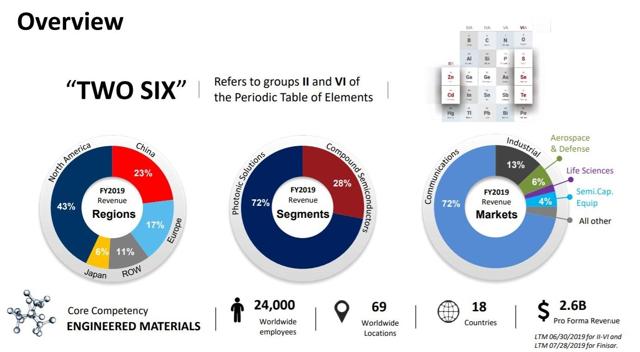 II-VI, Inc. (I kind of hope they rename the company) doesn't pay a dividend. The stock trades at a price-to-earnings ratio of 32 and a price-to-book ratio of 1.16. That seems fairly valued for a company growing at 15% a year.

But let's take this a step further. According to the company, recent acquisitions like Finisar and several others have opened up new market opportunities for the firm. Management believes that the future growth rate will be closer to 20% annualized rather than the nearly 15% it has averaged in recent years.

Here's a look at how the company's value works out under the assumption that it lives up to management expectations or grows at the same rate as before.

In my opinion, II-VI faces two near term challenges - the sagging global economy and the costs of integrating its recent acquisition of Finisar.

Industrial technology has become a leading indicator of economic distress. China, for example, imports more semiconductors than crude oil, so a slowdown in the world's second largest economy is likely to be reflected in stocks that supply nuts and bolts technology like II-VI. Indeed, worries about Apple cutting an order for iPhone manufacturing are weighing on the stock.

Meanwhile, the costs associated with integrating Finisar have dented the company's profits. In its recent statement, management says "Legacy II-VI" would have actually earned a profit of $0.34 per share for the quarter, had they not acquired Finisar.

That is also reflected in the company's adjustment of GAAP earnings, where they add back a number of one-time costs ($79 million in the one-time inventory step up, and $18 million in costs to facilitate the integration of Finisar) and non-cash expenses ($34 million in amortization) to reach their reported figure.

However, even while adjusting these one-time expenses, the guidance for next quarter is lower than expected. Q2 sales are expected to range from $590 million to $630 million, producing a pro forma profit of between $0.20 and $0.50.

That's a wide estimate, so let's take the midpoint of that range - $0.35 in quarterly or $1.4 in annualized earnings. At its current price, II-VI is trading at 21x that per share earnings estimate.

I believe a forward P/E ratio of 21 is perfectly fine for a company with diversified earnings streams, $721 million in order backlog and a Book/Bill ratio of 1.10. In fact, the stock is trading at 1.9 times annual sales, 1.24 times book value and 6 times cash per share, so the downside seems protected.

II-VI, Inc. is an undervalued and underrated opportunity for pragmatic investors looking for a long-term bet. In fact, I think it fits in nicely with the Buffett model portfolio (only accessible by my premium SA investment group).

This article was first published on November 23rd, 2019, in my Marketplace service, which is when II-VI was added to the Buffett portfolio. Since then, the stock has moved closer to its intrinsic value and is up 23.5%. Here's a look:

This idea was first discussed (in much greater detail) with members of my private investing community, Betting on Tomorrow . To get an exclusive ‘first look’ at my best ideas, subscribe today >>

Collaborating with Seeking Alpha contributor Growth At A Good Price