Baidu (NASDAQ:BIDU) has been through hell and back. After plunging nearly 70% in around a year, it has finally started to recover along with its results. We believe this marks an inflection point in which Baidu transitions from a search engine company losing market share to a leading company in AI and machine learning, and we believe this transition will be a strong positive catalyst for the stock over the long run.

Most people think of Baidu as the largest Chinese search engine, and while Baidu does have a dominant position in search through its Baidu search engine, it also operates in many other fields. For example, it owns short video apps Haokan and Quanmin - These allow users to create and share videos usually less than 1min in length, operates Baidu Knows - A platform like Quora which allows users to ask and answer questions, and even has its own interest based social media platform called Baidu Post Bar. To tie it all together, Baidu has its own super app, which allows users to access its services all in one place and includes a variety of mini-programs. The app currently has a decent 189mil DAUs. 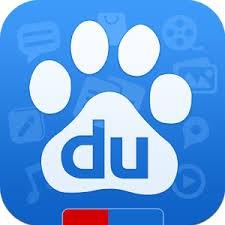 Baidu is also is a leading company in AI, with its self driving platform Apollo, its Open AI platform with over 1.5mil developers, and its DuerOS AI voice assistant device. It owns a large chunk of publicly listed Trip.com(TCOM) and iQiyi(IQ). It offers a series of products and services in overseas markets, including popIn (ad recommendation platform), Simeji (most popular mobile keyboard in Japan) and Facemoji (Simeji’s international edition).

2019 started off badly for Baidu Core, with Baidu Core Q1 operating income plunging to just $1.1bil from $5.6bil YOY despite revenue growth. However, Q3 showed a lot of improvement in multiple areas as shown below. 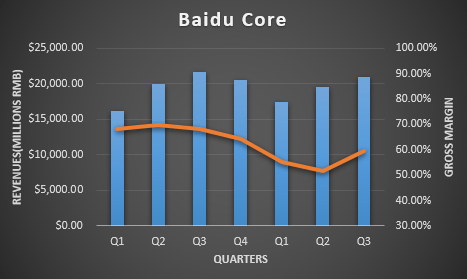 While revenue growth continues to slow, with revenue down slightly YOY, gross margins have started ticking up, rising from 51% to 59% sequentially. This increase in gross margins was what helped drive operating income to $5.2bil in Q3, up 5x from Q1 levels. 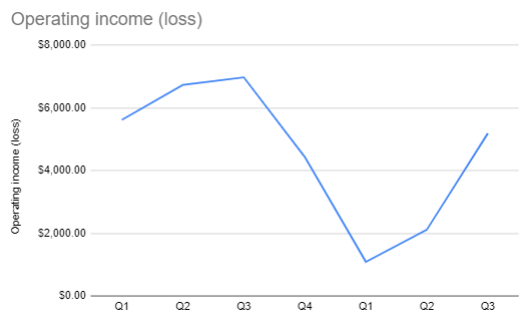 In terms of search market share, Baidu still has the dominant position, though this position seems to have weakened in recent months, with the share dropping to around 64%.

Despite its weakening position in search, Baidu is strengthening its positions in many other areas. For example, in smart speakers, Baidu became Number 2 in the world in terms of shipments.

According to Canalys, Baidu overtook Google in the second quarter to become #2 globally in smart speaker shipment, while IDC reported that Xiaodu Smart Display ranked first in smart display shipment globally in the second quarter. We believe it is important for Xiaodu smart speakers to maintain a large market share because scale will allow us to build brand, increase pricing power and reduce unit cost.

This is quite impressive considering that just 1 year ago Baidu was barely a player in the market, with less than 1% market share. While the market is still undeveloped and largely unmonetized outside of hardware, Baidu's first mover advantage would likely be very beneficial once monetization improves. 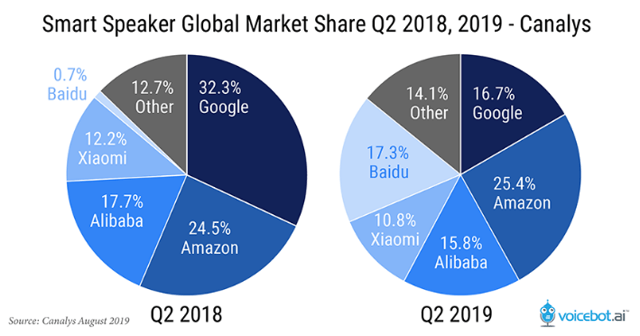 Baidu's mini-programs are also doing very well. MAUs reached 290mil, up 157% YOY, which is actually quite respectable compared to the 300mil DAUs and 230mil DAUs of WeChat and Alipay respectively.

The great performance of the new business lines culminated in over 100% YOY growth YOY of the new AI business. The business is obviously still small, considering Baidu Core's total revenue for Q3 2019 was down YOY, but considering the fast growth of the AI market, Baidu's leading position could be worth exponentially more within a few years.

Our new AI businesses, including DuerOS smart devices and Baidu Cloud, continue to see fast growth, which in total grew over 100% year-over-year. Xiaodu smart speakers saw a robust growth, and the unit economics are improving through price increases and reduction in cost of goods sold.

Overall, we were pleasantly surprised by the growth in operating income. Even though revenue continues to decline, we expect strong growth in the long run if Baidu can remain the leader in AI.

The valuation of Baidu continues to be incredibly conservative. It has a $9bil stake in iQiyi, a $2.5bil stake in Trip.com, as well as $2.4bil in cash, meaning its core business is worth around $30bil, or around 10x estimated recurring earnings after short term problems fade. This is cheap for a search engine with a monopoly position in China combined with a fast growing AI business.

There are definitely risks, though, We believe iQiyi could drag down Baidu's valuation for quite a while. The company is still in investment mode, so it'll likely not see profitability for a while, and it's facing headwinds that will likely depress revenue growth. iQiyi's growing losses will reduce Baidu's profitability and turn off some investors, which could depress Baidu's valuation for a fairly long period of time. It doesn't help that the advertising market is also in a slowdown, and this also affect's Baidu's revenues, though reliance continues to decline as Baidu diversifies its revenue streams.

Overall, while Baidu has appreciated substantially from its lows, we still think there could be significant upside if Baidu executes on its AI initiatives, while downside is protected due to its low valuation and holdings in other companies.

Disclosure: I/we have no positions in any stocks mentioned, but may initiate a long position in BIDU over the next 72 hours. I wrote this article myself, and it expresses my own opinions. I am not receiving compensation for it (other than from Seeking Alpha). I have no business relationship with any company whose stock is mentioned in this article.