When I was younger, I had the thought that "a standard of living" was simply a reflection of how much commodities a person consumed. Simply put, a person with a high standard of living consumed a lot of resources to sustain that living standard.

With that same idea in mind, I've been observing the ratio of the producer price index of commodities vs. average hourly earnings as a good measure for the cost of a good standard of living.

This is a really good measure of the state of the working-class American, both lower and middle classes too. I'll explain this concept in good detail.

Here is chart of the producer price index for all commodities. This includes commodities like food, oil, and copper; our basic energy sources and building materials that we consumer each and every day.

Now, here is a chart showing the average hourly earnings of non-supervisory production workers in the US:

Where we are at today in the U.S. is that it's never required as little number of hours of work to purchase the basket of commodities.

Consumer confidence has been at some of the highest levels we've ever seen as well. You have to go back to the late 1990s during the dot-com bubble for higher levels of confidence. 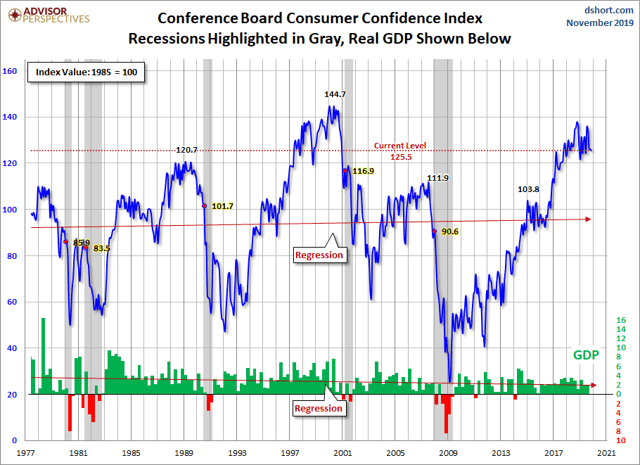 The huge jump in confidence after the last Presidential election has been sustained, I would argue, on account of lower commodity prices maintaining higher living standards for working folks on Main Street. The initial boost in confidence came from the mere fact that Trump would be pro-growth (cut regulations, boost productivity and bring back high-paying goods-producing jobs).

So, while record-high stock markets are a boon to the asset-owning class, lower commodity prices, which include things like a loaf of bread, a gallon of gas or a 4 x 8 piece of plywood to build a shed, have been a boon to the majority of Americans who fall under the working class who are just trying to make a living and take care of their family.

As we come to a close of 2019, it's worth taking a moment to reflect on how good we have it today in America economically on account of low commodity prices.

The Rest Of The World

There is no doubt, most of the rest of the world should be quite happy about lower commodity prices too.

There is an amazing chart that shows global poverty rates. Over the last 20 years, there has been an astonishing reduction in global poverty. 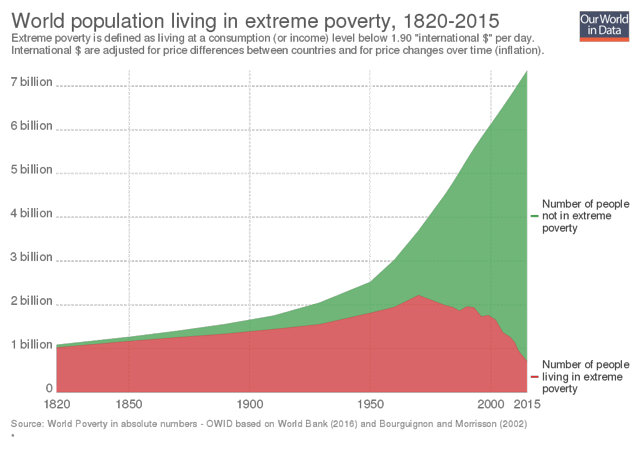 The planet is now supporting over 7 billion people that are not living in extreme poverty, which means they are consuming a decent amount of commodities.

The expression "Malthusian" comes from Thomas Robert Malthus, who held the belief that population growth could not be sustained due to limits of resources. His theory comes to mind as we are here in 2019, have near-record low commodity prices and are supporting over 7 billion people on the planet that are not living in extreme poverty. 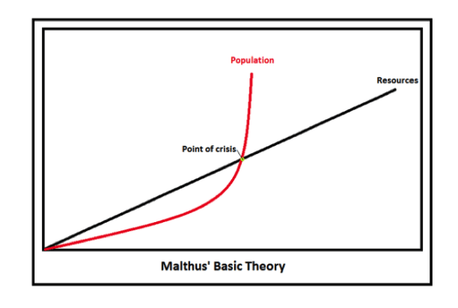 Mr. Malthus could not have ever been more wrong, but that's ok. We're supposed to learn from our mistakes, and his was just one theory society got to prove wrong.

A commodity is an input cost. It starts with Energy. Food is the energy of people, and oil, gas and coal make up the majority of energy for industry and our living standards, which include heat in the winter and AC in the summer.

So, when we look at overall personal consumption expenditures and see what percent of that goes toward food and energy, we can get a sense of how high the input costs are for our energy needs.

The 1970s were very inflationary times, and as you can see in the chart above, the percent of spending that went toward food and energy was flat to rising. Then, in the 1980s all the way down to 2001, spending as a percent went down and provided a deflationary force and rising living standards.

Spending on food and energy coincides with lower overall commodity costs and has proved to be a wonderful deflationary force.

This ratio of the producer price index of commodities ebbs and flows with time.

There are many factors that contribute to this ebb and flow.

The greatest natural deflationary force of lower commodity prices comes from economic ingenuity. Engineers and economists who economize and figure out how to produce the product for the least amount of cost. Think LED light bulbs that use 85% less energy than incandescent light bulbs. Or the new technologies for finding and producing oil and natural gas.

Other factors, including labor costs, can play a role in lowering commodity prices. Sourcing the product from a country with substantially lower labor costs could help reduce the end cost of the commodity.

Supply and demand are also factors in the rise and fall of commodity prices. Today, China is experiencing very high food inflation due to food supply problems.

Geopolitical factors that could impact trade can play a role in the cost of commodities. War and or trade embargoes, for example, can impact supply and demand.

There is a great correlation between the dollar index and the ratio of the producer price index of commodities to wages.

It would be a weaker dollar that could become the biggest factor in having a rising ratio of the producer price index of commodities to average hourly earnings.

The consequences of when the number of hours it's going to take to buy the basket of commodities rises again will have implications on inflation and living standards. It will also impact corporate profits, as commodities play a major role in input costs for most businesses.

When the prices of commodities, from oil and gas to flour for bread to plywood for your shed, are declining, everybody wins - from the wage earner who's buying these goods and services to the business owner who's purchasing these goods as input costs for their end product or service.

Reverse this and you get higher costs, which means lower living standards (back to my idea of living standard being the amount of commodities consumed) to lower profits.

All investments have risk. The key risk here I'm trying to convey is that the current state of low inflation while wages are rising very strongly doesn't always last. The ratio of wages to the commodity index justifies how low commodity prices are currently.

Rising inflation that could come from rising commodity prices is a big risk for investors. A higher rate of inflation would also make low-yielding debt less attractive. The prices of bonds will fall. Stocks could take a hit too, as profits would fall as input costs rise.

The term to get to know is "cost-push inflation." Simply put, higher commodity costs will prove to be an inflationary force.

Gold (GLD) would likely be one area that could get a lot of attention in such an environment of cost-push inflation.