2019 was an eventful year but 2020 promises to be even more memorable.

Unprecedented mandates, geopolitical turmoil, significant trading shifts, and a profound structural shift on the supply side will underpin this remarkable year.

So what does 2020 hold and what should we be watching?

Who would have ever thought that such slow-moving ships could provide for such an exciting roller-coaster market? But 2019 proved to be the case with historic market swings, trade wars, rate spikes, trade flow shifts, political turmoil, attacks on vessels, sanctions involving several entities, etc. In fact, 2019 could very well go down as the most exciting year of the entire decade.

Over at Value Investor's Edge, we feel we navigated this quite well as we outperformed the market with both our portfolios. 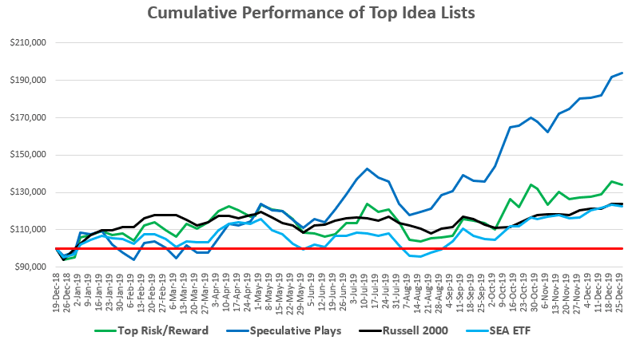 We believe 2020 could be even better!

Here, in our first of six installments, we will go through dry bulk segment offering a rough overview of what to watch and expect as the year progresses.

Of course, the danger with these forecasts is unanticipated major events, such as last year's tragic Vale (NYSE:VALE) dam collapse and the imposition of sanctions of COSCO subsidiaries, which can impact the outlook as those two specific events did in extremely dramatic fashions.

Over the course of 2019, I highlighted some very bullish developments in several segments such as LPG, LNG, crude tankers and product tankers. We also saw a bifurcated market in the containership segment where small to mid-sized vessels continued to benefit from solid rates while their ultra large counterparts were not so fortunate.

While dry bulk produced some exciting trading opportunities, this was a result of external events shaping the market rather than actual fundamentals. Unfortunately, for 2020 this means a return to fundamentals is in store, and they don't look too promising. Therefore, let's get the lone neutral to bearish forecast out of the way right off the bat.

The Vale dam collapse at the start of 2019 altered iron ore output from Brazil in a big way, creating a logistical nightmare for vessels. However, that output was quickly re-established much sooner than anticipated, creating another massive positioning snafu among the fleet.

This altered supply/demand dynamics throughout much of the year, leading to the second-worst decline in the BDI (Baltic Dry Index) at the onset of the catastrophe followed by multi-year highs as vessels that did find themselves in position were commanding a premium. 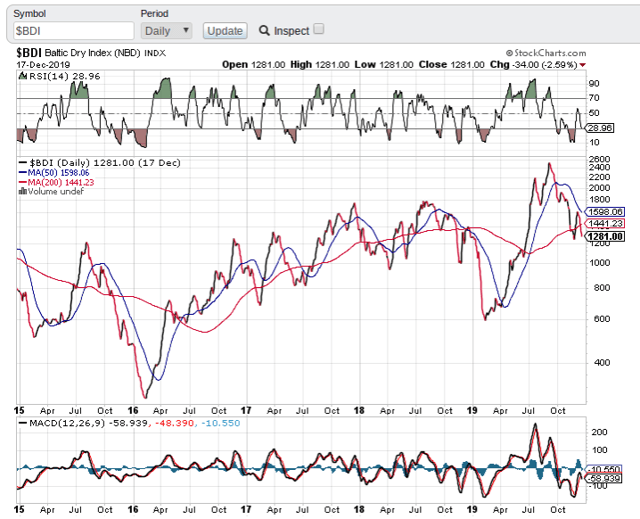 This scenario should highlight the challenges with short-term forecasting. However, as always, the structural balance will return and fundamentals will win out, the only thing in question is the time frame.

As of right now, the market is being governed by these fundamentals with only minor ripple effects being felt from the initial impact of both the Vale dam collapse and the trade war.

Of course, dry bulk is seasonal with major demand being felt toward the back half of the year and February typically offering up the seasonal low.

A recent Value Investor's Edge exclusive report of mine highlighted the changing nature of this seasonality. Specifically, we have been seeing peaks emerge much earlier in the year, due in large part to Chinese controls on coal imports which are typically felt from October onward as annual import quotas have been exhausted by that point.

This new dynamic has led to my forecast of slightly less depressed lows come the beginning of the year as coal imports regain traction once import quotas are reset. Of course, 2019 failed to provide an adequate test case as the Vale disaster disrupted underlying market dynamics.

Additionally, while seasonal peaks in the BDI can be found in December for the vast majority of recent years leading up to 2018, both 2018 and 2019 offered up their seasonal peaks before October. This can be traced to not only the curbing of coal imports but sometimes weaker iron ore imports as pollution restrictions on steel production in the winter months (which were introduced a few years ago) impact demand for the raw material.

If these trends persist we may find ourselves with a new seasonal cycle, one which peaks earlier than before but perhaps doesn't present such a sharp bearish drop come February.

Vessel supply will again pose a challenge in 2020 for the Capesize and Ultramax classes in particular. This has been a long time coming.

First, let's start with a brief note on the Ultramax class, which has the thickest orderbook coming in at 18.2%. This class should be looked at together with the Supramax class which it is replacing. When viewed in this context the orderbook becomes much less threatening. 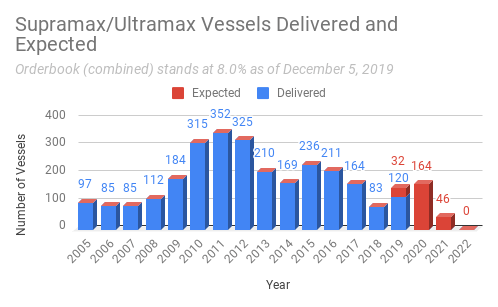 Even still, the 164 expected vessels do represent an approximate 5.4% increase in gross fleet supply which is less than ideal.

Ultramax/Supramax cargoes are composed heavily of coal and grains, which together make up a majority of cargo volume. Coal imports and trade war developments (which impact grain flows between the US and China) will be key areas to watch for this class regarding major demand developments.

The Capesize class is facing a major headwind in 2020 with regard to vessel supply.

In an exclusive Value Investor's Edge report published on September 20, I broke down the upcoming capesize deliveries and offered a bit of context.

The next 15.5 months will see 150 Capesize vessels hit the water, with seven more options possible. The 150 firm vessel orders are just 14 shy of the 164 vessels that hit the water from the start of 2017 until now.

In other words, the pace of deliveries is set to almost double through 2020 compared to the past 33.5 months. Even if recent slippage rates increase substantially, this supply will still present a challenge.

Below is a more recent snapshot of the capesize orderbook in both vessel numbers and in terms of tonnage. 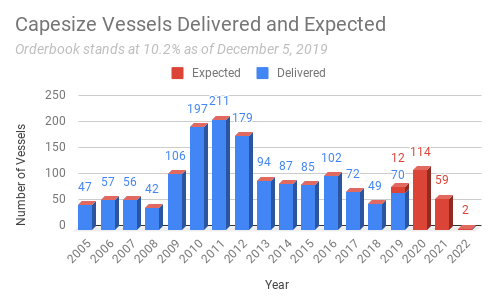 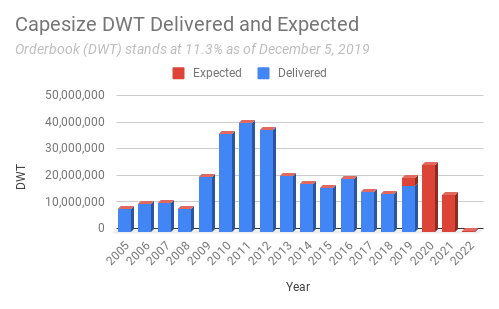 Yes, the vessel numbers do indeed present a problem, but when viewed in terms of DWT (dead weight tonnage) the situation becomes even more pronounced.

2020 vessel numbers show a 6.2% gross addition; however, in terms of capacity we are looking at a 7.5% gross addition. Scrapping, slow steaming, slippage, and temporary vessel removals for scrubber installs could all help balance out this influx, but the challenge is great.

Making the challenge even greater is the demand-side turmoil seen out of the world's most important capesize market: China.

2020 is expected to see a continuation of reduced iron ore imports into China, the mainstay of capesize demand. Furthermore, with coal composing the other major commodity transported on these large vessels, and Chinese demand sputtering while the government imposes their will, this year could indeed prove to be a difficult one for the capesize class.

Of course, two major developments could change the fortunes of dry bulk. First, a trade deal with agri-bulk benefiting. Phase 1 has already seen soy exports to China hit a two-year high, so this shows promise. Second, a major Chinese stimulus package directed again at infrastructure or construction-intensive projects. With the Chinese economy showing signs of excessive slowing (according to stated government targets) this remains a possibility even with their massive debt load.

Finally, let's address the tradeoff between coal and gas which will likely become more pronounced as environmental concerns and economics dictate the shift. Recently gas prices have fallen to extreme levels in both the USA and overseas as a supply glut, high storage levels, and warmer weather have all played a role.

It is likely that as this dynamic continues, along with domestic public and global pressure to reduce emissions, coal will continue to see market share lost to natural gas and perhaps at an even faster clip going forward as pricing is likely to remain attractive.

Conclusion and What I'm Watching

Given the expected supply influx and ongoing demand-side issues, bulk will likely muddle on through the year unless we see major developments out of China, in the trade war, or with regard to aforementioned supply-side adjustments. From this perspective it seems unlikely that the BDI will surpass 2019's highs as the capesize class composes a heavy portion of the weighting and will face the most pressure.

The main unknown for dry bulk in 2020 is if a trade war resolution is reached and what it looks like. A complete deal will likely be based upon greater US commodity penetration of the Chinese marketplace, for both agriculture and energy. President Trump likely knows the importance of the political bases often associated with these commodities (farmers, miners, drillers, etc.) as well as the contribution it would make to narrowing the trade deficit (a long-touted indicator of his).

Simply recapturing market share after sustaining losses simply can't be considered a primary victory by any commodity producer impacted by the trade war, no matter how great other ancillary accomplishments in the trade deal may be. Therefore, agribulk commodities should be factored heavily into any agreement.

While futile in the long run to bring back coal, a lifeline for US production could emerge if China agrees to import more US coal as part of the agreement. This would help dry bulk and allow for another victory claim in President Trump's widely known efforts to reinvigorate US coal. This is absolutely something that any smart political operative would be pushing for behind closed doors. Of course, dry bulk would benefit from that very long haul.

What everyone wants to know in two sentences or less is, bull, neutral, or bear?

Growing demand-side trouble accompanied by a busy delivery schedule will likely keep the BDI under 2019's peak levels. Though, I do not expect February's seasonal drop to be so dramatic this time around.

Supply-side adjustments in the form of slow steaming, removals for scrubber retrofits, and increased scrapping come the start of the year may hide some of this weakness. But as the year wears on those mitigating factors will diminish.

A Value Investor’s Edge membership includes exclusive work from J Mintzmyer, James Catlin, and Michael Boyd, along with contributions from guest authors. Members will receive a first look at new ideas, trades, and in-depth research reports. We offer a quarterly review and we post a weekly update with the latest value opportunities, research development, market analytics, income opportunities and current trades. Additionally, we do full 'earnings season' coverage of our focus coverage firms. Furthermore, we offer a full suite of exclusive market analytics. Finally, we host calls with industry leaders with ASC, DHT, and TNK all on the schedule for early January.

Follow James Catlin and get email alerts
+
Add a comment
Disagree with this article? Submit your own.
To report a factual error in this article, click here.
Your feedback matters to us!