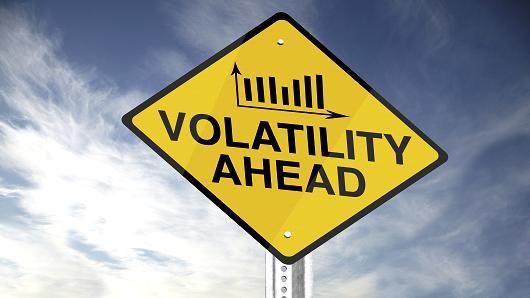 2015 was a choppy year that produced no gains: 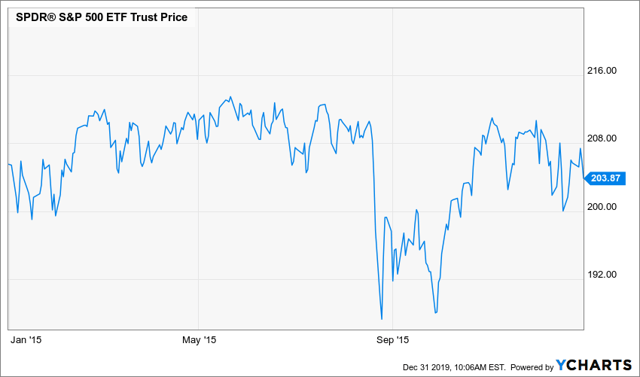 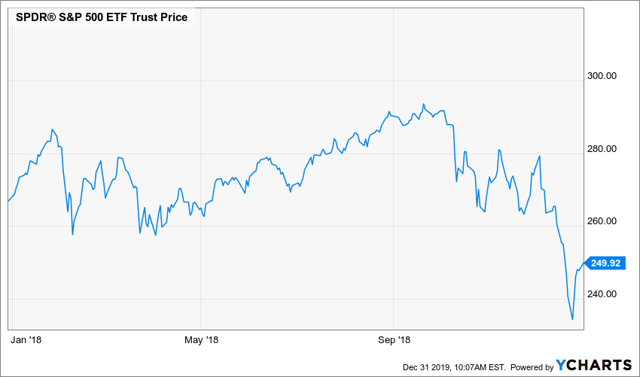 Of course, we could always get "to the moon." If you are more concerned with chasing returns than managing risk, you can position yourself for that scenario.

I recommend building a margin of safety by selling your assets with the most risk in a correlated correction and raising cash to be deployed at lower valuations in the assets we believe will perform best in the 2020s.

Various measures of stock valuation can be employed by equity investors. I prefer the measure that Peter Lynch used, which was PEG, or Price/Earnings divided by Growth. 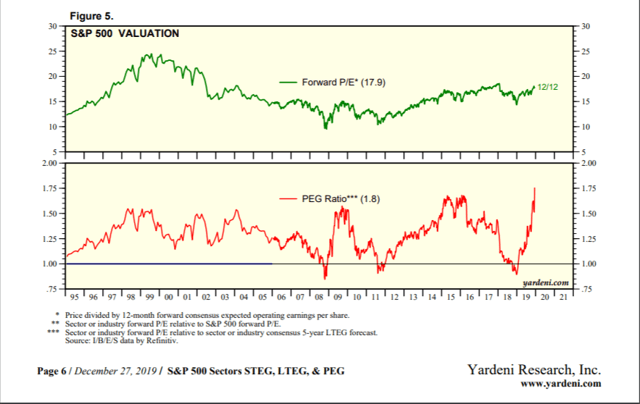 As you see, the PEG ratio for the S&P 500 (SPY, VOO) is historically high. The forward P/E ratio is also approaching significant overvaluation. Either growth needs to pick up or prices need to come down a bit to bring these valuations closer to normal.

Brian Gilmartin of Trinity Asset Management points out that "Earnings Yield" is at its lowest point in the post-financial crisis era. He does point out that the forward estimates are about to become current year. That means we need to keep a close eye on what corporate chieftains say at earnings in a few weeks about their outlook. What if earnings don't meet expectations this year?

Multiple other valuation measures are also testing levels only seen a few other times in the past century: 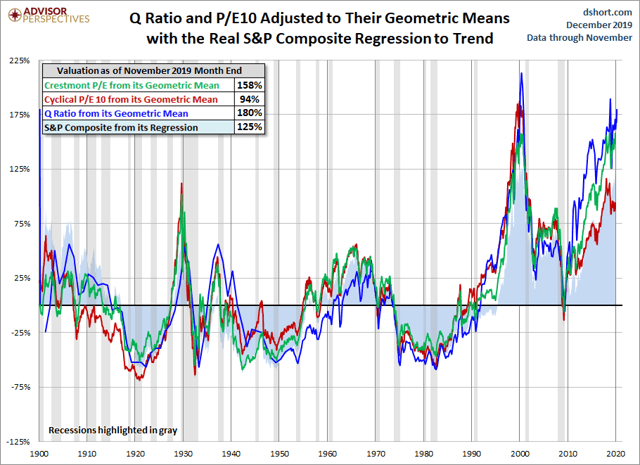 The Q ratio is Warren Buffett's favorite indicator. It is the market cap of all publicly traded companies to the U.S. GDP. Its extreme valuation may explain why Berkshire Hathaway (BRK.B) continues to raise cash levels.

I am a big proponent of following the money flow into and out of markets. Chaikin Money Flow is one of my favorite easy to follow indicators. Followed across daily, weekly and monthly charts, we can find gigantic clues as to the demand for financial assets. Price equals supply and demand, after all.

What we know about the stock market is that there is considerable seasonality to it absent events or black swans. The January Effect is one of those seasonal periods where we normally expect a rally. Why is this?

One theory for the January effect is that people who sell for tax losses in December reinvest in January. I believe there is some reality to this. Another factor is very likely that retirement plan contributions peak in January as employers make matches and people make IRA contributions ahead of tax filing.

Although there was little tax-loss selling in 2018, save for energy assets, the economy is strong with low unemployment, meaning retirement plan contributions should be significant.

Pensions and Boomers Will Continue To Sell In 2020

Over the course of the year, however, we know that pensions and retirees will continue to take money out of the stock market. Pensions are now perpetual net sellers due to few young contributors and more Boomers reaching retirement. 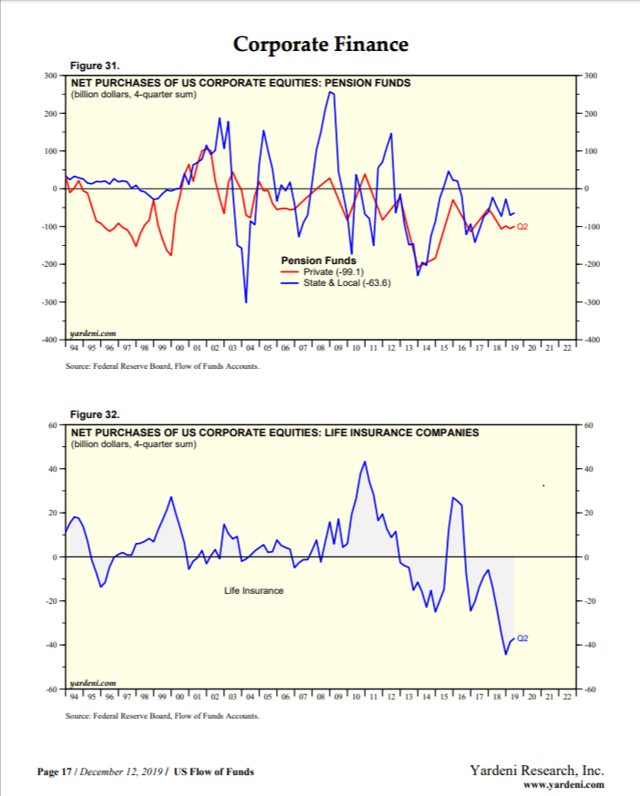 I included life insurance net purchases of equities here because those companies are more tactical in their purchases. That is, they try to buy low and sell high. Notice their selling the past few years. Certainly, some of that can be attributed to more death claims with an aging population and the massive move towards term life insurance versus whole life. It's interesting nonetheless and does have a long-term downward bias, at least reducing another source for demand of corporate equities.

We also know another year's worth of Boomers are hitting the age for Required Minimum Distributions, or RMDs, from their IRAs and other retirement plans. Over 300,000 people will take their first RMDs in 2020.

Those demographically driven withdrawals from stocks are the leading reason that, on net, there is virtually no new demand for stocks other than corporate share buybacks.

As I covered in "The Buyback Bubble Will End Badly," the marginal buyer of stocks has become corporations themselves. That is, there is no net demand for stocks other than companies buying back their own shares. Consider that for a moment longer, it's extremely important.

Without a surge in stock buying from demographic drivers or foreign buyers, stock prices are even more tied to corporate earnings. We know that about half of stock buybacks are funded by debt. If earnings falls, then debt becomes harder to finance and cash flow for buybacks falls. 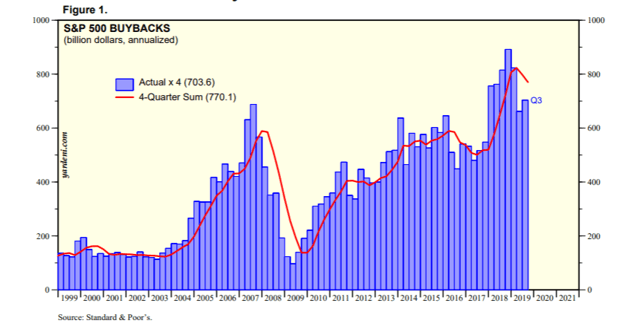 With a wave of corporate debt refinancing coming, there are multiple worries that investors should have about buybacks persisting at such high levels for much longer. Slower economic and earnings growth would be a harbinger for a deeper decline in share buybacks and net demand for stocks.

Is China Trade Deal A "Sell The News" Event?

I have discussed with subscribers and in my webinars on YouTube that I believed the trade war as executed was a mistake. My initial read in early 2018 was that China would string out negotiations, give little and only agree to deals that gave them what they needed.

It was just announced that the Phase 1 trade deal would be signed on January 15th. But what does that really mean? It basically means that China gave little after a prolonged negotiation and is getting the food and resources they need. Essentially what I said would happen.

A new Federal Reserve report further backs my skepticism of the trade war and deal. The conclusion: “We find that the 2018 tariffs are associated with relative reductions in manufacturing employment and relative increases in producer prices...”

So, is there anything in the trade deal that really moves the needle going forward? Probably not. Here's most of what we know is happening:

In other words, the trade war moved from full-on to take a step back and pause. Most observers and traders recognize this. I think the trade deal is a "sell the news" event come mid-January.

Because I believe that 2020 is not shaping up to be as bullish as many are forecasting, I am inclined to raise cash further if the stock market rises in early 2020. Most of our portfolio strategies are already indicating to raise cash to around 50%.

If the broad S&P rises to another new high by mid-January, I would be inclined to raise cash as high as 75% by the third Friday in January. What does that represent? The third Friday is, of course, an options expiration.

While options expiration does not always suggest volatility, I believe it will this time. Many traders will be apt to trade a rally for a small correction after the trade deal, with the added expectation that corporate earnings will not be particularly bullish.

If we get a correction in the middle of the first quarter, I do not expect it to be terrible. Rather, I would expect it to be a set-up for the completion of a first-half 2020 rally, and should be bought at least for a swing trade to mid-year. 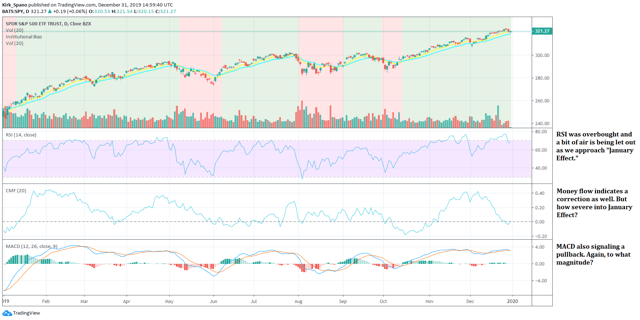 All trading strategy depends on your risk tolerance and trading style. I am typically a position trader, i.e., looking for assets I can hold for at least a year. Until valuations come down and economic uncertainty declines, I do not think I will find many position trades soon.

As such, I am positioning myself for wading into a long swing trade if there is a small correction soon. The easiest asset to buy on a short shallow correction is the Invesco QQQ ETF (QQQ).

The QQQ is is composed of the Nasdaq 100, which contains many of the "new economy" blue chips. Companies such as dividend payers Microsoft (MSFT) Apple (AAPL) as well as growth stalwarts Amazon (AMZN) and Google (GOOG) lead that index.

The QQQ has far outperformed SPY over multiple time frames, even inclusive of the "dot-com" bust, for total return. 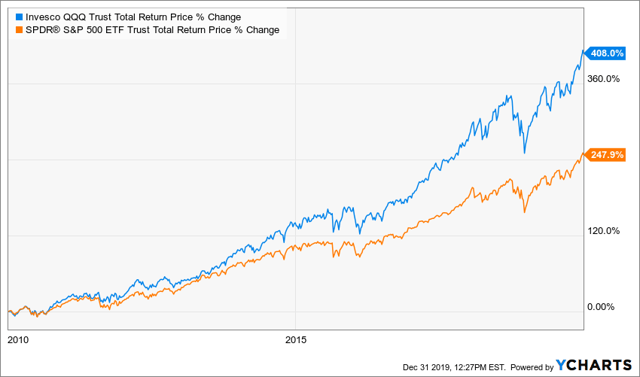 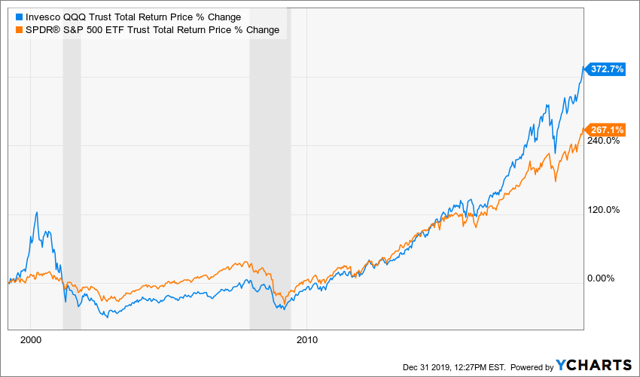 That simple way to understand the differences between QQQ and SPY is this:

That is, of course, a generalization but carries a lot of merit. My research shows that about one-third of companies in the S&P 500 are at risk of massive business declines in the coming decade. Many higher-debt and lower- or no-growth dividend stocks are at particular risk - as discussed in this MarketPlace Roundtable discussion with other analysts.

In short, I prefer QQQ and cherry-picking the best out of the S&P 500 when opportunities present. I am setting limit prices for buying QQQ on any correction. See our "Very Short Lists" for support and bottom-fishing prices.

New Year's Special - Contact Kirk Spano through his profile by direct message to receive your first year with Margin of Safety Investing for half price. Simply put "half price" in the subject line.

Additional disclosure: I own a Registered Investment Advisor, but publish separately from that entity for self-directed investors. See relevant terms and disclaimers at the website of Bluemound Asset Management, LLC. Any information, opinions, research or thoughts presented are not specific advice as I do not have full knowledge of your circumstances. All investors ought to take special care to consider risk, as all investments carry the potential for loss. Consulting an investment advisor might be in your best interest before proceeding on any trade or investment.