Methanex (NASDAQ:MEOH) converts natural gas, or methane (CH4), to methanol (CH3OH). First, where are Methanex’s facilities? They are scattered all over the globe: Trinidad, New Zealand, Egypt, Canada, the United States, and Chile. Methanex is a global operation – sourcing materials globally, and marketing methanol globally.

What is methanol used for? The largest uses are for the production of methyl methacrylate (plastic), gasoline blending, and olefin (unsaturated hydrocarbon) production. Natural gas is the major process input, while methanol is the process output. We can therefore conceptually understand Methanex’s operating income as thus:

Whether investors should be bullish about Methanex, therefore, depends on three components:

This article can only provide a cursory glance at how to price MEOH shares – these markets are vast and highly complex. Needless to say, the forecast here is purely the author’s own speculation based on the data researched here. 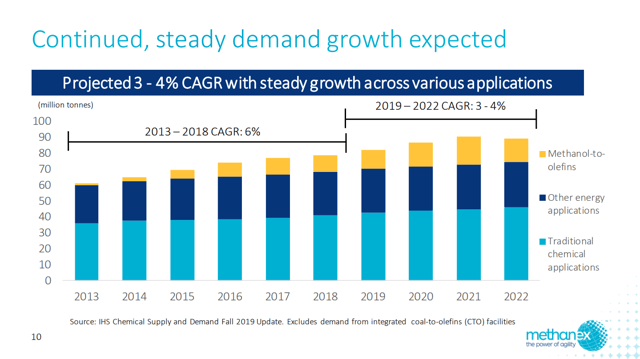 The main takeaway here is that Methanex expects global demand growth to decelerate, with 2019 being an inflection point. Reading the S&P Global 2019 H2 Outlook, we can take away these following key points about recent developments:

How can we synthesize this information? In the near term, it appears that world methanol demand growth is decelerating at the same time that new production facilities are coming online. This is a bearish signal for methanol prices.

Regarding world demand: Reading a CNBC article from June 2019 - there is one big key point: Global demand grew 4.8% in 2018, but demand growth is expected to average 1.6% per year through 2024. This is a slightly bearish signal for world natural gas prices.

Overall, putting together a bearish signal for methanol prices and a neutral signal for natural gas prices, we might predict a compression in gross margins in MEOH in the near future. Therefore, we should be bearish on MEOH share prices.

Sifting through SeekingAlpha’s Key Data for MEOH, I will put together a select few rows to demonstrate Methanex’s financial straengths.

Bear in mind that Methanex is a Canadian company, so these USD figures are 100% representative of their financial results, due to forex fluctuations. MEOH is a cyclical business, so rather our goal is to examine management’s capital allocation habits.

Here are the main takeaways:

This paints a picture of a company that:

The overall verdict? MEOH is a very solidly run cyclical business, with a management that understands how to manage cash flows through the methanol market cycle. However, I believe that there are downward pressures on its gross margins, hence MEOH is not a buy at current price levels.

When methanol prices are low, though, is the best time to pounce!