This article was selected to be shared with PRO+ subscribers - find out more here. 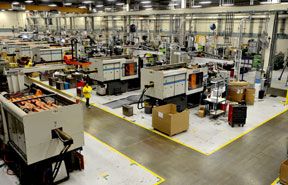 When I drill down, my investing mantra comes down to this. Upside potential must significantly exceed downside risk.

I can find no better example of such a stock than Key Tronic Corporation (NASDAQ:KTCC). The downside is protected by a strong balance sheet. It meets the definition of a net net (trades well below working capital). In fact, the stock price is less than working capital even when interest bearing debt is subtracted. What's more, the company, while underperforming, has been steadily profitable and has strong catalysts to increase earnings. The final test is what I will call the floor factor. The stock has stopped declining on missed guidance. That indicates it will take quite a large miss or adverse turn to move it down significantly. Meanwhile the upside potential is double or even triple the current price of $5.40. The company had EPS of over $1 twice earlier in the decade and has significantly more revenues now on the same share base.

Key Tronic is an electronic manufacturing services (EMS) company based in Spokane Valley, Washington. It turned 50 this year and started out manufacturing keyboards. Today, almost all its revenues are from contract manufacturing for other companies. It designs and manufactures electronic products, and also is involved in mechanical engineering, sheet metal fabrication and stamping, and plastics. It has plants in Mexico, the U.S., China and Vietnam. As of June 29, 2019, plant square footage by region was; U.S. 43%, Mexico 43%, China 7% and Vietnam 7%. Key Tronic's sweet spot is customers products with annual revenues of $10 - $50 million per year.

Key Tronic, while steadily profitable, has underperformed in recent years. Financial results for the last four fiscal years and most recent quarter are shown below.

Key Tronic had EPS of $1.15 in FYE 6/14 and $1.10 in FYE 6/13 on revenues of $361 million and $346 million. Revenues then increased about 30% primarily from an acquisition in September 2014. Earnings and revenues then declined moderately as two of their largest customers significantly decreased their business. Smaller new business offset some of the revenue losses. Just as things started rolling again in 2019 new challenges arose. There was a large shortage of a critical component, trade tension with Mexico and delays in a large ramp up.

In the most recent quarter, revenues of $105 million missed guidance of $110 - $115 million. This was actually blamed on too much business which caused bottlenecks, especially in the sheet metal operation. Management believes that those revenues were delayed not lost and that all bottlenecks are now resolved. EPS was $0.14 which met guidance of $0.12 to $0.17. The EPS met guidance despite lower revenues due to lower operating expenses.

The company has added capacity. It recently started up a new plant in Vietnam to take advantage of its low labor costs and companies that want to move manufacturing out of China due to tariffs. This operation is ramping up so is currently lowering net income moderately.

Inventory on September 28, 2019 was $117 million, up $17 million from one year earlier. This was due to the bottleneck that is now resolved.

The setbacks have been short to intermediate term and most appear behind. Granted this is the type of business that can quickly have new disruptions. However, Key Tronic now has significant strengths and catalysts to drive earnings up going forward.

1. Balance Sheet - Key Tronic has a strong balance sheet that can be immediately used for acquisitions, stock buybacks or dividends. As of September 28, 2019, it had a tangible net worth of $115 million and working capital of $110 million. In fact, working capital, even when deducting interest bearing debt, was still $61 million. That exceeds the current market cap of $58 million. Note that working capital is primarily comprised of inventory and accounts receivable. The $4.5 million legal settlement noted in the chart above was a write-off of both inventory and receivables from one customer during the year ended June, 2018. There have been no other write-offs in the last 4 fiscal years. The company is not currently paying a dividend or buying back stock. Its priority is acquisitions and paying debt down more.

4. Market Position - This may be the best reason to invest in Key Tronic. It is perfectly positioned to take advantage of the trade war with China and the move toward outsourcing. It has a large and growing operation in Mexico and just opened one in Vietnam. Those two nations are two of the top two picks for moving manufacturing from China. Both have significant unused capacity. Even if the trade war with China goes away, the fear of a new one will cause manufacturing that once went there to go to Mexico and Vietnam.

5. Pipeline - Due in part to the trade war and a doubling of sales reps in the past year, the pipeline of new business is very high right now. These are two large tailwinds going forward.

7. Buyout Bait - Key Tronic's geographical positioning, expertise in its industry, and low price to book make it an acquisition target. Management does not own enough shares to block one.

Key Tronic has a long track record of missing guidance, going back 5 years. Prior to that, under the same CEO it consistently met or beat guidance.

Management owns less than 5% of the stock.

Customer concentrations have been an issue in the past as much of their struggles are with declining business from their largest customers. In the FYE 6/19, the largest five customers were 41% of revenues. This is down from 62% prior to the Ayrshire acquisition in 2014. Currently only one customer is over 10%. The company is improving here but this is still an issue.

The EMS industry in general is growing steadily but has low profit margins. Most publicly traded companies trade at P/E ratios below the market average. I believe that is due to the low margins, cyclicality and revenue volatility.

Key Tronic is in a cyclical industry, outsourced manufacturing. The U.S. economy recently has shown moderate declines in manufacturing, though some of that may be part of a long-term trend of outsourcing to companies like Key Tronic in other countries.

Key Tronic earned $0.14 last quarter, a quarter that was depressed by bottlenecks and ramping up a new plant in Vietnam.

Shown below, Key Tronic is compared to the other publicly traded EMS manufacturers.

Based on removing the non-recurring items last quarter, and quarterly earnings in the range of $0.25-0.30 in 2013 and 2014, I believe annual earnings can return to $1.00+ per share within the year. With an industry average P/E of $15, that values the stock at $15. This P/E incorporates five much larger companies. It is apparent in this industry that scale reduces the volatility. In my opinion a better P/E for Key Tronic is 12, resulting in my one-year price target of $12.

Key Tronic stock is cheap for a reason. There has been one obstacle after another over the past five years. Despite this, the company has remained profitable, with stable revenues, and a strong balance sheet. My primary thesis here is, at this price level there is significant balance sheet downside protection and upside earnings potential. The company has several catalysts that should help such as; a much larger salesforce, beneficial geographical positioning for the China trade war, a continuing manufacturing outsourcing trend, and an increasing pipeline. I recommend a long position in Key Tronic.

Jeremy Blum
7.18K Followers
Tipranks.com currently has me ranked in the top 1% of all Seeking Alpha and similar sites writers.  I was the Credit Manager for a mid-sized publicly traded bank and retired early in 2013. Despite never working in the industry, I took and passed the CFA Level 1 exam. I usually only write about companies that are my best ideas and I have a position in. I traditionally have invested in and written about small and micro cap deep value stocks. As an investor you can get an edge in researching and talking to management of small and micro cap companies that have little or no analyst coverage. About 50-75% of my portfolio are deep value stocks, primarily microcaps. That is historically where I have had the best returns.

Disclosure: I am/we are long KTCC. I wrote this article myself, and it expresses my own opinions. I am not receiving compensation for it (other than from Seeking Alpha). I have no business relationship with any company whose stock is mentioned in this article.