Air France-KLM (OTCPK:AFLYY) made headlines over the past year due to strikes, but there are underlying issues with this airline which make its stock one for investors to steer clear from in my opinion.

The strikes over pay disputes which plagued Air France-KLM were far from being minor annoyances. They caused months of disruption, resulted in millions of euros lost, and forced the resignation of the group's CEO Jean-Marc Janaillac. His replacement, former Air Canada (OTCQX:ACDVF) executive Ben Smith, managed to cut a deal with union bosses which ended the strikes in October. Rising fuel prices also have eaten into the group's bottom line in the present financial year, though only the Q1 2019 results reflect that impact as Smith implemented cost-cutting measures to offset the fuel price rises.

Air France-KLM looks set to have a decent 2019 overall, which continues a trend of steady revenues and fluctuating net income that is reflected in the results that the airline has reported over the past five years. Incidentally, the negative net income figures for 2014 were due to strikes that protested shifting their short-haul and domestic service to Transavia, their low-cost Dutch subsidiary - showing the recurring nature of strikes as an issue for the business.

These figures would suggest that neither the strikes nor the fuel price rises have greatly impacted Air France-KLM, and long-term that is the case. Given these figures, and the fact that the stock is trading around the $10 range with a price-to-earnings ratio of 14.48, a prospective investor could certainly think that Air France-KLM would make a fine addition to their portfolio. 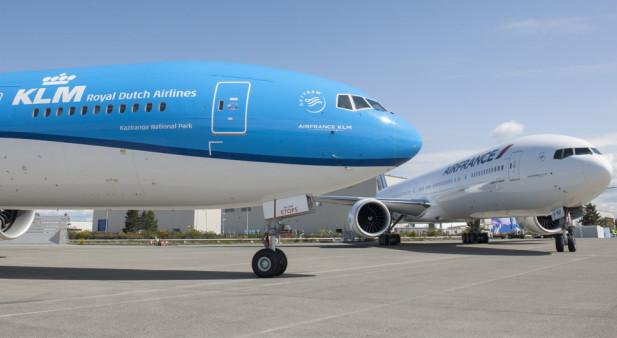 Air-France KLM is the only airline with two hubs at Europe's major airports. Image provided by Air France-KLM.

Air France-KLM certainly possesses attributes beyond these figures that are enticing. Their two main airports, Paris Charles de Gaulle Airport and Amsterdam Schiphol Airport, are two of Europe's top five airports by seat numbers, and position Air France-KLM as the only airline with two hubs at Europe's major airports. Combined with a network that gives customers access to 318 destinations in 118 countries, and the fact that over 101 million passengers availed of this network for their travels in 2018, and Air France-KLM seems like an attractive pick.

However, there are more compelling reasons to leave this one alone. The strikes mentioned above testify to how much power the pilots at Air France-KLM have, and the potential for further losses that could be incurred when that power is wielded.

More seriously is the competition from low-cost carriers such as easyJet (OTCQX:EJTTF) (OTCQX:ESYJY). This is something that Air France-KLM have attempted to overcome with their own low-cost offerings, but these have either been stymied by strike action as in the case of Transavia, or have suffered from a lack of proper brand management - another lower-cost subsidiary targeted at millenials, Joon, was so mismanaged that Air France-KLM simply reabsorbed it in June 2019.

Brand loyalty is a problem for many big airlines, as flyers do not have loyalty to any particular airline. This is what allows the low-cost carriers to undercut big players such as Air France-KLM in the first place. The economic uncertainty that this higher level of competition engenders throws into question its viability as an investment. This is further compounded by the capital-intensive nature of airlines: planes and other fixed assets require vast amounts of capital, and if income is uncertain the profits left over after the necessary capital is allocated can be paltry. This is reflected by the operating margin (trailing twelve months) of 3.59% and the return on equity (also trailing twelve months) of -5.12%.

Indeed, it has to be said that Air France-KLM's financial position overall is less than alluring. In the short-run, total current assets of €9.03 billion ($10.14 billion) in combination with cash-on-hand of €4.11 billion ($4.61 billion) and total accounts receivable of €3.72 billion does stack up tolerably - albeit not spectacularly - against total current liabilities of €13.19 billion ($14.81 billion). However, the long-run looks less promising: a net worth of €1.37 billion ($1.54 billion) stacks up poorly against long-term debt of €9.81 billion ($11.01 billion).

In light of the issues with Air France-KLM's lack of brand loyalty, with how capital-intensive airlines in general are, with how Air France-KLM's profits are eaten into by low-cost carriers, and how ineffectively its has penetrated the low-cost carrier market themselves, I expect these debt burdens to grow going forward. Further issues with strikes, in light of the recent history Air France-KLM have had, are also likely, and will also adversely affect the business. Consequently, I see this as a value trap, and one that any prospective investor would be wise to avoid being ensnared by.

Cash-Centered Creep
3.76K Followers
Buy and hold, common stock investor focused on dividends and on value. Interested in various stocks that are suitable for long-term dividend investment. A Buffett admirer, but not a Buffett cultist, and not quite as creepy as my name implies - though certainly cash-centered!
Follow