AUD/JPY is currently making higher highs and lows in the short term (despite a recent fall into 2020).

However, the bond market is pricing in a two-year yield spread that is on the contrary making lower highs and lows (presenting a divergence).

Equities are also still on the rise, in spite of AUD/JPY itself falling most recently into the new year of 2020.

Traders should therefore be cautious in the short term, as should AUD/JPY ultimately follow the bond market's recent signalling, we could see a decline in risk assets to include U.S. equities.

Given the short-term central bank rate spread between Australia and Japan of +0.85%, the current two-year spread for AUD/JPY of more than +1.00% is potentially still too optimistic, and hence there still remains plenty of potential for the bond market's downward trajectory to continue, further increasing the possibility of downside in AUD/JPY.

The AUD/JPY currency pair, which expresses the value of the Australian dollar in terms of the Japanese yen, is a popular barometer of risk sentiment in financial markets. This is mostly owing to Australia's positive interest rates in addition to its ongoing (and historical) association with commodities, which makes it a so-called commodity currency, alongside other currencies like the New Zealand dollar and the Canadian dollar.

In short, when global risk sentiment increases, commodities tend to rise and investors search for yield (positive interest rates), making currencies like the Australian dollar more attractive. That is, relative to so-called safe-haven currencies like the Japanese yen (the other side of the AUD/JPY pair), which often becomes increasingly appealing to investors in economic downturns and/or market corrections.

Japan's domestic investment crowd (including retail traders, as well as institutions) are known to search for yield abroad, given their negative rates at home. In fact, the term Mrs. Watanabe was even coined, which (per Investopedia's definition) is used to describe the "archetypical Japanese housewife who seeks the best use of her family’s savings." In practice, during market corrections and other risk-off events, the Japanese yen is expected to strengthen as investment flows return to Japan (a long-JPY event, all else equal).

The Japanese yen is also a useful indicator; if we see that the Japanese yen is strengthening when equities (for instance) are rising, something is usually 'off' and usually it is the equity market that is 'wrong.' In other words, divergences tend to close, and the Japanese yen is often a leading indicator rather than a lagging one. An example is shown below with the USD/JPY pair.

The shaded area in the chart above shows how S&P 500 futures (represented by the daily candlesticks) were rising, in spite of the USD/JPY pair falling (illustrated by the red line, set against the far-right y-axis). The weakness of USD/JPY meant that the Japanese yen was rising against the U.S. dollar. While the U.S. dollar is also viewed as a safe-haven, especially per the 'Dollar Smile' theory, the Japanese yen is generally expected to experience more upside volatility than the USD during market difficulties.

In short, divergences between risk assets and yen crosses should always be watched carefully.

The image above provides a quick summary of 'Dollar Smile Theory': the idea that the U.S. dollar is likely to rise in times of both risk aversion and risk-taking; weakness is expected when the U.S. economy underperforms on a global scale.

In other words, if the U.S. economy is viewed as strong, flows are expected to enter the U.S. and hence strengthen the USD. When global risk sentiment is weak (especially during crises, such as in 2008), the USD is also considered a likely safe-haven (and hence also expected to strengthen during these times). Weakness, however, is expected when global risk sentiment is not necessarily weak, but the U.S. economy is underperforming (i.e., the appeal of U.S. assets is low enough to "override" any prevailing risk aversion more globally).

The theory above is merely conceptual and does not necessarily hold, but it is a useful model to use. The Australian dollar potentially presents a simpler dynamic: when risk sentiment is high, the AUD tends to appreciate. If risk sentiment is low, the AUD tends to depreciate. What matters for the AUD is the market's perception of both the attractiveness of risk-taking in general and the performance of the Australian economy specifically. Because of Australia's commodity export exposures, these two factors (risk-taking and commodity prices, and Australia's economic performance) tend to be correlated positively. 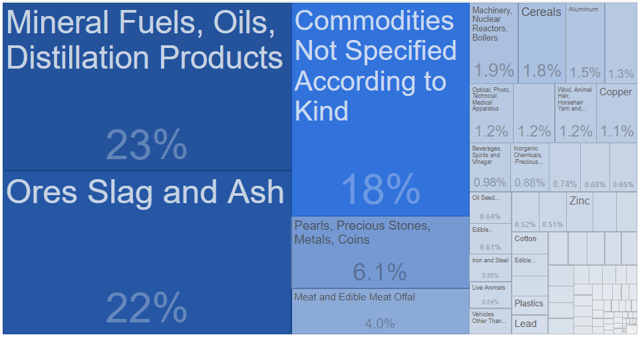 (Australia's major exports by category, each measured as a percentage of the country's total exports. Source: Trading Economics.)

If the AUD/JPY is rising, we might perceive positive global risk sentiment. The reverse might be true; if the AUD/JPY pair is falling in spite of rising equity markets (for instance), the divergence is likely to close with a fall in equities. The relationship does work both ways, however; rising valuations in risk assets (equities, commodities, etc.) can "convince" risk-on pairs like AUD/JPY to rise. In other words, the line of causation can flow both ways, but usually FX pairs are indicative rather than lagging.

The chart below shows the AUD/JPY pair most recently diverging (in the past couple of days, at the time of writing), potentially, although the correlation is still largely intact and we still see little difference in the moving trajectories of S&P 500 futures (represented by the daily candlesticks) and AUD/JPY price action (indicated by the red line).

As we can see, the two-year yield spread is moving downward, and only recently are AUD/JPY spot prices following the same trajectory. The question now becomes, will we see further downside, or is the bond market "wrong"?

In fact, the bond market may be heading in the right direction. As we see AUD/JPY spot prices and interest rate spreads moving in opposite directions (i.e., the former is making higher highs and lows, and the latter is making lower highs and lows), we should check to see whether the short-term spread in question is appropriate.

This is important as currencies whose interest rates rise relative to the rates of others generally become more attractive for carry traders (i.e., one can borrow the cheaper one as a 'funding currency' to purchase the higher-yielding currency). Weakening interest rate spreads, therefore, tend to translate into weakness in the currency pairs to which those falling spreads relate.

In the chart above, we see the spread is positive by about +1% (almost exactly). The table below, on the other hand, highlights the central bank rates of Australia and Japan.

Notice that the Reserve Bank of Australia lowered rates by 25 basis points to +0.75% in October 2019, whereas the Bank of Japan last lowered rates by 20 basis points to negative -0.10% in January 2016. Netting +0.75% and -0.10% together takes us to an implied spread (per central bank rates, which tend to translate into the bond market) of +0.85% for AUD/JPY. In other words, despite the two-year bond yield spread (as shown in the chart preceding the table above) having already fallen (making lower highs and lows), it is still potentially optimistic.

In short, we can see that there is further room for the bond market to drop the two-year AUD/JPY bond yield spread, and therefore it should become increasingly difficult for the market to justify higher spot prices, as currencies and their interest rate differentials generally link up strongly. Going forward, we should watch out for a fall in the AUD/JPY pair, and for that matter, possibly a fall in risk assets such as U.S. equities.