With two bidders, Hudson's Bay Company (OTCPK:HBAYF) is a must-follow stock at less than CAD 10.3 per share. Besides, we believe that the company did not contact many potential acquirers, which may lead to additional acquisition proposals. The company has debt, which is not ideal. However, it trades at only 9.1x 2020 EBITDA, which is cheap. Notice that the market expects the company to see an increase in its EBITDA margin in the following two years.

Founded in 1670, HBC is a Canadian retail business group, which trades in the Toronto Stock Exchange since November 2012. HBC operates a chain of department stores that operates in Canada and the United States. 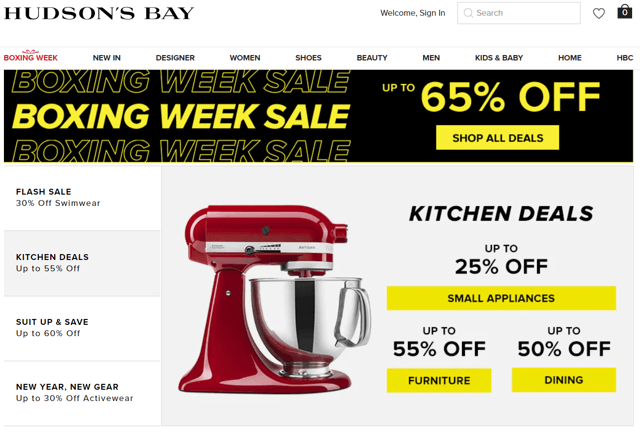 As shown in the image below, the company's key initiatives include connecting with customers and increasing its productivity. However, what we could learn from the annual report is that the acquisition of other businesses is very relevant for HBC. The amount of transactions executed in the most recent history is impressive. 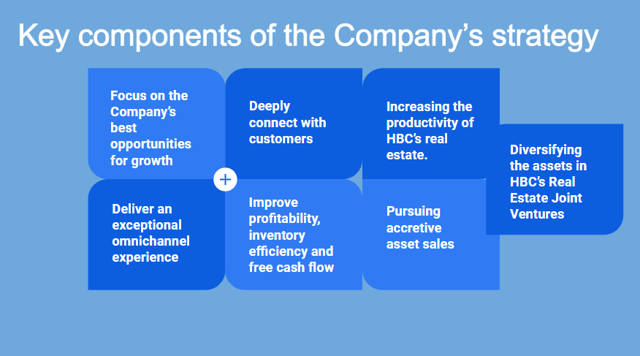 See the image below and note that the company is acquiring businesses in the retail sector as well as closing or selling stores:

With regards to the real estate business, the company is selling its equity interest and assets. As noted above, the company is trying to diversify its assets in the different joint venture agreements signed. See the table below for more details on the matter:

In our view, the years 2019 and 2018 were very relevant for HBC. The change of the CEO in 2018 is very meaningful. HBC hired a new CEO, Helena Foulkes, who worked at Goldman Sachs (GS) and was appointed to create a financially stronger company. The new CEO was responsible for the sale and closure of non-performing stores and assets. In our view, with this CEO, many financial buyers will be interested in assessing the company's future projections.

In 2019, Sale Of Properties Pushed Operating Income Up

The sale of property and sale of European investments really matter here. They are worth CAD 1037 million and resulted in the operating income increasing to CAD 556 million. If we subtract CAD 1037 from the operating income, the figure is much worse than that in the same period in 2018. Investors should understand that the sale of properties is an extraordinary event. HBC is making a lot of effort, but it is not a profitable company. 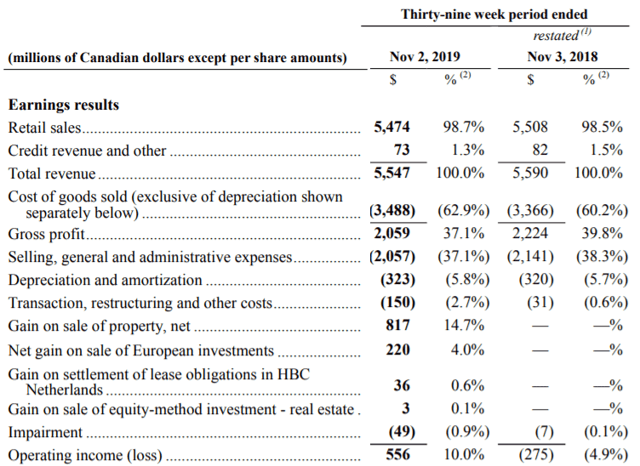 The loss from investment in the EDS Group was valued at CAD -282 million. As a result, the net loss for the nine weeks period ended November 2, 2019, was equal to 935 million. See the image below for more details on the company's bottom line: 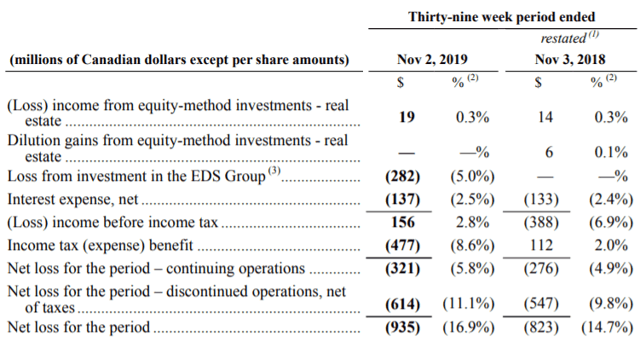 Having said so about the numbers reported in 2019, the market is very positive about the company's EBITDA margin. Market participants expect EBITDA margin to increase from 3.6% in 2019 to 6.07% in 2021. Notice that investors are expecting the company to see a decline in its sales as it sells and closes stores. Sales are expected to stabilize at $8 billion:

Due to the holiday shopping season, HBC's Q4 sales represent a significant portion of the company's total sales. Approximately one-third of HBC's sales are due to Christmas and holiday shopping season. In the light of this fact, with $5.547 billion in Q1, Q2 and Q3, we would expect 2019 sales to be equal to $8.3 billion.

With regards to the sales percentage change, notice that the sales attributed to Hudson's Bay were lower than that in 2018. Besides, in 2019, the number of stores declined: 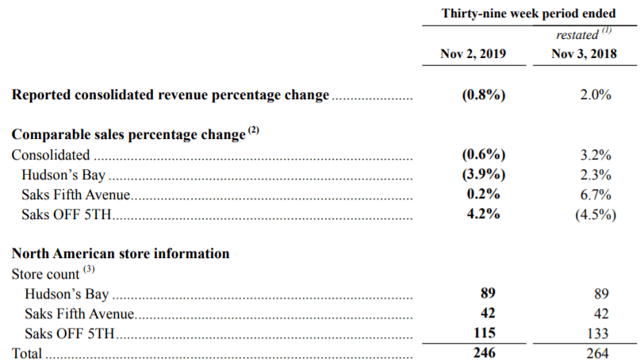 Total Amount Of Leverage May Be Depressing The Share Price

Most investors claim that the company is receiving low bids. While we agree, market participants need to understand that the company's total amount of debt is considerable. The entity, which finally acquires HBC, will have to assume the company's financial obligations. It may have to provide equity financing. Notice that on November 2, 2019, cash on hand was equal to CAD 1.094 billion, inventories were worth CAD 2.5 billion, and PP&E was valued at CAD 3.37 billion. However, loans and borrowings were equal to CAD 2.78 billion. If we add finance lease obligations of CAD 0.3 billion, the company's financial obligations are larger than CAD 3 billion. See the images below for more details on the matter:

The market expects 2020 EBITDA of CAD 406 million, which means that the company's debt is 7.7x 2020 EBITDA. It does seem that significant. Note that Standard & Poor's Global Ratings gave the company a credit rating of B3. It is not a speculative rating, but is not far from being speculative:

Equity holders should understand that the company's net income is negative, and the market expects it to be negative in the next three years. Besides, the FCF is also not positive. With this in mind, those buying shares will need to understand clearly that HBC could take many years to deliver positive net income.

Valuation: Look At The Properties

Taking into consideration a weighted average shares outstanding of 184 million at CAD 9.88, the market capitalization equals CAD 1.817 billion. With debt of CAD 3 billion and cash of CAD 1.09 billion, the enterprise value is equal to $3.7 billion. If we use 2020 EBITDA of CAD 406 million, HBC is trading at 9.1x 2020 EBITDA, which we don't believe is that expensive if we consider the company's PP&E.

The company's properties really matter on this name. In November 2019, the company's property and equipment were worth CAD 3.37 billion. With a share count of 184 million shares, the PP&E per share is equal to CAD 18 (excluding debt and leases). As we saw above, in 2019, the company sold certain properties and obtained an impressive amount of cash. It means that the fair value of the assets in the balance sheet may be larger than that in the balance sheet.

The company signed an agreement with a list of shareholders who collectively own approximately 57% of the common shares on an as-converted basis. They offered to buy the company for CAD 10.30 per share in cash:

"On October 20, 2019, HBC entered into a definitive agreement for the privatization of the Company with an entity controlled by a group of HBC shareholders, including individuals and entities related to, or affiliated with, Richard A. Baker, Governor and Executive Chairman of HBC; Rhône Capital L.L.C.; WeWork Property Advisors; Hanover Investments (Luxembourg) S.A.; and Abrams Capital Management, L.P. Under the terms of the Arrangement Agreement, the Common Shares not held by the Shareholder Group (who collectively own approximately 57% of the Common Shares on an as-converted basis), will be purchased for cancellation at a price of $10.30 per share in cash." Source: Q3 2019

In our experience, when a controlling group of shareholders decides to buy the company, many times the Board of Directors do not contact many interested potential acquirers. In fact, Glass Lewis, which recommended shareholders to accept the offer, agreed that HBC has not executed a market check:

"We recognize that the Company did not run a competitive pre-signing sale process here, which may raise questions among investors as to whether the Company was truly able to extract the highest possible value available to shareholders. In general, we believe that shareholders of a target firm are best served by a competitive process that is designed to invite or solicit expressions of interest from any likely suitor. Here, it appears to us that the Continuing Shareholders were never asked to compete for this deal." Source: Glass Lewis

Catalyst offered CAD 11 per share for the company and is also acquiring new shares below CAD 10 per share. Besides, an event-driven fund filed a lawsuit against the company. In the light of this new bid, many in the market are most likely thinking that the company may be worth much more than CAD 10.3 per share:

Besides, the Board of Directors rejected the CAD 11 per share offer because Catalyst does not have enough support. Keep in mind that the group of shareholders offering CAD 10.3 per share would not vote for the other offer:

There are two reasons to believe that the company will be bought at a minimum of CAD 11 per share. Firstly, Catalyst is a real estate firm and is not a retail business. In our view, other competitors of HBC could obtain synergies if they acquire the company. As a result, they may be able to offer a larger acquisition consideration than Catalyst. We believe that HBC has not contacted other potential buyers. If it commences to contact them, or a financial advisor does so, HBC may get an offer of more than CAD 11 per share. This scenario is, in our opinion, not that likely.

With two offers at CAD 10.30 per share and CAD 11 per share, we don't see a lot of risks. Note that if one shareholder withdraws its offer, we will have the offer from the other acquirer. Besides, the share price is trading below the lowest offer of CAD 10.3 per share.

There does not seem to exist a financial condition for the merger to go through, but, of course, there are several acquisition conditions. The shareholders will need to vote, and the antitrust authorities in the USA and Canada will need to approve the transaction. However, we don't think waiting for the close of the deal makes sense. In our view, if one of the bidders withdraws its offer, we would sell our position.

With valuable assets, HBC is an interesting target for real estate firms and retail operators. Besides, with two bidders, the shares could easily jump up to more than CAD 11 per share if they find a mutual agreement. In any case, we believe that HBC represents a magnificent buying opportunity at the current share price.

Saint Fleur Investment Research
146 Followers
Investment Professional. I provide short selling ideas. I have worked in the indsutry for the las 10 years
Follow