Escalating tension between the US and Iran has seen ICE Brent rallying more than 4%, following a US airstrike which killed a key Iranian commander in Baghdad.

Any significant disruption in the Middle East could tighten the global balance sheet fairly quickly.

In USD interest rates, pricing a more hawkish Federal Reserve on the back of the jump in oil prices is a bridge markets will not cross easily.

Crude oil has spiked 4% on news that a US airstrike has killed a key Iranian commander in Baghdad. We take a look at possible paths for Iranian retaliation and their impact on oil prices and global financial markets.

Escalating tension between the US and Iran has seen ICE Brent rallying more than 4%, following a US airstrike which killed a key Iranian commander in Baghdad. The strength we have seen in the oil market is more a reflection of the uncertainty about what happens next between Iran and the US, rather than a change in oil fundamentals. Iran's supreme leader has vowed "severe retaliation" for the attack, and until it becomes clearer how the Iranians will respond, the oil market is likely to continue pricing in some form of risk premium.

What form could Iranian retaliation take?

Any significant disruption in the Middle East could tighten the global balance sheet fairly quickly, and it wouldn't take too much to eat into the 900Mbbls/d surplus that we currently forecast over the first half of 2020. However, saying that, if the Iranians attempted to block oil shipments through the Strait of Hormuz, the Saudis could increase oil flows through their East-West pipeline, and ship from the Red Sea instead. Aramco was in fact set to complete expansion work on the pipeline last year, which would take capacity from 5 to 7MMbbls/d. Saudi crude oil exports were estimated at 6.73MMbbls/d in December, with 88% of this going through the Strait of Hormuz, suggesting there is plenty of capacity to shift flows through the pipeline.

Any significant and sustained disruption would likely mean the end of the OPEC+ deal to cut production by 1.7MMbbls/d, with members wanting to ensure adequate supply for the market. There is also the potential for emergency releases from government stocks. President Trump would want to avoid higher oil prices, particularly in an election year, and so we could see releases from the US Strategic Petroleum Reserves, which currently stands at around 635MMbbls.

The oil market over the last year has been fairly good at shrugging off large oil disruptions, and growing tensions in the Middle East. This attitude does appear to be partly a result of the comfortable supply and demand balance for the global oil market, and this is a trend that is unlikely to change at least over the first half of 2020, due to the surplus environment.

Until there is clarity on how the Iranians may retaliate to the US airstrike, we continue to believe from a supply and demand point of view that ICE Brent should trend back towards US$60/bbl over the course of this quarter. 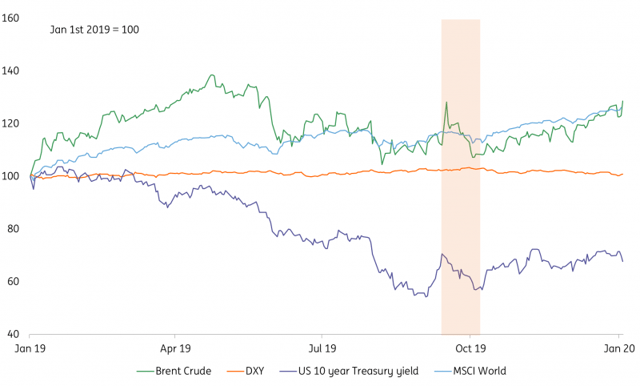 The spike so far in crude oil prices has been relatively muted compared to the 15% jump when Saudi Aramco facilities were attacked last September. Crude unwound all those gains within a two-week period and the move had little lasting impact on global FX and bond markets - financial assets were instead dominated by US-China trade discussions.

As above, the focus is now on the potential severity of Iranian retaliation, and were that retaliation to trigger a prolonged spike in crude sufficient enough to put a big dent in global growth. It would seem unlikely, but a $90-100/barrel scenario would probably require serious questions being asked of Iraq's oil production capabilities - where Iraq is now OPEC's second largest producer at 4.5mn bpd, compared to Iran's current output of 2.1mn bpd. We looked at some of those market implications in our 16 September article: 'What events in Saudi Arabia mean for markets'.

What we would add to those comments is that, since September, risk assets have been on a tear. The MSCI World equity index (MXWO) has rallied 12% since early October. And the big rally in risk assets in December certainly looked like a play on the 2020 story - benign conditions, a trade truce and more money printing in G3 economies. Were events in the Middle East to escalate severely, overweight positioning in risk assets could easily trigger a 7-10% correction in global equity markets.

Beyond the points we made in our September article regarding the FX market's reaction to an oil-shock story, we would now largely focus on the fallout in equity markets. As outlined in the chart below, currencies continue to show familiar correlations with the MXWO, and were an equity correction to materialise, the Japanese yen should once again outperform - especially against those risk-sensitive currencies directly exposed to oil exports via the Straits of Hormuz, i.e. the Korean won and the Indian rupee.

Notably, EUR/USD has shown very little correlation with world equities over recent months and, on balance, we would favour higher USD yields and US near energy independence keeping EUR/USD gently offered. 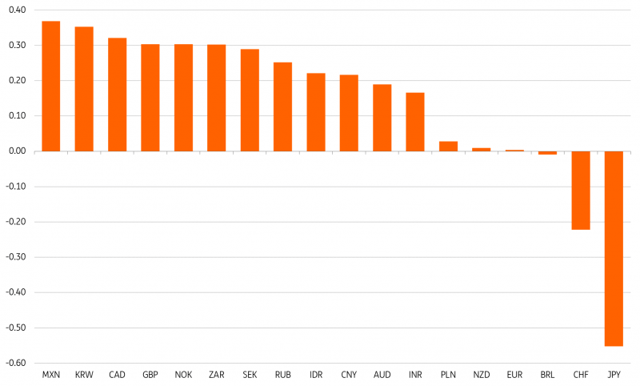 In USD interest rates, pricing a more hawkish Federal Reserve on the back of the jump in oil prices is a bridge markets will not cross easily. Admittedly, the pass-through of oil prices to domestic headline inflation is greater in the US than in other developed economies. However, the Fed has recently expressed concerns about muted inflation pressures. The threat of a contagion from the weakness of the manufacturing sector to other corners of the economy is a more pressing concern in investors' minds, in our view.

With a more dovish Fed than expected, still cloudy economic outlook, and heading into an election year, we see little upside to front-end rates. This leaves longer yields to react to economic and geopolitical developments. As optimism surrounding the US-China trade deal is largely priced in, we see less resistance to a move lower, and flatter, in rates. Another scenario where the US curve bull-flattening move continues is if the much hoped for economic recovery fails to materialise. Indeed, our US economist sees downside risk to 2020 growth.

It is possible that persistently high oil prices resonate more with EUR rates markets. This may seem surprising, given persistently low core inflation, but as we have discussed earlier, the communication vacuum at the ECB is prompting a re-assessment of its reaction function. Ultimately, we doubt expectations of policy tightening this, or next, year will prove correct. Higher oil prices and any impact on headline inflation would add to a series of factors that is pushing the hawkish re-pricing in EUR rates. 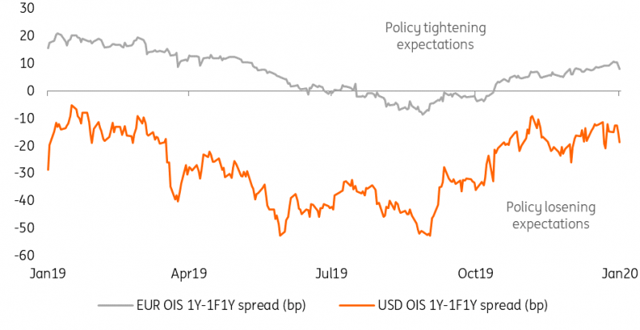 Within the credit market, the more cyclical sectors are likely to be those more affected by escalating tensions in the Middle East. Although there have not been any major spread developments thus far, the Autos and Consumer discretionary sectors would be more vulnerable. Of course, any further weakness in equities would start to see the synthetic credit indices come under pressure. Currently, the cash spreads are outperforming the iTraxx main. Flows are still two-way in the belly and long-end of the curve in cyclical names.

If tensions were to escalate further, we stand by our sector scoring calls from our Credit Outlook 2020, where we are underweight cyclical sectors, such as Autos and Travel & Leisure and are overweight on more defensive sectors, including Utilities, Telecoms and Food & Beverage. For the energy sector itself, in 2019, the iBoxx IG € Energy index (mostly comprised of oil & gas companies) underperformed the iBoxx overall IG index. A substantial increase in oil prices for an extended period of time would benefit oil & gas companies' financials overall. Against all odds, this sector could present a bullish picture for 2020.

Following a strong December for emerging market sovereign bonds (+1.5% for Bloomberg Barclays EM USD Aggregate index), the recent events dampen the mood for sentiment. For now, investors remain in wait-and-see mode, but the threat of a "severe retaliation" by Iran will keep investors alert and imply further downside in case of a step up in tensions.

The focus remains on the MENA region which already has seen a tumultuous 2019 (notably driven by the Yemen conflict and protests in Iraq and Lebanon). While IRAQ bonds have dropped by US$1.5-2.0, the spread reaction for other sovereigns has been muted with Saudi Arabia's 5-yr CDS spreads having increased by 5 basis points since yesterday. However, more prolonged tensions that raise the threat of military action would undeniably pose a larger risk for the region. In such a scenario, geopolitical risks and negative market sentiment outweigh the benefits of a higher oil price, as was the case following the attacks on Saudi oil facilities in September 2019 (when Saudi Arabia CDS spreads widened by 15bp).

It is also noteworthy that the MENA region has increased its relevance in EM fund managers' portfolios due to increased primary bond supply and GCC inclusion in the J.P. Morgan EMBI Global bond indices. Based on EPFR Global, the share of MENA countries across EM funds has increased from below 4% five years ago to c.13% in end-2019.

Follow ING Economic and Financial Analysis and get email alerts
+
Add a comment
Disagree with this article? Submit your own.
To report a factual error in this article, click here.
Your feedback matters to us!