Let’s address an elephant in the room: the rapidly expanding federal debt. Each annual deficit raises the total debt and forces the Treasury to issue more debt, in hopes someone will buy it.

The US government ran a $343 billion deficit in the first two months of fiscal 2020 (October and November), and the 12-month budget deficit again surpassed $1 trillion. Federal spending rose 7% from a year earlier while tax receipts grew only 3%.

No problem, some say, we owe it to ourselves, and anyway people will always buy Uncle Sam’s debt. That is unfortunately not true.

Foreign Treasury Buyers Are Turning Away

The foreign buyers on whom we have long depended are turning away, as Peter Boockvar noted:

Foreign selling of US notes and bonds continued in October by a net $16.7b. This brings the year-to-date selling to $99b with much driven by liquidations from the Chinese and Japanese. It was back in 2011 and 2012 when in each year foreigners bought over $400b worth. Thus, it is domestically where we are now financing our ever-increasing budget deficits.

The Fed now has also become a big part of the monetization process via its purchases of T-bills which also drives banks into buying notes. The Fed's balance sheet is now $335b higher than it was in September at $4.095 trillion. Again, however the Fed wants to define what it's doing, market participants view this as QE4 with all the asset price inflation that comes along with QE programs.

It will be real interesting to see what happens in 2020 to the repo market when the Fed tries to end its injections and how markets respond when its balance sheet stops increasing in size. It's so easy to get involved and so difficult to leave.

Declining foreign purchases are, in part, a consequence of the trade war.

The dollars China and Japan use to buy our T-bills are the same dollars we pay them for our imported goods. But interest and exchange rates also matter. With rates negative or lower than ours in most of the developed world, the US had been the best parking place.

But in the last year, other central banks started looking for a NIRP exit. Higher rate expectations elsewhere combined with stable or falling US rates give foreign buyers—who must also pay for currency hedges—less incentive to buy US debt.

If you live in a foreign country and have a particular need for its local currency, an extra 1% in yield isn’t worth the risk of losing even more in the exchange rate.

I know some think China or other countries are opting out of the US Treasury market for political reasons, but it’s simply business. The math just doesn’t work.

Especially when President Trump is explicitly saying he wants the dollar to weaken and interest rates go even lower.

If you are in country X, why would you do that trade? You might if you’re in a country like Argentina or Venezuela where the currency is toast anyway. But Europe? Japan? China? The rest of the developed world? It’s a coin toss.

It sure looks like, through QE4 and other activities, the Fed is taking the first steps toward monetizing our debt. If so, many more steps are ahead because the debt is only going to get worse.

As you can see from the chart below, the Fed is well on its way to reversing that 2018 “quantitative tightening.” 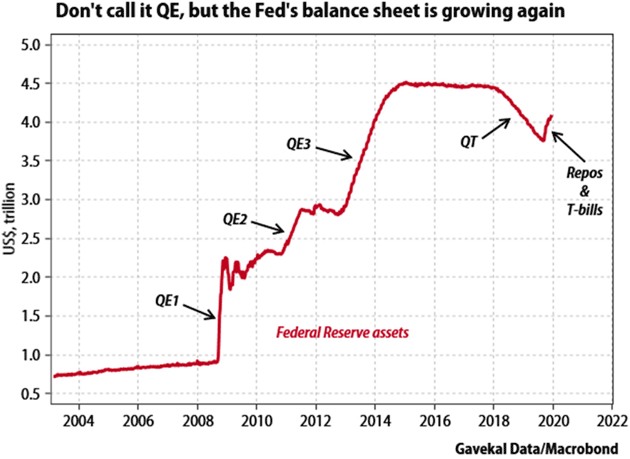 Luke Gromen of Forest for the Trees is one of my favorite macro thinkers. He thinks the monetization plan will get more obvious in early 2020.

Those that believe that the Fed will begin undoing what it has done since September after the year-end “turn” are either going to be proven right or they are going to be proven wrong in Q1 2020. We strongly believe they will be proven wrong. If/when they are, the FFTT view that the Fed is “committed” to financing US deficits with its balance sheet may go from a fringe view to the mainstream.

Both parties in Congress are committed to more spending. No matter who is in the White House, they will encourage the Federal Reserve to engage in more quantitative easing so the deficit spending can continue and even grow.

The next recession, whenever it happens, will bring a $2 trillion+ deficit, meaning a $40+ trillion-dollar national debt by the end of the decade, at least $20 trillion of which will be on the Fed’s balance sheet. (My side bet is that in 2030 we will look back and see that I was an optimist.)

Sometime in the middle to late 2020s, we will see a Great Reset that profoundly changes everything you know about money and investing. A crisis isn’t simply coming. We are already in the early stages of it.

I think we will look back at late 2019 as the beginning. This period will be rough but survivable if we prepare now. In fact, it will bring lots of exciting opportunities.

John Mauldin
12.52K Followers
I am a financial writer, publisher, and New York Times bestselling-author. Each week, nearly a million readers around the world receive my Thoughts From the Frontline free investment newsletter. My most recent book is Code Red: How to Protect Your Savings from the Coming Crisis. I appear regularly on CNBC and Bloomberg TV. I’m also Chairman of Mauldin Economics, a research group that provides monthly analysis and recommendations to thousands of readers around the world. I was previously CEO of the American Bureau of Economic Research. Today I am President of the investment advisory firm Millennium Wave Advisors, LLC. I am also president and registered principal of Millennium Wave Securities, LLC a FINRA and SIPC registered broker dealer. When I’m not traveling to speak at conferences and events, I live in Dallas, TX. I’m also the proud father of seven children.
Follow