My allocation remains the same for January.

My 12 month performance is analyzed.

This month’s article will outline why I will maintain a 100% allocation to SPY with my retirement assets in the New Year. There will be no changes to my retirement allocations in January as we are in the seasonally bullish period for stocks. First let me review my performance in December. The market, as measured by the S&P 500 index, gained 2.86%. As for my pension plan assets, I was also positive with a return of 3.62% matching the SPY ETF. Consequently my investment objective of preserving my capital was met. Table 1 below shows my returns and allocations for the month of December and Table 2 below shows my returns for the past 12 months. As for my returns for the year, I am pleased that I gained over 16% for the year. I am disappointed that I underperformed the SPY by almost 12%. The main reason for my underperformance was the market whipsaw in late 2018 and early 2019 that caused me to move money to cash or AGG early in 2019 while the SPY gained over 10%. The good news is that I followed my trading rules. I just don’t like the vast underperformance. I will continue to follow my system rules as I try to learn from the experience and maybe I can identify a way to improve or mitigate some aspect of the whipsaw. 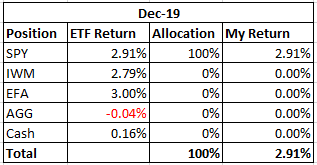 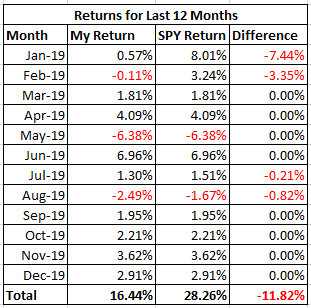 To review the purpose of this series of articles, my retirement account only allows me to buy the following four ETFs: iShares Core U.S. Aggregate Bond ETF (AGG), SPDR S&P 500 ETF (SPY), iShares Russell 2000 ETF (IWM), and iShares MSCI EAFE ETF (EFA). I can also have my money in cash. The question is how to decide where and when to allocate money to these various ETFs.

You can see that the moving average crossover system provided some excellent long term buy and sell signals that would have allowed investors to capture long duration moves in the index; while avoiding costly drawdowns. Avoiding these costly drawdowns allows me to meet the objective of capital preservation.

I employ this strategy because I do not want to experience a large drawdown with my pension assets. During the 2008 - 2009 market crash many people didn't even look at their retirement statements because they were afraid of what they would find. I submit that if those people would have used a market strategy similar to what I outline in this series of articles, they would have been able to avoid much of the decline during the bear market and consequently would have had less emotional stress during that time period.

The following charts show the current status of the ETFs that I am allowed to buy in my retirement account.

SPY gained 2.91% in December and again closed at a new high. It remains in bullish alignment and the whitespace between the two moving averages increased for the month. Volume remained muted in December. As I stated last month, I like the fact that SPY is at all-time highs and is in bullish alignment. I will keep 100% of my retirement funds allocated to SPY for January as we continue to be in the seasonally bullish period for stocks.

IWM had a good month by gaining 2.79% in December. Nothing has changed from last month’s analysis. IWM is in bullish alignment and it is heading for new highs. IWM will be a position to watch now that we are in the seasonally bullish period of the year.

Chart 4 shows the relative strength of IWM compared to SPY. IWM underperformed SPY by 0.12% in December. The ratio is trying to enter the downward sloping channel that I have been monitoring for a couple of years. One thing to watch is for the ratio to close above the red 10 month moving average line. That could be a signal to allocate some money to IWM. Until then there will be no money allocated to IWM.

EFA had a great December. EFA closed 3.00% higher for the month and was the best performing ETF that I follow. It is on the verge of setting a new high. EFA remains in bullish alignment as its two moving averages continue to move higher. I will continue to monitor this ETF.

Chart 6 shows that EFA barely outperformed SPY in December by 0.09%. Chart 6 shows the long term weakness that EFA has had compared to the SP500 index. Domestic equities have been stronger than international equities. At some time, that trend will reverse. Something I will be looking for is when the ratio can rise above the red 10 month moving average. That may be a time to allocate some money to EFA. As for now no money will be allocated to EFA.

Chart 7 shows that EFA outperformed IWM by a small margin of 0.20% in December. The EFA:IWM ratio remains inside the green box and hasn’t made much progress all year. I would like to see the ratio break above the December 2018 high. If it does that, it is a good first step to reversing EFA’s bearish trend compared to IWM. I will continue to monitor this ratio.

Not much has changed with AGG since last month. In December, AGG lost 0.04%. The consolidation in AGG’s share price that was mentioned last month continues. AGG remains in bullish alignment.

Chart 9 shows that AGG continues to underperform SPY. In December, AGG lagged SPY by 2.87%. Nothing has changed from my previous analysis of this ratio. The ratio hasn’t moved much in the past year and a half. That is why I haven’t allocated money to AGG. If this ratio goes above the December 2018 high then perhaps bonds will outperform stocks for the long run. Until that time I prefer stocks to bonds.

In summary, equity markets went higher and bonds declined slightly. This time EFA was the star performer but is still in a long term downtrend versus SPY. IWM was higher and lagged EFA and SPY. All four ETFs that I monitor for my retirement assets are in bullish alignment. As for my retirement assets, I had a good month, with my position climbing 2.91% in December. I was 100% allocated to SPY in December and I will remain with that allocation as we start the New Year. Happy New Year to all.

Follow Walter Zelezniak Jr and get email alerts
+
Add a comment
Disagree with this article? Submit your own.
To report a factual error in this article, click here.
Your feedback matters to us!