The U.S. dollar index peaked the end of September, 2019 and steadily lost ground the last 3 months of the year.

Sentiment suggests a true reversal has started, with the greenback to strengthen for the next while.

A future shift in sentiment can help estimate how high the U.S. dollar index will go before the greenback starts to weaken again.

Though it followed U.S. equities higher through most of 2019, the U.S. dollar made an abrupt turn at the end of September and retreated for the rest of the calendar year. That trend is likely reversing temporarily.

The S&P 500 had a shaky August and some early October jitters, but then carried on its merry way up. The U.S. dollar index, on the other hand, had given up pretty much all of its 2019 gains as of this writing, after peaking around 99.5. 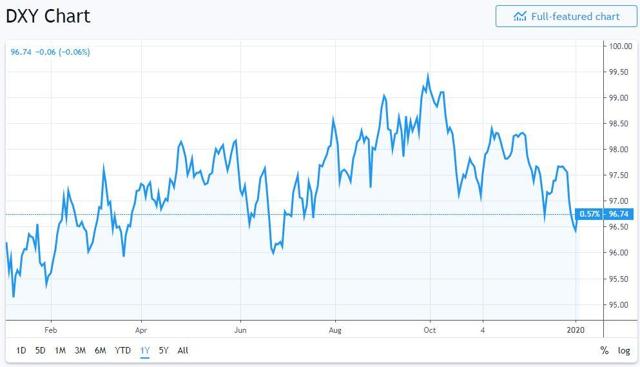 Based on sentiment though, we should see a significant strengthening of the U.S. dollar before further weakness. The Daily Sentiment Index is one of the more reliable contrarian sentiment indicators when at extremes. And extremes we have had.

Positive sentiment around the greenback dropped below 10% of traders the last week of December, and has just crossed back above that line as the U.S. dollar has woken up a little.

Complementary to this, and strengthening the case, the euro, the Swiss franc, the Canadian dollar, and the Australian dollar, all reached high levels of enthusiasm the same week, with greater than 90% of traders bullish on these currencies.

Here are the most recent Canadian dollar numbers:

And the latest Swiss franc sentiment:

There is similar evidence from other forex sentiment indicators.

The IG Client Sentiment Index shows traders short the same currencies against the U.S. dollar. This would seem contradictory and confusing, but the IG index is actually, and unexpectedly, a smart money indicator, rather than a dumb money one like the Daily Sentiment Index.

It is not truly contrarian, despite the fact that the creators of the index themselves view it that way. The index is instead more useful when treated as smart money.

For example, there is currently a rarely seen near-consensus among the IG clients that the Swiss franc will weaken against the U.S. dollar, as it has just started to do. 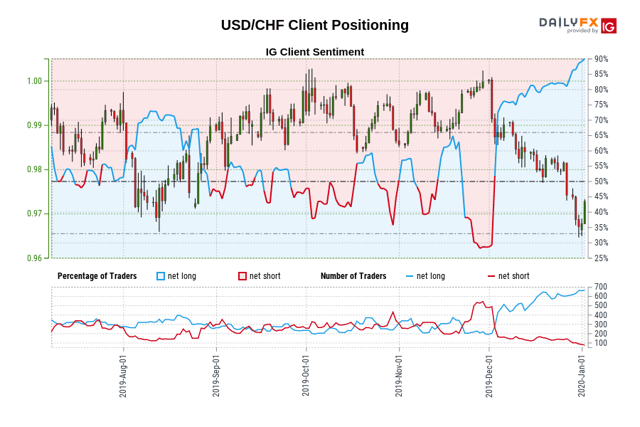 This is how their analysts describe the above chart: "We typically take a contrarian view to crowd sentiment, and the fact traders are net-long suggests USD/CHF prices may continue to fall."

But you'll note that the opposite is mostly true. As the Swiss franc fluctuates up and down, the index is usually net short at tops and net long at bottoms, indicating these are traders who tend to get in at the right time, not the wrong time. This is the positioning we all want.

The IG index and Daily Sentiment Index can be used as a guide for when to go long or short a specific currency pair, where the tops and bottoms might be. How low or high the sentiment index must go to pick a turning point varies however, which is what brings unpredictability.

You can see with the IG index, that the last time the Swiss franc was priced as low against the dollar as it was at the end of December, positive sentiment only hovered between 70 and 75 per cent. And still the franc bottomed and made a bouncy, but consistently upward move that lasted more than a month and a half, by which time traders were over 60% net short.

As with the Daily Sentiment Index, the more extreme the sentiment, the more reliable it is. Unfortunately though, no measure is completely reliable; even at extremes some uncertainty remains. The smart money sometimes turns out to be way early, and therefore basically wrong.

Nevertheless, sentiment is speaking extra-loudly right now. And other proprietary smart and dumb money indicators confirm the same views, with smart money traders expecting the U.S. dollar to go up for now, and the dumb money mostly calling for the opposite.

If this move does continue as expected, it will of course be impossible to predict in advance how far it will go. Will it fizzle in a few weeks, create a double top, or will it lead to higher highs, postponing any true downtrend for the greenback?

How rapidly sentiment reverses can give some indication, but again is never fully reliable. Easing into positions as sentiment gets more extreme is how I manage this uncertainty, along with a willingness to give up some less certain money-making opportunities in order to have a better win rate. I then close out more rapidly than I opened as that is decreasing risk rather than taking more on.

I had slowly positioned myself bullishly on the U.S. dollar as the year came to an end, and will now be monitoring sentiment changes to estimate the best time to close, assuming the U.S. dollar continues to firm up. When that time will arrive can't be predicted in advance - only recognized when it has.

Disclosure: I am/we are long UUP. I wrote this article myself, and it expresses my own opinions. I am not receiving compensation for it (other than from Seeking Alpha). I have no business relationship with any company whose stock is mentioned in this article.

Additional disclosure: This article is for information and entertainment only, and not advice to buy or sell anything. Investing comes with a substantial risk of loss. Please be cautious and conduct your own research before putting your capital at risk

Follow Sentimental Trader and get email alerts
+
Add a comment
Disagree with this article? Submit your own.
To report a factual error in this article, click here.
Your feedback matters to us!