The assumption is that this is the final effect of Brexit uncertainty plus unwinding of Brexit-related overstocks.

A rebound to growth is expected in the immediate future.

We know that Brexit will at times depress output. Simply because we've seen it happen at least twice so far - not Brexit, but the moment when Brexit was to be and the reaction of production to that. We also know that uncertainty depresses new investment and thus the production of investment goods.

Given that Brexit is just about to happen - again - we can thus predict that there's going to be a drop in manufacturing just before it does. And that's what we are seeing so bully for economic prediction.

Of course, it's always possible that this is a secular decline, that this isn't simply related to this transient cause. But that's not the way to bet and isn't the way we should interpret these figures. This is the nadir before the revival, not a harbinger of a more general recession.

Don't forget that before that first exit date, in March 2019, we saw a boost to the economy a couple of months before, as stocks were built up against the possible supply line disruptions. Then GDP growth was depressed as those stocks were run down. We saw the same again in the figures for the second, autumn (fall) date. We're not surprised that the election led to a suppression of growth, given uncertainty. And now we're in this last few weeks before the U.K. actually leaves.

Given the way the production calendar works any overstock will have been built up before Christmas, before the election in fact. So, now the uncertainty of the election is over and we're on the run into Brexit itself, we can imagine we get that unwinding again.

Do note that this time around Brexit itself isn't going to cause any disruption to supply lines - there is a standstill agreement that the terms of trade won't change over the next year at least.

We have the numbers for that U.K. manufacturing PMI:

The headline seasonally adjusted IHS Markit/CIPS Purchasing Managers’ Index® (PMI®) fell to 47.5 in December, the secondweakest level for almost seven-and-a-half years (the PMI stood at 47.4 in August 2019). The PMI has posted below the neutral mark of 50.0 in each of the past eight months. Data were collected between the 5-18 December.

Note the dates there. That's right over the period of the election.

The declines seen in investment goods were especially marked and the sharpest in over a decade. In contrast, consumer goods producers saw improved intakes of new business from domestic and overseas markets.

As above, uncertainty is going to have a greater effect upon investment goods than consumers.

Business sentiment remained positive in December. Over 43% of companies forecast output would be higher one year from now, compared to only 10% anticipating a contraction. Optimism was linked to reduced uncertainty, new product launches, increased efficiency and improved client confidence.

Business itself certainly thinks this is a transient issue, one that it is confident will pass. 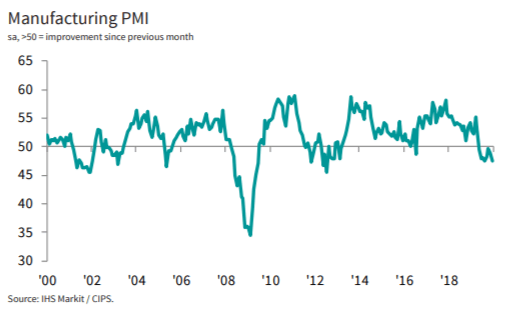 It's all Brexit and election-related

As I've pointed out before, this Brexit and election-related uncertainty is what has been ailing the British economy recently.

Given that headwind, the economy has actually been doing rather well. Removing the uncertainty, we can expect performance to improve.

This isn't quite how this news is being read in the press:

British factory output fell in December at the fastest rate since 2012 as a tepid global economy hurt demand and businesses further reduced stocks of goods they had built up in case of a no-deal Brexit, a survey showed on Thursday.

This isn't about the global economy at all. It's a purely local and transient issue. Which is what provides an opportunity of course, if we're better informed than other market participants then we can profit.

As I've been saying here I am of the view that the uncertainty is the thing which has been afflicting the British economy these past months - actually, couple of years. Even given that we've an economy with record lows of unemployment, high employment to population rates and rising real wages. Remove the uncertainty and I only expect the economy to grow strongly.

This PMI was compiled just as that uncertainty was at its greatest, the weeks directly around the election. That's over, the precautionary stocks are unwinding and the Brexit issue is solved. Growth should be strong in the immediate future.

It's all too easy to read these statistics as showing that things are gloomy for the U.K. economy. But that's really not the right way to read them at all. This is the nadir, the bottom of the cycle. Now that the uncertainty has been removed, expect a significant uptick in the U.K. economic growth. U.K. stocks are looking like a good buy.

Follow Tim Worstall and get email alerts
+
Add a comment
Disagree with this article? Submit your own.
To report a factual error in this article, click here.
Your feedback matters to us!