Just days into the new decade, a significant escalation in Middle East took place when U.S. assassinated Iranian General Qassem Soleimani with a drone strike, a decision that "for all practical purposes a 'declaration of war' with far-reaching implications for the region, especially Iraq." per Aljazeera. Retaliation is virtually assured from Iran, as the question is more about when and how. To wit from CNN:

Iranian President Hassan Rouhani said Saturday that the United States committed a "grave mistake" in killing Soleimani and that Americans "will face the consequences of this criminal act not only today, but also in the coming years."

In terms of market reaction, crude oil (USO) and gold (GLD) continued propelling to higher highs, while S&P 500 (SPY) futures plunged 1.5% before retracing some of the losses to end the week. The question is what lies ahead; and we attempt to get some clues based on what happened upon the onset of the last 3 major Middle East crisis (Gulf War, Iraq War and Arab Spring).

Not surprisingly, crude oil prices tend to receive a jolt whenever a major escalation flares up in the Middle East. In the 3 major crisis of Gulf War, Iraq War and Arab Spring, crude oil launched at least 20% within 100 trading days. That said, most of the gains were reversed within a year in all cases. 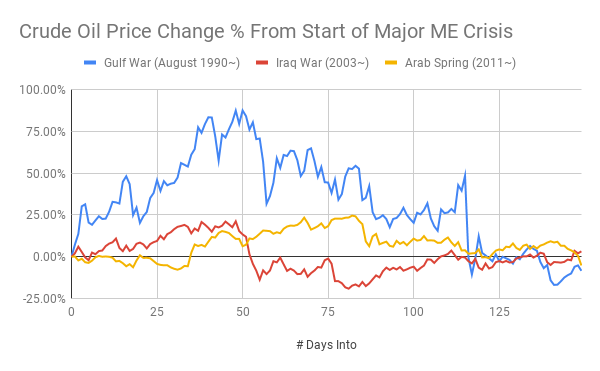 While not to the same extent as oil, safe haven gold also enjoyed gains up to 10% within 100 trading days during the onset of the 3 conflicts. In the case of Arab Spring, gold actually continued climbing higher even though oil prices receded due to a separate crisis (U.S. downgrade), as it eventually spiked into its all-time high by end of 2011. 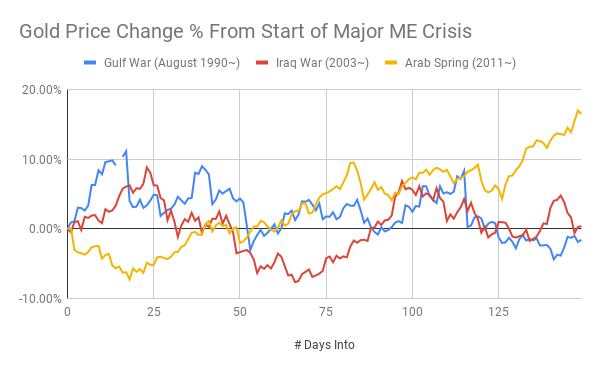 Opposite for U.S. Dollar

Another common theme is the broad weakness in U.S. dollar index (UUP), which proceeded to fall more than 5% during each of the 3 conflicts and partially explain the strength in commodities. 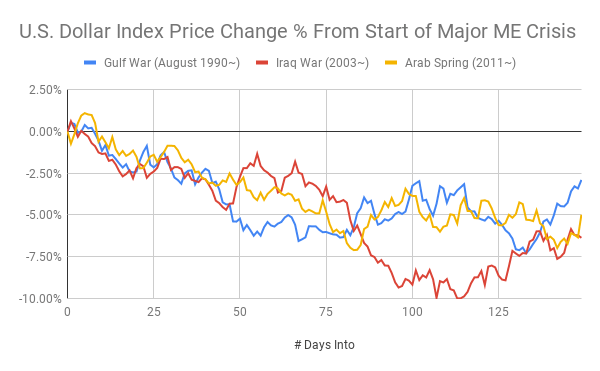 One reason for the lower U.S. dollar was a fragile U.S. economy leading to Fed's monetary easing policies during each of those 3 years. Specifically, the Fed began cutting rates in 1990 to combat a recession, while cutting for the last time in 2003 after aggressively doing so in the previous 2 years during the fallout of dot-com bubble and 9/11 attack. Meanwhile, QE2 was announced late 2010 prior to the start of Arab Spring crisis. 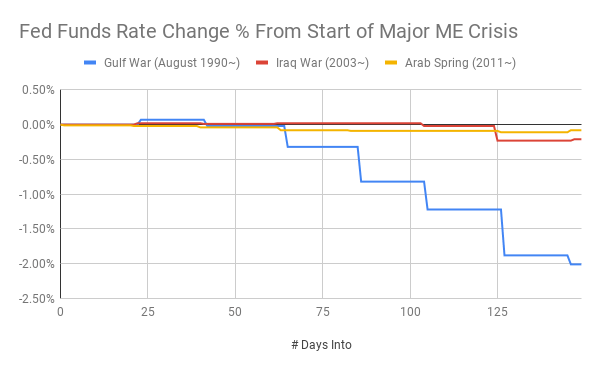 While U.S. stock market initially dropped during the Gulf War and Iraq War, the S&P 500 bottomed within 50 days to begin the next bull market. Meanwhile, stocks whipsawed in a 10% range during the escalations in Egypt and Libya, as S&P 500 was relatively unscathed until the U.S. credit rating debacle hit the fan. 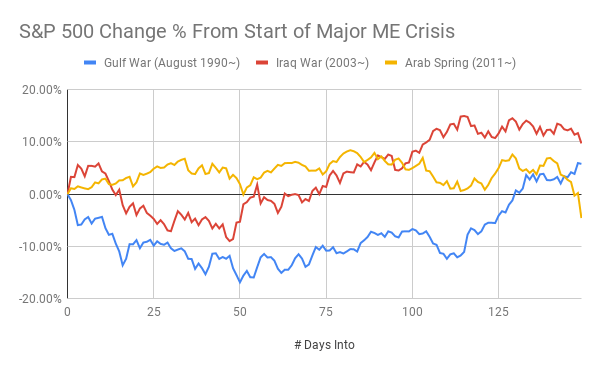 Likewise, spikes in VIX (VXX) up to 20-30% would not be out of the norm though will most likely be short-lived: 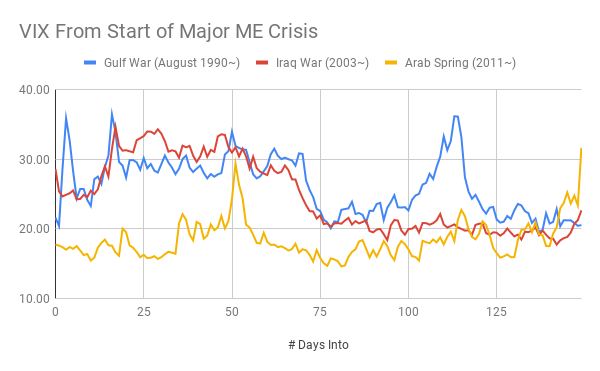 Key Differences Between Now & Then

While historical analysis offers insight into what potentially could transpire, we ought to take into account the differences between now and the last 3 decades. For instance, the U.S. economy today is in a much more robust state based on the simple fact that unemployment rate is at all-time lows of 3.5% comparing to much elevated levels during those 3 conflicts. Yet arguably the biggest difference of all is the secular decrease in U.S.' dependence on foreign oil. Specifically, since November 2019, U.S. became a net exporter in oil for the first time in decades according to EIA: 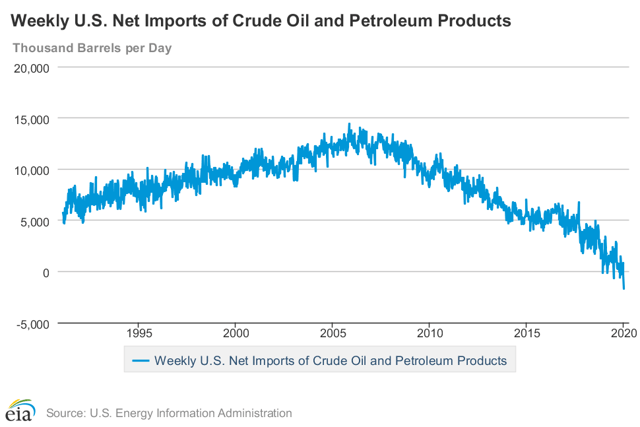 With the oil and natural gas industry having been the engine of economic growth the last few years, higher oil prices could contribute further to positive GDP growth. Per Energy Depth:

In 2018, the U.S. Bureau of Economic Analysis reported that oil and natural gas extraction alone contributed $218.8 billion to the U.S. economy.

Indeed, the impact of crude oil prices on the stock market has clearly been shifting to reflect this phenomenon, as the correlation between crude oil and S&P 500 turned persistently positive since 2010: 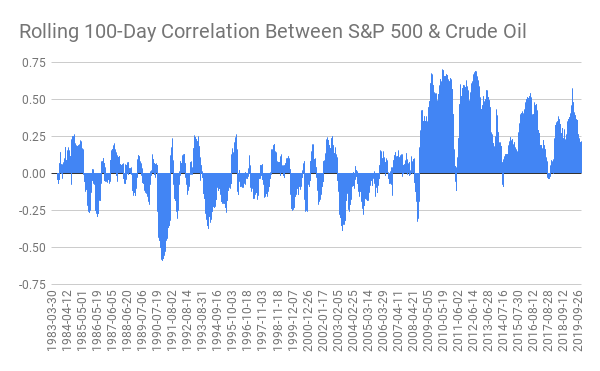 On the other hand, the conflict with Iran is considered to be "10-15 times worse" than the Iraq War according to U.K. Foreign Secretary Emily Thornberry, and hence comparisons versus those conflicts may not be as relevant. That being said, while an outright war with Iran is absolutely the worst-case scenario, it is extremely unlikely as "leaders in Tehran have a healthy respect for U.S. power and likely recognize they have little to gain from an all-out war," per analyst Henry Rome of the Eurasia Group on Yahoo Finance. He added:

Eurasia Group estimates a 28% likelihood of a short, limited conflict. It puts the odds of a broader war involving attacks on oil infrastructure at just 12%. Overall, that's a 40% chance of some kind of war.

Most likely heightened tensions will keep markets on their heels in the short-term but ultimately a black swan event would not be triggered in our opinion. As such, similar to the past conflicts, we expect oil and gold to be elevated in the short-term, while dips in stock markets are expected to be bought with the long-term outlook remaining bullish.