In mid-December, Cineplex (OTCPK:CPXGF) announced a friendly takeover deal that will see Cineworld Group (OTCPK:CNNWF or OTCPK:CNWGY ) purchase Cineplex for $34 (in CDN) a share. This represented a 42% premium at the time, but the stock had traded above $34 from mid-2013 to late 2017. To sell at a $34 price, quite a bit of value has been given up here.

In its most recent Q3 quarterly earnings update, Cineplex's management highlighted the following:

With the company enjoying such success, why sell a company now that was at one period trading at $50?

I can only think of a few reasons why:

Over the years, I have been bullish on Cineplex because of its attitude to wanting to try something new. In the last decade and a bit, Cineplex had made efforts to be more than just a movie theater company:

This diversification strategy has shifted its business where more than 20% of its total revenue now comprises of Media / Amusement / Other:

Cineplex's Diversification Results were Mixed, and This Punished the Stock Price

In all ventures, not every hit is a home run. Recently, Cineplex has disclosed in its latest earnings call that it is looking for a strategic equity partner for its online eSports business.

Profits in its media division have been low because of low installation revenues.

Revenue from its Rec Room restaurants is expected to come down because of the honeymoon period of 12 to 18 months.

Although revenue growth across all areas have improved over the prior year. It appears the Amusement division is seeing slowing sales momentum: 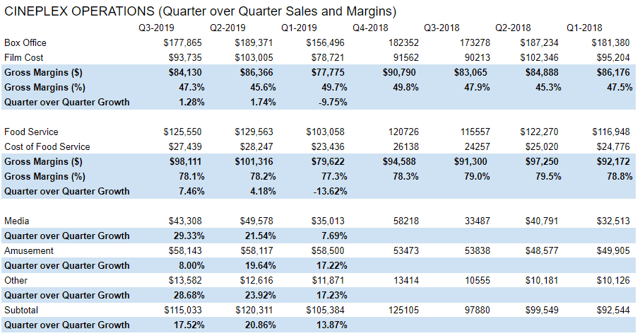 Financially, Cineplex was still posting strong numbers but the narrative had changed 2 years ago that the movie theater industry is dying because of new streaming services. This is likely the reason why the stock could not regain its former value and nothing management did could change that.

Taking a friendly takeover offer of $34 per share was the quickest way to creating the highest value.

The Industry is Consolidating

Cineplex acquired Famous Players in 2005 and purchased 24 Empire theaters in Atlantic Canada in 2013. Buying out its competitors has always been a part of Cineplex's strategy and this was what positioned it into a national chain. So a sale to a much bigger theater operator with a network across the globe seems like a natural progression.

The Deal is still Subject to Government's Approval

This friendly takeover is subject to the Investment Canada Act. Since Cineworld is a foreign corporate entity, its acquisition still needs to go through regulatory approval.

How the political winds blow on this deal is rather hard to say. I'm not sure how the Canadian government would view a foreign entity owning more than 75% of Canada's theater business. I think it is likely the deal will go through but politics is always hard to guess.

I can understand Cineplex's angle in this but I also can't help but wonder whether management had pulled the trigger to sell too early. There are merits to selling itself to gain more clout on the bargaining table. But I don't think there was enough time for its non-theater businesses to play out.

Its Junxion concept announced in November 2019 to build a food hall with food trucks, surrounded by video and redemption games has appeal. It has the potential to be a game changer but since it is not theater business related, would Cineworld nix these plans after its acquisition? It is possible.

Cineplex has until Feb 2, 2020 to find a better offer. A better offer would probably come from another theater operator but to come up with the financing at such a short time is difficult. Realistically, the likelihood of a better offer is low since this is a friendly takeover so it has the blessing of both Cineplex and Cineworld management.

In light of what is going on in the industry and the mixed results Cineplex has made to diversify itself, I think $34 a share is a fair deal. I don't think it is the best but it isn't bad either.

Sherif Samy
1.28K Followers
I studied Economics and Accounting at Wilfrid Laurier University, and I have earned designations in Certified Management Accounting (CMA CPA) and Certified Alternative Investment Analysts (CAIA).  I typically look for companies with above average dividend yields, under valued companies, or struggling companies with turn around potential.
Follow