No doubt that Brookfield Asset Management (NYSE:BAM) has been truly successful since Bruce Flatt became its CEO in 2002. Born in 1965, he is likely to lead BAM for many more years which by itself makes shareholders optimistic. The company has developed its own strategy based on certain competitive advantages and did the utmost to sharpen these advantages. I have been a BAM investor for more than 7 years with market-beating results and my only regret is that I had not discovered it earlier. The company, being simultaneously powerful and nimble, causes certain fascination and you cannot stop admiring its tireless maneuvering that almost always produces added value.

In my opinion, the company's root competitive advantage is its ability to profitably invest in real assets for long term on value basis by a TEAM of outstanding investment managers. Typically, in investment companies (like Berkshire Hathaway (BRK.B) or Markel (MKL)), we can easily designate one or two outstanding investors who run the show. It is not so with BAM, which has developed a team approach to long-term investment. Members of this team speak a very similar language and implement similar investment ideas. Often BAM would appoint new managers for its investment vehicles or newly acquired subsidiaries out of its formidable lineup and they would manage up to the highest standard (for comparison, you may recall that Warren Buffett typically acquires companies with strong management in place and emphasizes Berkshire's inability to supply good management). Other competitive advantages, such as operational proficiency and global scope, were built on top of that. At first, the company made investments work well for its own capital and later succeeded in attracting under its management third-party capital of giant institutions.

There are plenty of reasons to own BAM, but this post is devoted to a more narrow topic of BAM valuation before the majority acquisition of Oaktree (OAK). Preliminary calculations show that this transaction is accretive in the present and even more promising in the future. The recent share price increase provides support for this thesis. However, I prefer to restrain from the detailed analysis until accounting is merged and synergies become palpable. It is quite likely that once post-acquisition operating results become available for the first full quarter (in Feb 2020), the proposed valuation method will become applicable and the results could be directly compared with the share price.

At the end of each quarter, BAM presents the detailed Supplemental Information (available on the company's site) that accumulates all possible figures regarding the company's performance during the last quarter and the last twelve months (LTM). Few companies can match this treasure of numbers every quarter, but the challenge remains to extract the most meaningful data. And some important details remain opaque (as an exercise I suggest figuring out how BAM calculates its tax liabilities), or are published as footnotes in a fine font.

In terms of its structure, BAM is one of the most complicated companies. One can imagine it as a mothership (BAM itself) surrounded by 4 giant vessels (Brookfield Property Partners (BPY), Brookfield Infrastructure Partners (BIP), Brookfield Renewable Partners (BEP), Brookfield Business Partners (BBU) - for simplicity we will call them subsidiaries in this post even though it is not technically correct), further surrounded by other vessels - many different investment vehicles, big and small, public and private, subsidiaries of subsidiaries, significant investees, etc. Overall this flotilla consists of tens of significant ships with quite complicated relationships between them that include direct and partial ownerships, indirect ownerships, vertical and horizontal relationships, contractual relationships, multiple listings of same entities, common management, countless preferred issues in different currencies and so on. The mothership controls all other ships and benefits from their successes and in return supports them when needed and guarantees they stay afloat in a time of trouble.

To cope with this complexity, the company helps investors publishing in each Supplemental Information its own valuation. Until a few years ago this published figure was called "intrinsic value" but now is called "plan value".

BAM makes money primarily in 3 ways: returns on its own invested capital, earning various fees on managed capital entrusted to BAM stewardship by other institutions and retail investors (management fees, performance fees, IDRs, transaction fees) and carry, i.e., a certain type of performance fees that BAM assesses on managed capital once its returns exceed certain hurdles. So, the formula that BAM uses for valuing itself may seem straightforward at first glance: its own capital plus certain multiple of fee-related earnings (FRE, calculated as fees earned less direct costs such as compensation, taxes) plus certain multiple of targeted net carry (i.e. carry less expenses that are projected to be earned annually provided all performance hurdles are met). This approach has become quite popular and is often repeated in posts related to BAM, including those on this site. But if you are skeptical, numerous problems with this valuation method pop-up immediately:

1. Let us start with the company's own capital. It is primarily concentrated in BAM itself and its 4 big subsidiaries: BPY, BIP, BEP, BBU. All of these subsidiaries are traded publicly and you can directly calculate the fair value of the shares belonging to BAM. However, BPY trades significantly lower than its book value, while all other subsidiaries trade significantly higher than their book values. BAM has elected to use the highest number of the two and calls it "blended". Do not think the difference is small. Total BAM capital in Q3 2019 is $24.4B with the difference between book value and fair value of BPY of $4.6B ($10.6 B vs. $15.2B). Moreover, for BPY book value, BAM uses IFRS values that require periodic real estate revaluation instead of more conservative GAAP values that use historic transaction prices as depreciated. So even book figures are subject to further review (BPY IFRS figures seem realistic as in most cases they sell real estate for prices in excess of IFRS values but even this can be challenged: what if BPY sells only when the price of a building is higher than its IFRS value and does not sell otherwise?)

2. For FRE and target carry, BAM uses multiples that are quite arbitrary. Until recently it was 20 for FRE and 10 for the carry. But in Q3, 2019 these numbers were instantaneously changed to 25 and 10. Since FRE is arguably the most important part of earnings, the company immediately became significantly more valuable.

3. The use of any multiple for the target carry is doubtful. The target carry is something that the company is supposed to earn PROVIDED the investment hurdles are met. They may not be earned at all and/or if earned it will happen in the future, sometimes in the distant future as carry is typically back-loaded. Granted, so far BAM has been successful in meeting and beating its investment hurdles. But we want to value the company (in fact, any company) based on what it has done so far, not on projected and undiscounted results.

The arguments above should make one very suspicious accepting BAM calculations as something close to intrinsic value. That is, probably, why BAM changed the name for its method to "plan value". This name seems quite proper to measure the company's progress in different areas, but one should clearly distinguish between the hyped "plan value" and conservative intrinsic value.

How to Value BAM?

Is another way to value BAM possible? I think, yes, and it is pretty straightforward, but first of all I want to list methods that will not work:

In my opinion, the best logical metric to value BAM is its operating FFO (funds from operations, similar to REITs, it primarily adds depreciation to operating earnings after cash taxes). BAM recognizes its importance by publishing the FFO figures at the beginning of Supplemental Information and other investor materials. However, certain comments and adjustments are relevant when working with this metric:

In the table that follows I present the results of valuation based on calculating price to operating FFO ratio for end of period share prices. 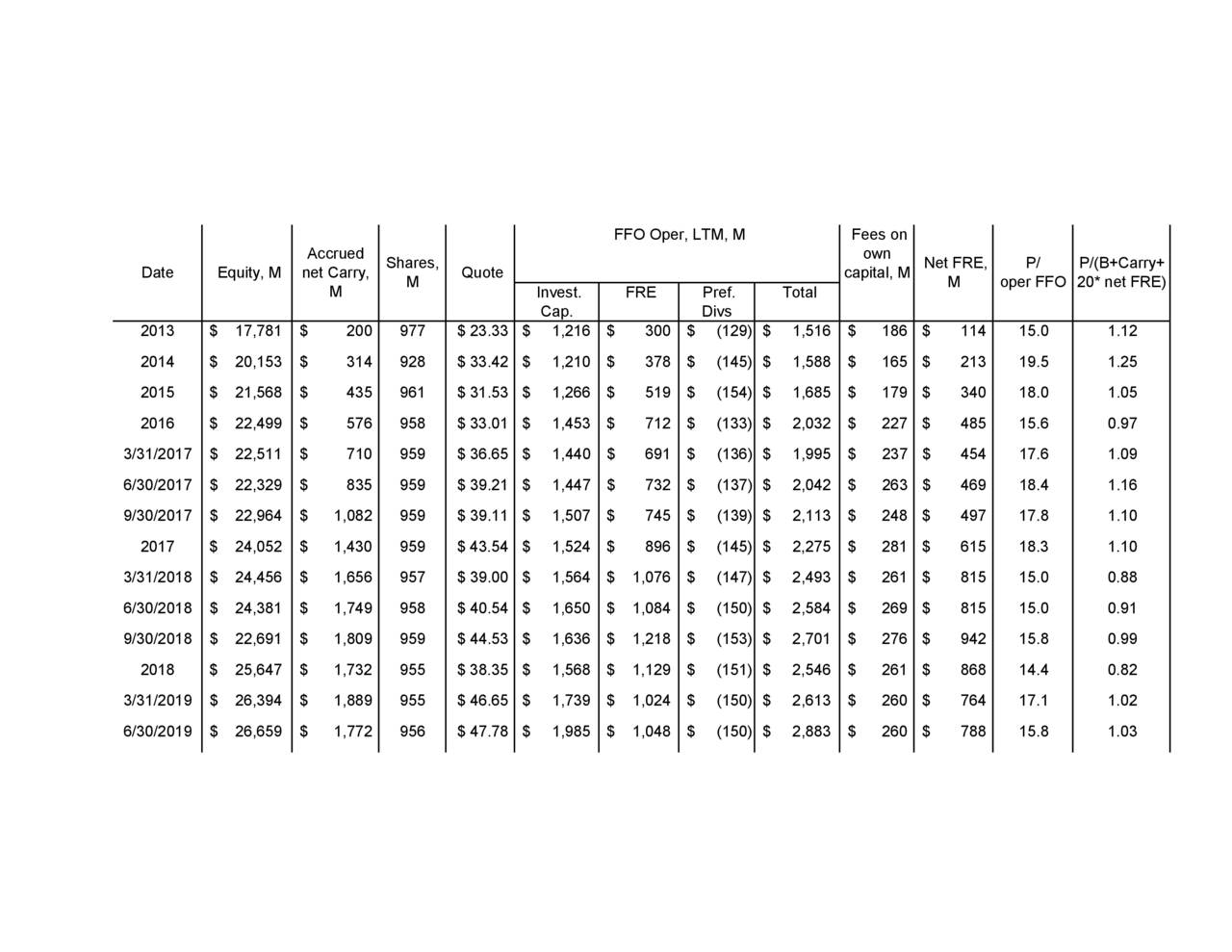 Source: company's Supplemental Information and author's calculations. All data are on a split-adjusted basis.

What immediately draws one's attention is the consistency of results: P/Oper FFO on average is between 16 and 17, quite in line with "normal" multiples. Since the table covers 7 years of market wisdom, we can use the average multiple (16.7) as a proxy for determining the intrinsic value of the company. Perhaps, it is more important that we can use this multiple to determine the suitable moments to enter or add to the existing position. Simplifying, when the P/Oper FFO ratio gets lower than 16, BAM may be considered in a "buy zone" and when this ratio gets closer to 15 it is a rather strong buy signal.

I am also presenting in the table a viable alternative: this is a valuation method based on the BAM approach but modified in a way to remove logical inconsistencies. Namely:

1)FRE is adjusted by deducting management fees on BAM own capital. I called the result "net FRE" and used BAM original 20 multiple for net FRE;

2)For equity, I used the number in financial statements without "blending" of IFRS and fair value numbers;

3)The carry is accounted for using "accrued carry", i.e. a part of the carry that is, though crystallized, still subject to clawbacks

This method works well too since the ratio of the modified BAM method value and the share price is close to 1. Both results are generally in agreement with each other and you can use whichever you like more. I prefer 16*Oper FFO, since in the modified BAM method 20 multiple for FRE is arbitrary, and it is not so simple to calculate management fees on BAM's own capital - I did it approximately, with certain assumptions, no doubt making some errors in the process.

After announcing and closing the Oaktree acquisition, the formulas are not expected to work until we fully account for the results of the acquisition on an operating basis (i.e. knowing FFO of the combined company calculated in a consistent way for at least one full quarter). Correspondingly, I did not present the numbers for the last quarter.

Since Oaktree's business model is similar to BAM's, I expect the proposed valuation method keeps being applicable. It would be interesting to revisit this topic with the after-acquisition numbers available which I may do in the future.

Alexander Steinberg
2.26K Followers
Ph. D. and MBA. I worked in executive/management positions for big US companies, then ran my own business for about 15 years, and upon exiting, turned to full-time investing. I primarily manage my own funds and consult a limited number of friends and clients.
Follow

Disclosure: I am/we are long BAM, BIP. I wrote this article myself, and it expresses my own opinions. I am not receiving compensation for it (other than from Seeking Alpha). I have no business relationship with any company whose stock is mentioned in this article.