Don't Rush To Take A Position In This Merger

It's still too early for speculators to make a knowledgeable call on the proposed merger between Fiat Chrysler Automobiles N.V. (FCAU) and Peugeot SA (OTCPK:PUGOY), the European maker of Peugeot, Opel, Vauxhall, and Citroen. For starters, the deal isn't expected to close for another year, at least. Secondly, regulators in the U.S. or the E.U. could stop the combination in its tracks. Finally, demand for vehicles is cooling worldwide - which means that a bargain price now for either security could get even better.

A better idea for this deal is to wait and watch a while longer. A major paring of excess capacity, cost-saving via sharing of vehicle platforms and the proposed payment of extraordinary dividends and asset spin-offs on top of regular payouts to shareholders of both companies could make ownership of the combined company an attractive play. Neither side has to wait until the merger closes to begin taking steps to economize - if the companies signal or hint at the likelihood of trimming production capacity, that would constitute a positive signal for investors.

By merging, the two automakers will gain an advantage needed to prosper in a global automotive industry facing unprecedentedly large advanced technology investments required to remain competitive: scale. According to an FCA presentation using 2018 global sales numbers, FCA and Peugeot would go from being the ninth and tenth largest automakers to the fourth-largest worldwide after Toyota (TM). In theory, the combined company would be able to cut all sorts of redundant cost.

But the theory is only that. Deciding which car platforms to ditch could be tricky and possibly contentious if national pride intervenes. One needs to look no further than the current stalemate at the Renault Nissan Alliance - or recall the failed DaimlerChrysler merger - to observe how parochial interests tied to nationality can play havoc in the global automotive enterprise.

Trade unions are another worry. The companies are saying they don't anticipate closing staff or firing workers. The reality is that trimming plant capacity will be necessary; reducing jobs can be accomplished with buyouts. Groupe PSA already has shown that it can achieve savings with such actions. 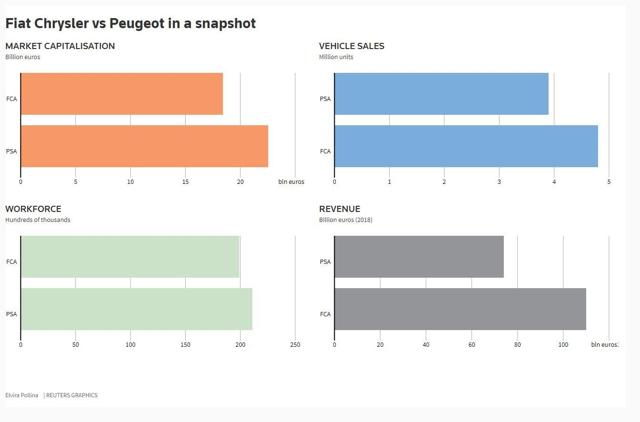 After stepping down as No. 2 at Renault Nissan in 2014, Tavares was tapped to run troubled PSA Groupe, parent of Peugeot. In five years, he not only turned PSA around, earning the praise of European analysts, he has also acquired and integrated General Motors's chronically money-losing Opel and Vauxhall operations. Operating a global automaker is extraordinarily difficult. Carlos Ghosn and the late Sergio Marchionne demonstrated great ability. Since leaving the picture, Tavares qualifies as automaking's new star.

"The transformation of PSA under Tavares has been extraordinary," Max Warburton of Sanford Bernstein wrote last June, as reported in Automotive News. Tavares successfully applied his proven approach on cost, capital discipline, distribution, and pricing to Opel/Vauxhall, Warburton said.

According to the merger agreement, Tavares will serve as CEO of the new company under a five-year contract. Mike Manley, who succeeded the late Sergio Marchionne as CEO of FCA, presumably will continue to lead FCA's U.S. operations. John Elkann, FCA chairman, will become chairman of the new company.

FCA has two cash-generating crown jewels, Ram pickups and the Jeep brand, which will come in handy for Tavares, who must spend to restructure European operations and solidify profitability. Fiat has long been "the sick man" of the European car business, a money loser and a headache to its owners. The combined company must be able to figure out which of the Peugeot, Opel, and Fiat architectures to throw out and to build vehicles for all its brands on the remaining one or two while shutting down excess plant capacity - the Volkswagen model. It's very easy to understand and articulate these operating principles (and to write these words) but a much different story to pull off such a feat. Tavares's performance so far suggests he just might be the right person for the job.

On top of the investment pressures pushing the automakers toward a merger, European regulators are lowering the boom on carbon emissions. PA Consulting, as quoted by Reuters, forecasts that FCA might be liable next year for a 430 million euro fine for failing to comply with a 95-gram per kilometer limit on 95% of its cars. The current gram average in Europe is 120.5 grams. The limit will be lowered by 15% in 2025 and another 37.5% by 2030. Clearly, the capital costs of developing and adapting engines for lower CO2 emission, not to mention battery-powered electric vehicles and hybrids, will be far lower for the combined company to the extent they can be rationalized over a larger number of vehicles.

Prior to closing, FCA will distribute a special dividend of 5.5 billion euros to its shareholders, while PSA Groupe will spin-off to shareholders the 46% stake held in auto parts company Faurecia (OTCPK:FURCF). But that's not all: FCA and PSA will each distribute an ordinary dividend of 1.1 billion euros in 2020. At the closing, PSA shareholders would receive 1.742 shares of the new company for each PSA share, while the FCA shareholders will get one share of the new company for each FCA company.

According to the calculations of FilmNoir, a Seeking Alpha commenter, that could mean better than a 30% yield for FCA shareholders in a year, provided the deal closes. As FilmNoir opines: "Not bad."

These payouts indeed may make an investment in one or both of the stocks worthwhile. But it's still too early. A little time and patience invested in watching the merger take shape and listening to the comments of executives and regulators would be well advised.

My partner Anton Wahlman and I attend new vehicle introductions and technology briefings by top automotive and mobility executives throughout the year. Our value proposition is to share insights and make calls that will help investors.

Doron Levin
855 Followers
I am a journalist based in Detroit, having spent almost my entire career writing about business and economic subjects for The Wall Street Journal, New York Times, Detroit Free Press and Bloomberg. I'm the author of two books and am an acknowledged expert on the world automotive industry.
Follow