Facebook (NASDAQ:FB) has multiple earnings drivers starting now. But the big hype monster is any positive news on Libra moving forward. Then I expect the stock to go nuts. And if not we have the core business, which is starting to improve again.

If you've followed my work you know that I closely watch and predict earnings. I look for earnings inflections that can drive the stock price. Stocks are valued based on their future earnings potential. Facebook is showing signs of a reacceleration in earnings.

For me gross margins are the biggest shift and driver to EPS and have shorter-term reasons that this can continue. My guess is that most are not focused on this core earnings driver. EPS drive stocks.

There's a few ways to look at this. First, "cost of revenues" year-over-year growth is slowing. 79% growth down to 46% down to 30% last quarter. Costs are slowing meaningfully. That should get gross margins to start moving up.

The main driver to cost of revenues is depreciation which is driven by capex.

Here's capex growth slowing. I'm setting up a picture for you that margins and earnings are about to pop.

Look at that capex slowdown from 90% growth to 40% to 9%-10% in just a few quarters. That slows down depreciation in that cost of goods sold line which boosts gross margins. I think this is going to be a big source of upside for the company's earnings over the next couple of quarters.

Nearer term the company also has some one time accounting benefits because they are getting more use out of their server racks. So they have a couple of drivers why gross margins could pop.

And if you notice the overall gross margins last quarter were down 30bp (basis points) (-.3%) which is much much better than what they had been tracking down 410bp (-4.1%) just a few quarters ago.

We have gross margin showing a bottom. Now a core driver to revenue growth and long-term value is improving - daily active users.

User growth has stopped falling. You see the bottom (above) in the first quarter. Since then growth rates have improved. That's a big driver to revenues and a core driver to understand the longer-term health of the business which helps drive the valuation.

What drove that better user growth. The company said they simply had good engagement internationally. To me that doesn't sound like one timers.

Here's some quotes that I liked that means to me this user growth acceleration is not one time.

Above - revenue and revenue growth metrics. Look at the line above that says "slowdown." You see a steady sequential slowdown in the year-over-year growth rate until Q2 and Q3. The last two quarters that metric started to reaccelerate.

Facebook told the Street to expect that decline to lessen in 2020. We know Facebook has been conservative in their guidance. I think there's a good chance of flattening out in revenue growth in 2020 and maybe a chance for a pickup in revenue growth.

Here's what they said on last earnings.

"...we would expect our revenue growth deceleration in 2020 versus the Q4 rate to be much less pronounced."

They continue to expect a Q4 slowdown but they've expected a slowdown and it's no longer materializing. So I think they are being conservative. Add to that, they are telling you to expect a reacceleration in 2020. I think that's huge.

Libra Can Get This Stock To Go Nuts

Pay and Libra are two coming drivers but not near-term benefits to earnings.

Pay is rolling out slowly to test it so they don't hurt the user experience. This is not a near-term driver but a longer-term driver.

The company has no timeframe catalysts for Libra.

That said I'm very bullish on Libra. I think Facebook gets it through government approval and this stock can go crazy at some point because of it.

We've seen stocks go nuts on crypto over the last few years. This hasn't happened yet but I think we'll be looking back to these comments when Libra starts having momentum and the stock will be skipping higher. Not sure when that is but in the meantime we have more positive core fundamentals with an option in Libra happening some time to pop the stock.

Here's a few that went nuts on crypto hype. But Facebook's Libra is not hype. In crypto to win you need scale so you get usage and avoid being hacked. Facebook has that so this can turn into the real deal. Plus if Facebook has global governments quaking, you know they're going to have some clout. This hype monster can turn into something real. First, though I expect the hype monster.

Here's a few examples of hype monsters that didn't work out. But the stocks went nuts. 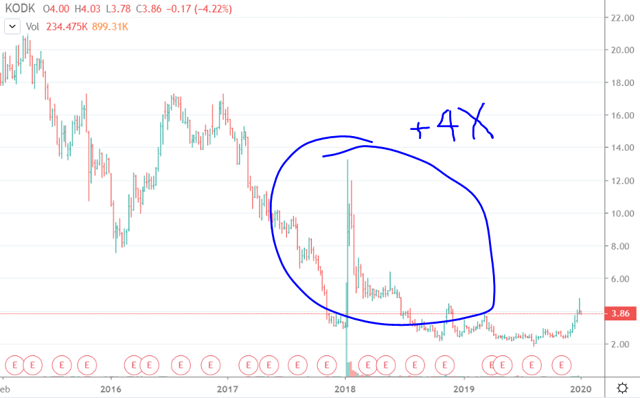 Eastman Kodak (NASDAQ:KODK) was up 4x in a flash on some ICO hype. Facebook can't see a big up move on the first news that Libra's moving forward? 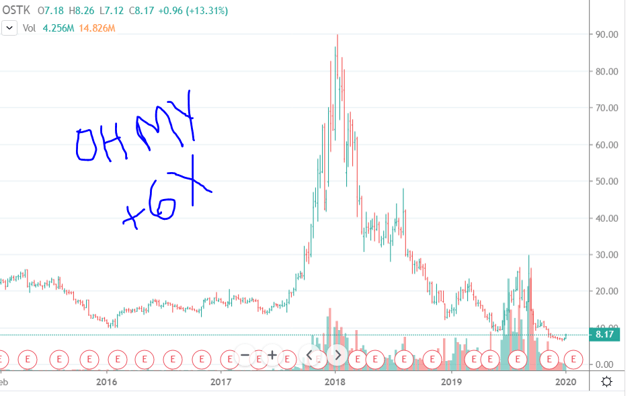 Overstock.com (NASDAQ:OSTK) was up 6x on crypto hype. 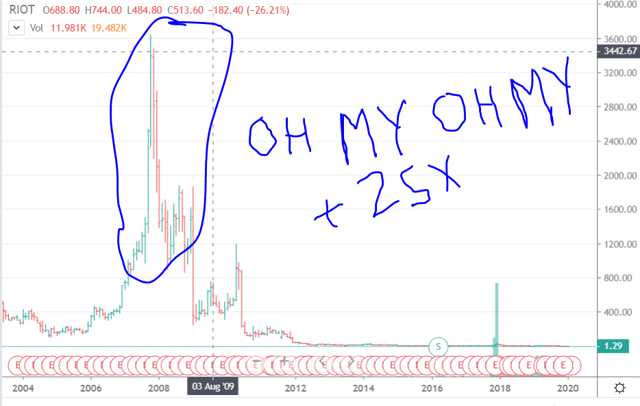 I don't know why Facebook's stock can't also go nuts like some of these other examples. I'm not saying up 25X, but it can move.

We have big upside in Facebook just on EPS and fundamentals (full model: Paywall). So you get a free call on the crypto hype monster trade. But fundamentally Libra can be legit, making this better than a hype story. It could actually have legs.

I'm excited to like Facebook. We have key metrics that are improving. I love the revenue growth acceleration. We see it materializing. Facebook is doing enough tweaks to drive ad revenues on their core products to drive growth.

And near-term gross margins, I think, will drive the EPS driving the stock.

Add to that I think there's enough chance for this to turn into a hype-monster as well. Even though there are no set plans Libra's expected to launch this year. Any progress and I think the stock starts moving.

"pro with a great hit rate."

Work side-by-side with a pro with 20+ years experience working for big funds to help you identify big stories and catch big stock moves.

Additional disclosure: All investments have many risks and can lose principal in the short and long term. The information provided is for information purposes only and can be wrong. By reading this you agree, understand and accept that you take upon yourself all responsibility for all of your investment decisions and to do your own work and hold Elazar Advisors, LLC, and their related parties harmless. All model portfolio trades are hypothetical to show direction, conviction and timing. Performance excludes all relevant transaction costs. Elazar and its employees do not take individual stock positions to avoid front running and other potential customer related issues.

48 Comments
To ensure this doesn’t happen in the future, please enable Javascript and cookies in your browser.
Is this happening to you frequently? Please report it on our feedback forum.
If you have an ad-blocker enabled you may be blocked from proceeding. Please disable your ad-blocker and refresh.