We have been following the SECURE Act for more than a year at Yield Hunting. Finally, we can report that on December 20th, President Trump signed the SECURE Act into law as part of the year end appropriations bill.

Most of these changes take place in 2020... so how will they affect you? And remember, several of them are not just for those at or near retirement. They can have a profound effect on the way we all save for retirement.

Here are the major takeaways:

Let's start with the bad news. The STRETCH IRA is dead, replaced with a 10-year rule. The STRETCH IRA allowed non-spousal IRA beneficiaries to "stretch" required minimum distributions (RMDs) from an inherited account over their own lifetime (which allowed the funds to potentially grow tax-free for decades).

The Ten Year Rule now means all inherited IRAs must be fully withdrawn by the 10th year following that inheritance. Within that 10-year period, there are no distribution requirements giving beneficiaries some flexibility. This could have been much worse as a 5-year rule was originally proposed.

Some beneficiaries are not subjected to the new rule, including:

Required Minimum Distributions (RMDs) will go from age 70.5 to 72

The current RMD age is 70.5, and a lot of planning has been centered on that number. The new age at which point the government forces you to start taking distributions is 72. While the 1.5 years is not much, it does help many people who would have otherwise been forced to pay a lot of taxes. You actually do not have to take the first distribution until April 1 of the following year after you turn 72 (favoring those born in the first half of the year).

No Age Restrictions for Contributions past age 70.5 to Traditional IRAs

Traditional IRA contributions are no longer prohibited after age 70.5. This is beneficial as Americans live longer and work longer, they can now contribute longer into their lives.

Part time employees are now eligible to participate in saving for retirement. Previously, employees who hadn't worked at least 1,000 hours were not eligible. Starting in 2021, the new retirement law guarantees 401K plan eligibility for employees who have worked at least 500 hours per year for at least three consecutive years. The part-timer must also be 21 years old by the end of the three-year period. The new rule doesn't apply to collectively bargained employees, though.

Currently, rules require disclosures on the total balance of your retirement accounts. The SECURE Act will now require 401K plan administrators to provide annual "lifetime income disclosure statements" to participants. These statements will show how much money you could get each month if your total 401K account balance were used to purchase an annuity.

The new retirement law also makes it easier for 401K plan sponsors to offer annuities and other "lifetime income" options to plan participants by taking away some of the associated legal risks. These annuities are now portable, too. So, for example, if you leave your job you can roll over the 401K annuity you had with your former employer to another 401K or IRA and avoid surrender charges and fees.

Penalty-Free Withdrawals for Birth or Adoption of Child

The new retirement law lets you take out up to $5,000 (married couples can each pull $5,000 from their own accounts) following the birth or adoption of a child without paying the usual 10% early-withdrawal penalty. The funds are still subject to income tax, unless they are repaid. You have one year from the birth (or adoption) date to make the withdraw without being subject to the 10% penalty. If you deposit the money back into the retirement, it will be treated as a rollover and not be part of your taxable income.

The SECURE Act actually makes no changes to the date at which individuals may begin to use their IRAs to make QCDs. So, at age 70.5, while you no longer have to take an RMD, you may still use the IRA to make a QCD of up to $100,000 for the year (after turning 70.5). And when starting RMDs, the dollar value given to charity in a QCD will reduce the required minimum distribution at age 72. 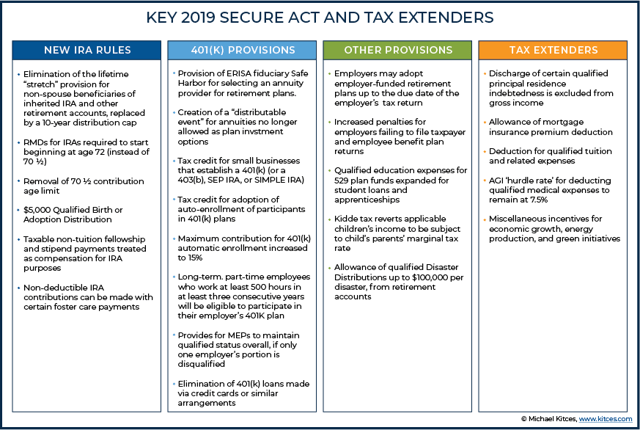 Our Yield Hunting marketplace service is currently offering, for a limited time only, free trials and 20% off the annual rate!

Our member community is fairly unique focused primarily on constructing portfolios geared towards income. The Core Income Portfolio currently yields over 8% comprised of closed-end funds. If you are interested in learning about closed-end funds and want guidance on generating income, check out our service today.