Sibanye Gold Limited (NYSE:SBGL) is the world’s largest producer of platinum, the second-largest producer of palladium, and number three in terms of gold output. The company, based in South Africa along with major mining operations in the United States, is benefiting from surging metals prices, particularly palladium trading at an all-time high near $2,000 an ounce. The stock is up 235% over the past year in what has been an impressive turnaround following some labor strike-related production impacts in early 2019. Bullish sentiment is being supported by an expectation of higher production and firming profitability with an overall more positive outlook. Even considering the massive rally recently, we see more upside potential as shares still trade at a discount to peers which we expect to narrow going forward. This article covers recent developments and our view on where the stock is headed next.

A number of major acquisitions made by Sibanye in recent years, including Aquarius and Rustenburg in 2016 along with its merger with U.S.-based Stillwater Group in 2017, have helped to expand the profile of the company. Looking back, these deals were made at favorable prices with strategically good timing positioning the new group as a leader in the market.

While the company was challenged over the last couple of years based on weak mining environment labor disputes in the South African operations, the outlook is much more positive now. In 2019, earnings were pressured by a 5-month long gold workers' strike which has since been resolved with a labor agreement. In November, the company announced an agreement with South African platinum miners, removing another layer of uncertainty. Approximately 27% of firm-wide precious metals reserves and 32% of adjusted EBITDA in the last quarter are based on U.S. operations highlighting some of the new diversification. 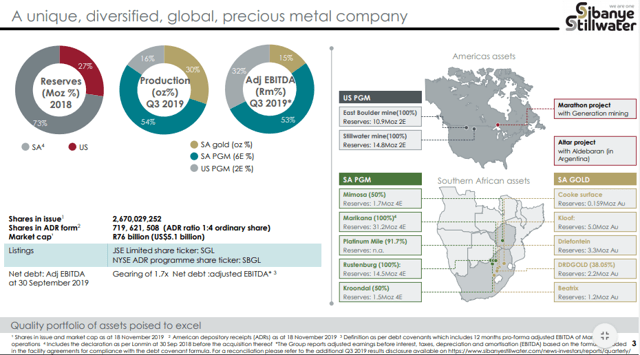 The major development has been the surge in palladium pricing over the past year. The momentum is being driven by a combination of strong demand from the automobile industry as a key component of catalytic converters and overall tight supply globally. There have also been power shortages in South Africa leading to production disruptions for SBGL and the industry in recent months. It's simply another theme along with the broader rally in precious metals, including gold, silver, and platinum on global macro trends, including low interest rates, global cyclical concerns, and Middle East tensions.

For Sibanye, the company's diversification across precious metals means it can benefit regardless of which metal is leading. The company last reported results for its fiscal Q3 back in October with U.S. operations platinum group metals (PGM) production of 147.4k oz, up 5.9% from 139.2 in Q3 2018. South Africa PGM production of 518.6k oz increased by 70% from 305.2k oz in the prior year with the result driven by the consolidation of the Marikana mine since the Lonmin acquisition which closed in 2019. Gold production was down 7% given the timing of some shaft closures. Overall, group EBITDA increased to $377.4 million compared to $115.9 million in Q3 2018. 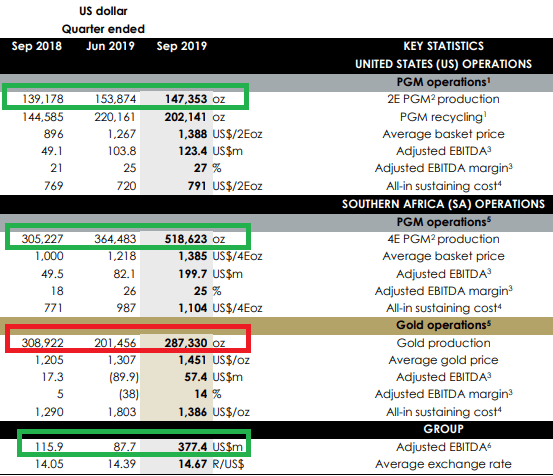 The message from management was that overall operations had normalized since the gold labor union strike that ended in April of 2019. There is an expectation for updated 2020 guidance when the company reports Q4 and full-year results in mid-February. One of the positive trends is a lower leverage ratio that has declined to 1.7x in terms of current net debt to adjusted EBITDA over the trailing twelve months. SBGL expects its net debt to adjusted EBITDA to approach 1x in the current metals pricing environment.

Favorably, the company is looking at potentially restarting a regular dividend in the second half of 2020 which was suspended back in 2017. Separately, comments made by management suggesting they may consider moving the company's primary listing to the NYSE from South Africa in the future would likely be positive for the perception of the stock's corporate governance and investor sentiment. From the Q3 earnings press release:

With precious metals prices rising further into Q4 2019 and further enhancement of our safe production delivery, the outlook for the remainder of the year remains positive. Should this momentum continue as expected, the Group will be on track to achieve its leverage target of 1x net debt: adjusted earnings before interest, taxes, depreciation and amortisation (EBITDA) and potentially resume dividend payments in the latter half of 2020.

We previously covered SBGL with a bullish article here on Seeking Alpha back in September when the stock was trading at just $4.50. Clearly, we did not expect the price to more than double in such a short period of time, but the current momentum simply confirms what is an overall positive outlook. We like the company's leadership position in PGMs and see recent trends, including the ongoing deleveraging and firming profitability, as supporting more upside.

In terms of EPS estimates for 2020, a single published estimate has SGBL earning $1.56 per share for the full year ahead. By this measure, the stock is trading with a forward P/E of just 6.4x. Recognizing the ambiguity of a single estimate to represent the consensus, even taking a more conservative outlook and assuming the company can reach EPS of $1.00 for 2020, the stock is still trading an attractive 10x forward multiple. Based on the reported adjusted EBITDA level of $377.4 million achieved in Q3, an annualized run rate of ~$1.5 billion implies an EV to EBITDA multiple of 8.3x which is attractive in our opinion. Earnings are expected to accelerate going forward at current market metals pricing.

This is a case where the stock trades at a discount to the industry in part, given its extensive operations in South Africa which are seen as a higher risk jurisdiction. The miners with a higher focus on gold also typically trade at a premium compared to platinum and palladium which is still seen as a more industrial metal. In this regard, the steps the company has made towards increasing its footprint with U.S. gold operations and the possibility that it could move its primary listing to the NYSE in the future should help these valuation spreads converge over time.

Recognizing the quality of the company's assets and global leadership position in one of the hottest commodities, we expect momentum in shares of SBGL to continue. Considering the massive rally, we expect some consolidation in the near term but would look to add on any extended dip under $10 per share. We rate SBGL as a buy, based on attractive trends in fundamentals including an ongoing deleveraging, expectation of higher profitability, and an overall bullish outlook for precious metals. The next target is the 2016 high of $13 per share which we believe could be reached this year.

To the downside, the potential for an extended move lower in PGM prices and gold represents the main risk. We are looking at the $1,350 per ounce price in gold and $1,600 in palladium as important support levels to hold to maintain the bull market trend in precious metals for the year ahead.

Disclosure: I am/we are long SBGL. I wrote this article myself, and it expresses my own opinions. I am not receiving compensation for it (other than from Seeking Alpha). I have no business relationship with any company whose stock is mentioned in this article.

103 Comments
To ensure this doesn’t happen in the future, please enable Javascript and cookies in your browser.
Is this happening to you frequently? Please report it on our feedback forum.
If you have an ad-blocker enabled you may be blocked from proceeding. Please disable your ad-blocker and refresh.