Part 1 of this series covered the Dry Bulk segment and can be found here.

Part 2 of this series covered the Crude Tanker segment and can be found here.

There are just some things you can't control. Growing up surfing you quickly learn that the weather is one of those things. You can plan surf trips, make the best preparations, get all the right gear and do everything perfectly only to find that the conditions never came together and your trip is a bust.

This kind of sums up the LNG market lately. It could be much better if the weather had cooperated. Instead, we are getting a continuation of last year's mild winter conditions in many major demand epicenters.

Normally, short-term disruptions come with a timeline, but once again, there are some things you just can't control.

The LNG market isn't bad. In fact, let's not be greedy. Charter rates are still the strongest in several years and LNG adoption/demand growth continues to impress compared to just a few years prior to 2019. 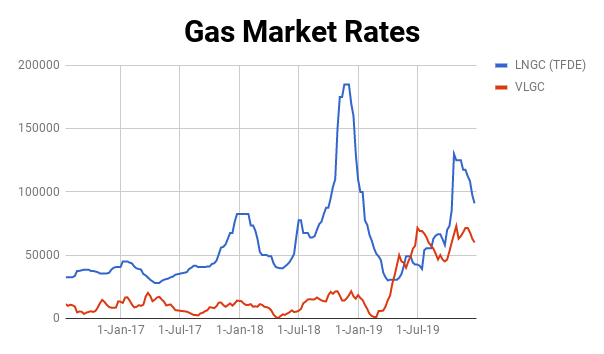 But it could have been so much better.

Aside from the weather, we also have seen an impact on cargo mile demand as flows from the US to China have been curtailed. Furthermore, with East Asian storage at high levels cargoes are being re-directed to Europe which represents a much shorter haul. Finally, a slowing Chinese economy has played a minor role in reducing demand.

Last year saw LNG shipping demand trail off during what would have been a seasonally strong point as results of that warm winter could be found in reduced demand for gas leading to increasing inventory builds. Those stockpiles led to a later-than-usual uptick in seasonal demand this year.

So far the Chinese winter has again been more mild than normal, along with most major Asian demand epicenters. Temperature forecasts for Beijing and Shanghai are expected to be warmer than usual until mid-January, according to Refinitiv’s weather data. This weather report accompanies other reports of cargo reselling and tank topping in China.

Fortunately, while the demand side has sputtered a bit due to the weather, it has still proven capable of absorbing a fair amount of large LNG carrier deliveries in 2019. 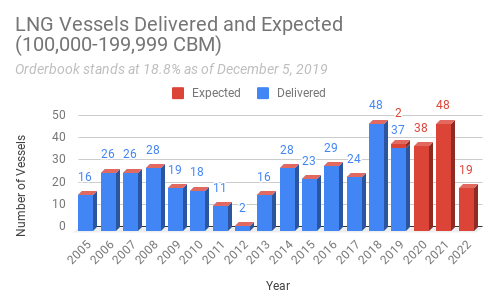 Can the market absorb another significant year of vessel deliveries if we find ourselves in an externally imposed lackluster demand environment from mild temperatures?

Gross fleet growth in 2020 will likely come in around 6.6%, down from the 6.8% we saw in 2019. In any normal year, I would be able to answer with confidence, yes, fleet growth will be dwarfed by the demand side.

Unfortunately, 2020 is presenting a bit of a wildcard with the extended bearish weather pattern. It may, in fact, lead to a weaker 2020 compared to 2019, but that is dependent on the degree of deviation from the norm.

A continuation or even increase in these mild temperatures will weigh on 2020 demand, perhaps even more than it did in 2019, as winter stockpiling will be curbed and inventories will have to be managed. However, a cold snap could provide a respite.

Recall, the elasticity of gas for residential use and how much of a role it plays. The degree of elasticity compared to other commodities like crude oil is much greater.

Remember the crude oil stockpiling that took place around 2015? The current LNG stockpiles may be different in origin but the end result will be the same - an eventual slowing of LNG flows unless something changes.

But a demand side shift could always be that wildcard for natural gas. A cold snap would not only draw on inventories but likely contribute to spot market activity, especially in China.

Looking beyond next year, 2021 vessel deliveries will be fairly significant. Unless we see an end to this temperate weather pattern before the end of the 2020/2021 winter, we could see a bearish pattern emerge. Remember, 2021 will see gross fleet growth of approximately 8.3%.

The LNG trade hit a snag with the trade war. Prior, as LNG out of the US flowed to China freely, we saw total LNG cargo miles into China skyrocket, rising approximately four-fold from the beginning of 2016 to the end of 2017.

But since the start of 2018, cargo mile import growth into China has stalled in a huge way, even as volume gains persist (though not at quite the rapid pace as in 2018). This isn't a coincidence as peak imports from the US to China also came in January of 2018 and have since sunk to practically nothing.

Again, part of a trade deal would likely involve a return to trade normalization along with increased energy and commodity purchases. China continues to set ambitious goals for gas adoption and coal switching. Therefore, LNG will likely be another winner in any sort of comprehensive trade deal.

Other impacts to cargo mile growth could be found in the inauguration of the Power of Siberia pipeline. Though it can bring significant volumes, the point of importation and infrastructure restrictions will likely keep most of that gas in northern/inland China, away from major population centers and demand epicenters which are in the southern/central coasts and already amply supplied by LNG handling and regas infrastructure.

Believe me, I hate to come out with a forecast that involves an unpredictable factor like weather, but that's exactly what will play a major role in 2020 and beyond.

The other major unpredictable would be a trade deal and exactly how LNG will be factored into the picture.

Nevertheless, the supply/demand balance still continues to trend in a favorable way as of late; however, the year-over-year gains are nowhere near the previous years. 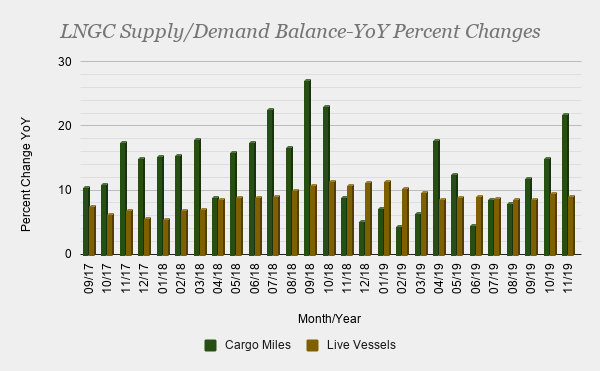 What's worrying for 2020 is if we look at the off season in 2019, compared to 2018, we saw several months where supply outpaced demand due to the lack of stockpiling.

Unless inventories are utilized to a meaningful degree by spring of 2020 we will see this seasonal low manifest in a more pronounced manner than usual. This means we could be in for a bit of a roller coaster with rates.

But here's another wildcard. Suppose we do get that more pronounced seasonal low this summer, only to have it followed up by a bitterly cold winter in late 2020 and early 2021. In theory, we could see one of the wildest shifts in rates in quite a long time making for a very interesting trading opportunity.

Let's also remember the role that China's policy directed coal to gas switching has had on the market. Those efforts tapered off a bit following a winter which saw ambitious conversion plans being met with extremely cold temperatures causing price spikes and distribution nightmares.

But with high inventories, low prices, and mild temperatures dominating forecasts, the coming months could see this switch taken up again with renewed vigor. Especially as the Chinese government seeks to find ways to meaningfully inject stimulus. Remember, it's also a slowing Chinese economy that has been blamed as well for some of the slowing demand growth, so a well-placed stimulus could be beneficial for LNG.

What everyone wants to know in two sentences or less is, bull, neutral, or bear?

Yes, there is a very good chance the weather could work against this prediction. But to bet on weather abnormalities to continue instead of averages returning is typically unwise. If we get those colder temperatures, inventories in some more developed Asian markets (Japan, S.Korea) will need to be cleared a bit over the course of 2020 before we can again see that strong seasonal action toward the back half of the year. However, China would likely respond far more quickly in the spot market due to its lack of storage capacity.

Ample supply and low prices preceded this last round of historic demand growth and LNG adoption, and likely will spur another round here. The market is well structured and long haul potential is growing as supply and demand epicenters become more dislocated over the course of the next couple years.

Any comprehensive deal between the US and China would likely benefit long haul LNG. Chinese stimulus may include increased coal to gas switching at this opportune moment, which is the largest source of LNG demand growth and would be bullish news.

Finally, India will be the dark horse to watch as they continue to increase imports and are now looking more politically aligned toward a coordinated energy policy. Can India see double-digit import growth over the course of 2020? I believe it's possible.

We are constantly bringing you more value. Look at our latest upcoming event schedule with exclusive interviews with CEOs, professional investors and more.

Sign up now to lock in current rates, with 2 weeks risk free, no obligation.

James Catlin
4.98K Followers
Author of Value Investor's Edge
The ultimate shipping and logistics platform.
James has degrees in both Economics and Political Science. He is a small business owner with several years of past political experience and 20 years of active investing.
The majority of James' work can be found on Value Investor's Edge.

Value Investor's Edge is a top-rated research service dedicated to offering actionable trades and strategic income opportunities. We now cover a variety of deep value and income-driven sectors, while maintaining our focus and very profitable record of shipping industry coverage. Members receive exclusive access to over a dozen reports per month, including regular shipping and commodity macro analysis from James Catlin, exclusive content by top-tier deep value analyst J Mintzmyer and industrial and MLP ideas from Michael Boyd. This winning team has developed a dedicated following of highly knowledgeable investors and industry professionals who also share their own research, thoughts and ideas.