The AUD/CAD pair has risen recently, but still remains within its short-term trading range (noticeable on a daily candlestick chart).

Speculators are still bearish on the pair, although short positioning is no longer as extreme as it was in 2019.

Given the negative interest rate differential on the AUD/CAD pair and the near-term risk of Australia lowering rates further, the optimism apparently still priced into the bond market seems inappropriate.

In the last article I wrote on the AUD/CAD pair, which is the value of the Australian dollar expressed in terms of Canadian dollars, I believed that the pair offered short-term upside potential with longer-term downside. Since that article's publication on November 2019, AUD/CAD has been mostly range-bound, within the trading range previously identified.

The chart below is a daily candlestick chart showing recent AUD/CAD price action within its prevailing trading range (the shaded area). The vertical red line draws attention to the date of my last article's publication in November; the prediction has mostly been correct thus far, however we would now want to see some follow-through to the downside.

As we can see, AUD/CAD is now trading roughly at the center of its short-term trading range. An updated chart is provided below, which provides a horizontal line to illustrate the midpoint of the current trading range at 0.8990.

The price, at the time of writing, has once again found its way to the midpoint, which is serving as an apparent area of support. Interest rates are important as ever; the stronger interest rate of one currency, the more likely that currency will appreciate, all else equal.

This is because higher interest rates improve the ongoing net interest income (or reduce the ongoing net interest expense) associated with holding a particular currency in terms of other currencies. The updated chart below illustrates the difference between the one-year government bond yields of Australia and Canada (see the red line, set against the far-right y-axis). It is currently in negative territory at about -0.82%.

Notice both that the yield spread roughly correlates with the price action of the pair (as it usually should) and that the yield spread is most recently making lower highs (about -0.80% on December 31, 2019, versus -0.78% on October 31, 2019; in other words, while the interest rate spread is still negative, the highs are becoming more negative in spite of recent bullishness in the spot price of AUD/CAD). 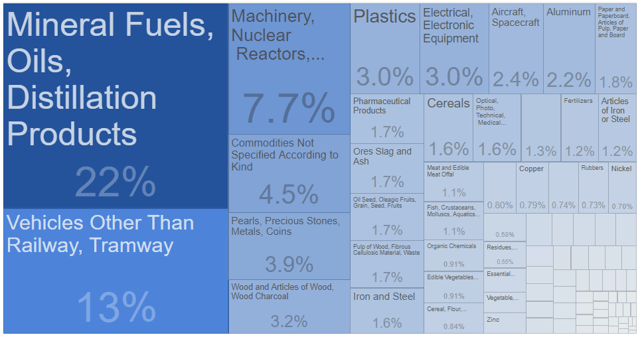 Therefore, while only a simple tool, we can usefully monitor the ratio between gold and oil prices to gauge the potential for a breakout or breakdown of the AUD/CAD currency pair. This can be used to support (or reject) an existing thesis; our current thesis would suggest further downside in the AUD/CAD pair, therefore the chart below should be of interest.

The chart above includes the crimson line, set against the far-right axis, which is the ratio between the gold price (in U.S. dollars) and WTI oil prices (in U.S. dollars). The blue line is the 50-day moving average.

In any case, the key takeaway point is that the current relationship between gold and oil prices is indicative of further downside for AUD/CAD.

However, you can also notice that during much of 2019, our ratio was rising and above its 50-day moving average, in spite of the AUD/CAD pair struggling to sustain higher levels. We should consider two factors here: firstly, the market may be otherwise overwhelmingly bearish on the AUD, regardless of whether commodity markets support upside, and secondly, we should not forget that this currency pair is still fundamentally negative carry (the interest rate spread is negative, hence making short positions more attractive).

We can confirm this perspective per short positioning data from the Commodity Futures Trading Commission (see here); the data shows that speculators have been heavily "short" the Australian dollar throughout much of 2018 and all of 2019 (and in 2020 thus far). 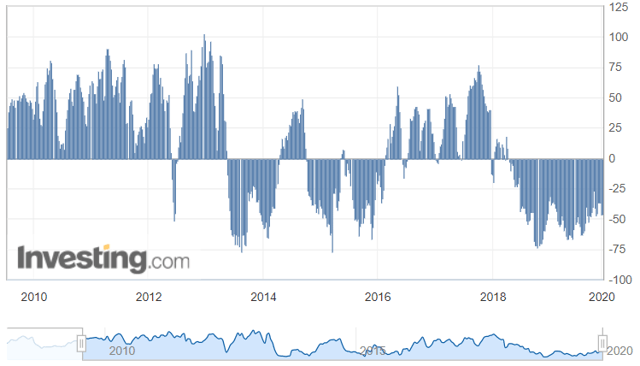 Going forward, the pressure is likely to remain on the Australian dollar. Added pressure recently has come in the form of natural disaster: an extremely unfortunate situation which has led to a loss of both human life and wildlife, and brought "historic levels of destruction" to the country (see news article linked to above from NPR).

This negative chain of events could force the Australian central bank into action, encouraging them to loosen monetary policy further. That is a speculative thought, but still a very much possible conclusion to assist the Australian economy in the short term (the next RBA meeting is on February 4, 2020, which is when any decision would be made). Still, given that the bond market is still technically optimistic, we could well see a (further) reduction in the bond market's optimism in the short term, and possibly even see the bond market price in some pessimism (ahead of the February 4 central bank meeting).

Ultimately, the downside risks for AUD/CAD currently appear to outweigh any upside potential. We should expect lower prices in the near term.