We will miss 2019. While 2018's odd confluence of a weakening economy, rising trade frictions and monetary tightening led to losses in virtually every asset class, this year has been the exact opposite. Monetary stimulus, economic stabilization and an erratic but ultimately successful reduction in geopolitical risk produced a stellar year for risky assets (see Chart 1). 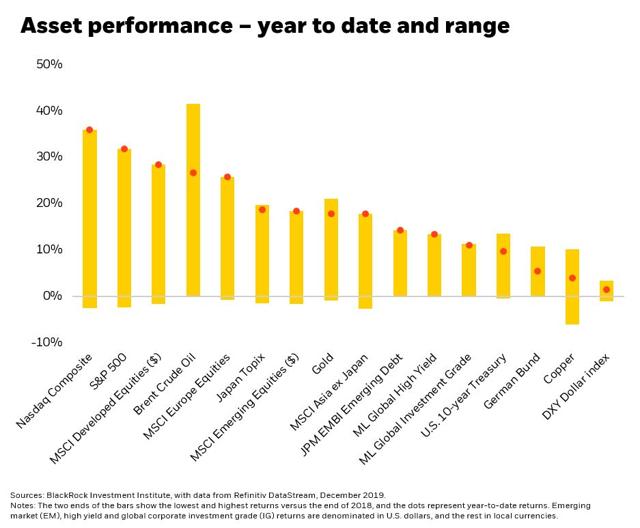 Next year is unlikely to be a repeat, but I don't expect a return to the challenges of 2018. Looking ahead to 2020, here are three predictions (hopes?) for the new year.

No recession, but also no boom

While recession fears were overblown in late 2018, there were legitimate issues facing the global economy. Today, two of the biggest have been resolved: monetary policy has pivoted from tightening to easing, and the U.S. and China have struck a temporary "trade truce". Both factors, along with a solid U.S. consumer and measured Chinese stimulus, should keep the global economy growing. That said, we're not on the cusp of a 1990s-style economic nirvana. The same secular headwinds that have inhibited growth, particularly an aging society, do not go away simply because the calendar turns. Demographic changes will still constrain the rate of growth in the labor force, keeping U.S. GDP at around 2%.

Modest growth contained inflation and a Federal Reserve on hold suggest range-bound interest rates. Recent comments from the Fed confirm that 2020 might be a year when the Fed sits on its hands. This should keep the short end of the yield curve anchored around current levels. On the long end of the curve, low but firm inflation and a recovering economy are likely to put modest upward pressure on rates. However, with growth still tepid and the demand for long-term bonds exceeding supply, the 10-year Treasury rate is likely to remain within its recent range, between 1.50% and 2.25%.

While stocks ripped in 2019, equities are not as extended as many would think. Since peaking in early 2018, the MSCI All Country World Index (ACWI) is up around 2%. Globally, valuations look reasonable and stocks should continue to benefit from the lagged impact of 2019's monetary stimulus. This suggests a decent year for stocks, although I don't expect a repeat of this year's bonanza. What may be more challenging for investors: how gains are distributed. December's momentum should carry into January, but from there, gains may become more elusive. A less-than-short, brutish and nasty U.S. election cycle may keep stocks range-bound for much of the spring and summer. In other words, January may account for a disproportionate amount of next year's gains.

Bottom line: While next year's market is unlikely to prove as profitable, the bull market should continue.

One caveat: The best part of the year may be over before Groundhog Day.

Russ Koesterich, CFA
3.44K Followers
Russ Koesterich, CFA, JD, Managing Director and portfolio manager for BlackRock’s Global Allocation Fund, is a member of the Global Allocation team within BlackRock's Multi-Asset Strategies Group. He serves as a member of BlackRock's Americas Executive Committee. Mr. Koesterich's service with the firm dates back to 2005, including his years with Barclays Global Investors (BGI), which merged with BlackRock in 2009. He joined the BlackRock Global Allocation team in 2016 as Head of Asset Allocation and was named a portfolio manager of the Fund in 2017. Previously, he was BlackRock's Global Chief Investment Strategist and Chairman of the Investment Committee for the Model Portfolio Solutions business, and formerly served as the Global Head of Investment Strategy for scientific active equities and as senior portfolio manager in the US Market Neutral Group. Prior to joining BGI, Mr. Koesterich was the Chief North American Strategist at State Street Bank and Trust. He began his investment career at Instinet Research Partners where he occupied several positions in research, including Director of Investment Strategy for both U.S. and European research, and Equity Analyst. He is a frequent contributor to financials news media and the author of two books, including his most recent "The Ten Trillion Dollar Gamble."Mr. Koesterich earned a BA in history from Brandeis University, a JD from Boston College and an MBA from Columbia University. He is a CFA Charterholder.
Follow
3 Comments