CES 2020 got rolling on Monday with massive displays being finished up and VIP previews. There also were quite a few expert panels that were getting people up to speed on what's coming to a future near you. I focused on artificial intelligence, or AI, on day one.

The development of AI is continuing as the convergence of data, neural networks and computing power help it improve everyday. Challenges remain and what people expect in the next two years might disappoint, despite the massive changes likely to occur in the next 10. 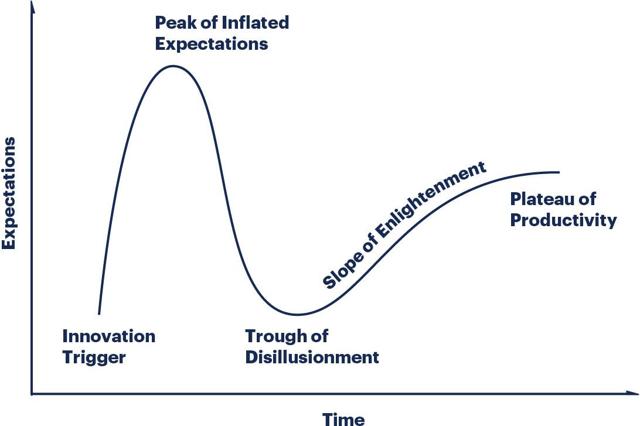 As investors, our job is to understand the hurdles and opportunities so that we can find investments with bright long terms that we might get a bit cheap in the short term (the Holy Grail of investing, buy low today, to sell higher tomorrow).

Today, I will look at several stocks that could outperform as AI becomes more entrenched in daily life. Along the way, I will drop in ideas that were discussed by the panelists at the Consumer Electronics Show.

Here are the three panels I attended for your reference:

The Global Economic Impact of AI

Myth and Reality in Today's AI

The short answer is everywhere. Artificial intelligence is moving into almost everything that can use a boost in productivity, efficiency or convenience. "Hey Siri," "OK Google" and "Alexa" are already in almost all of our lives.

For those who doubt the core importance of AI as the "smart everything world" develops, consider these points from a recent Forrester Insights survey:

Here's more. IDC expects 75% of companies will be using AI by 2022 - so, consider that train already down the track. Panelists at CES discussed how consumer experiences are continuing down the path of integration with AI. Computer vision, chatbots, AR and VR are just a part.

At CES, artificial intelligence is in almost every display. Smart homes, smart cities, medical diagnosis, autonomous driving, wearables, fintech, communications, gaming and on and on.

What To Ask About Investing In AI

It's important to ask the right questions for finding the AI-related investments that will make you money. Don't ask "which AI is best?"

Artificial intelligence is created for specific purposes. Each one is different. Ask which AIs will do, what they are designed for and as a result penetrate what market.

We need to not fall into the trap of glomming onto hype with AI. We should examine whether an AI will improve productivity, efficiency or human convenience.

As Samsung pointed out, we are rapidly entering an "age of experience" where we value our time and how we spend it more.

To the extent AI can help us find more time, whether by improving our health, making our work more productive or doing our chores, that's where AI will have value. Where AI has value, that's what will drive successful investments.

Here are several companies which are set to benefit as AI proliferates.

Alphabet has become an "AI first" company, according to CEO Sundar Pichai. You see it in their Gmail sorting and filtering, Google search, YouTube suggestions for what you might like to watch, Maps for helping you find your way, Photo sorting, Google Cloud and other services.

Alphabet has made the most purchases of AI firms across the industry, tallying at least 20 acquisitions in the past several years. AI is the core place that the company spends its cash hoard.

The company is leading on computer vision which gives it an edge, not only in transportation, but also in industrial applications.

Here's the kicker for investing in Alphabet. At some point, regulation is going to force the company's hand at spinning off companies. Alphabet is way ahead in that game as it restructured itself a few years back to be able to do just that.

When the spin offs occur, the "baby Googles" as I have been calling them, will have embedded AI solutions. That means the companies coming also will be leaders in AI due to the development time and money that the parent puts in.

Alphabet is one of the only "must own" stocks in the Margin of Safety Investing universe. The company is currently reasonably valued, spin-offs will unlock more value eventually and the stock is a buy on significant dips in price.

Is Big Blue getting ready to make a big comeback? I'm beginning to think so. Some of the brain power from IBM was on display at CES and I'm impressed.

I have been following IBM for more than 20 years now and only owned the stock once from just after the financial crisis to early 2014. The stock has been in a steady chop down since late 2014.

The company itself has seemed burdened by legacy and frankly been rather boring. I'm not bored anymore. Watson, their famous AI, is already solving healthcare problems. I think there's more though.

IBM is a competitor in the quantum computing space. While we are far away from quantum computing by definition. The progress is about to see massive leaps in computing power regardless. This will spur IBM's continuing AI development.

I have long wondered if IBM could find a way to challenge in the search space with Watson or another AI. I think that's coming. If IBM can address privacy issues better than say Google, I think they will get a foothold. An IBM panelist made several points regarding privacy, trust and transparency. I am encouraged.

IBM pays a good dividend to wait for it to continue adding to smart revenue. Already, IBM's Strategic Imperatives division, which includes data, security analytics, mobile, cloud computing (which all use AI) is now over 50% of IBM's revenues and it's growing.

Nvidia is the quintessential picks and shovels company for AI. In Silicon Valley and elsewhere, AI developers use Nvidia's platform for building. The company's GPU chips are the leader for AI and machine learning. I talked to several developers at CES and all were using Nvidia (small sample, but interesting nonetheless).

Nvidia is a leader in cloud GPU. It competes with Intel (INTC) in the cloud space and simply has faster chips. That has led to much faster growth for Nvidia.

The GPU-powered cloud, vital for edge computing, which will be driven by AIs, is growing rapidly due to being more efficient for cloud customers who have a high degree of variance of what they need at various times. The Nvidia GPU has the flexibility to deliver.

Where Nvidia also has an advantage is for "on site" AI. Not all artificial intelligence will be operated via the cloud. The emergence of "on site" AI will span millions and then billions of devices in time.

Samsung and several panelists discussed the nascent "on site" AI market. Smart homes will learn about you and adjust for you. Industrial applications will adjust on the fly. Wearables will do some thinking for your immediate benefit.

Here's the problem with Nvidia. After its own "crypto-crash" the stock has had a massive rebound. It's once again in nosebleed territory.

For patient investors, you will get a chance to buy Nvidia again. It's volatile enough that a pullback to around $200 per share is almost a certainty. I will look at it for potential purchase then.

The sex appeal of artificial intelligence is obvious. It's the hot thing, as well as being at the core of the "smart everything world." Don't fall for hype. Take the time to break down where the money will be made.

Don't overlook companies that simply benefit from AI. Industrial and commercial enterprises will use AI to become more efficient and grow.

Also, think of it like the disruption from the Internet. Who will get "Amazoned" this time? Who will benefit from using AI?

There will certainly be winners and losers. As one CES panelist pointed out, "tech benefits are not spread out evenly." Those who chose to adopt, and adopt well, do the best.

One thing I picked up on was a concept called "dynamic pricing." I've seen it with sports and concert tickets. Pay attention to that. While it's a way to generate more revenue, I think it can be perceived as gouging, which could generate push back from the government. Make sure revenue streams are secure in any case.

Also consider this. It was pointed out by a CES panelist "the jobs of tomorrow aren't invented yet," so don't fret so much at being replaced if you are willing to keep up. The biggest margins, by the way, were in replacing MBAs and other highly skilled folks, which I found interesting.

AI is in its third go around on the hype cycle. This new iteration appears to be ready for investment by patient investors. My simple advice, look around at what you use and know. Think about what could make it better. And then consider that an AI is thinking about it too.

The development of AI applications for virtually everything is going to proliferate over the next decade. The adoption of AI by businesses, both big and small, is going to drive adoption. In some of those spaces, large recurring revenues will happen. I'm specifically looking for those.

While Google, IBM and Nvidia are blue chips in the space, there are dozens of smaller companies that I think are poised for breakouts. I will cover a few in upcoming articles, though the best ideas will, as always, go to members of Margin of Safety Investing first and usually exclusively.

Follow and then contact Kirk Spano by direct message via his profile to receive your first year with Margin of Safety Investing for half price. Simply put "half price" in the subject line to get an offer sent to your profile settings.

Additional disclosure: I own Bluemound Asset Management, LLC, which is a fiduciary, fee-only Registered Investment Advisor. I publish separately from that entity for self-directed investors. See relevant terms and disclaimers at the website of Bluemound Asset Management, LLC. Any information, opinions, research or thoughts presented are not specific advice as I do not have full knowledge of your circumstances. All investors ought to take special care to consider risk, as all investments carry the potential for loss. Consulting an investment advisor might be in your best interest before proceeding on any trade or investment.