The Software Side of Life
4.17K Followers

Coming off a rather disappointing Q2, Smartsheet (NYSE:SMAR) reported a strong Q3 earnings and raised their FY20 guidance. The stock initially traded down ~5%; however, over the past few weeks, the stock recovered the loss and then some, now up ~5% since earnings. Initially, I thought the stock would be down a bit and it could present a good buying opportunity; however, investors continue to bid the name higher as there is a lot of confidence in the long-term growth.

Q3 revenue grew 53% which was better than expectations and remained consistent with Q2 revenue growth. Operating margins continue to remain weak at -29%, though billings growth of 52% was better than expected. The company continues to reinvest in their S&M and R&D, which is likely driving the strong revenue growth. In addition, the company's recent Fed RAMP authorization gives SMAR another avenue of potential revenue.

Management also raised their FY20 revenue guidance by ~$3.5 million at the midpoint, more than the ~$2 million revenue beat during Q3. However, valuation remains a bit excessive at ~18x forward revenue as investors are already baking in a few more years of strong revenue growth and execution.

While valuation remains at a premium level, I would wait until the stock drops below $40 before picking up some shares.

SMAR is one of the leading cloud platforms enabling more efficient work execution by helping employees plan, organize, manage, and automate their work tasks. Customers are able to access their accounts online via a web-based interface or through a mobile application. As businesses continue to grow and develop more complex data files, the need to properly store, organize, and manage these becomes all the more important.

SMAR has been able to rapidly grow revenues because of the underlying transition from on-premise methods of data organization to cloud-based applications. By moving these efforts to the cloud, customers have more optionality and flexibility in how they manage, organize, and present their data. In addition, the transition to the cloud means customers will spend less on internal infrastructure building and more on third-party application providers, such as SMAR. This trend is likely to continue, and as companies continue to grow in size, complexity, and global reach, SMAR's TAM will expand with additional revenue following.

For Q3, SMAR reported another strong quarter of revenue growth, which came in at 53% to $71.5 million and was above expectations for ~$70 million. It's impressive how consistent revenue has been so far this year, with 55% growth in Q1 and 53% growth in Q2. Even as the company approaches a $300+ million run-rate in revenue, there are still plenty of growth opportunities remaining. SMAR continues to expand their market share, and after recent receiving their Fed RAMP authorization, they now have better access and ability to sell directly to the US government. This optionality opens up another potentially meaningful and sticky revenue source.

Just as important, billings growth remains impressive and grew 52% during the quarter, similar to the 52% growth last quarter and above expectations for ~48% growth. Billings growth is a great indicator of future revenue growth, and given the continued strength in billings, SMAR is poised to continue their ~50% revenue growth for some time.

One other important metric investors follow is net revenue retention, which came in at 134% during the quarter. This metric demonstrates the company's ability to sell additional products to existing customers, essentially focusing on up-selling products to their existing customer base. 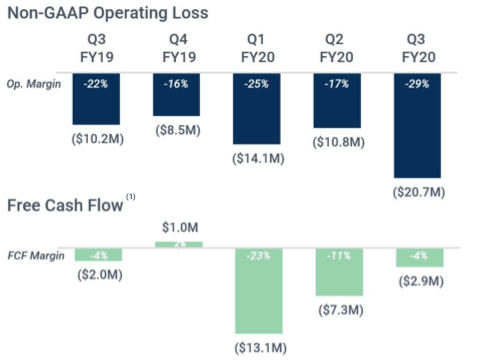 SMAR is still in a position where they are afforded the flexibility of having negative operating margins as the company invests in both S&M and R&D in order to gain scale and rapidly grow their revenue base. Once the company starts to see their revenue growth decelerate to a more stable longer-term growth rate, the company will be able to leverage their scale and quickly expand margins.

Despite the lower operating margins, the better than expected revenue led to an EPS loss of $0.15 during the quarter, slightly better than the expectations for a $0.18 loss. 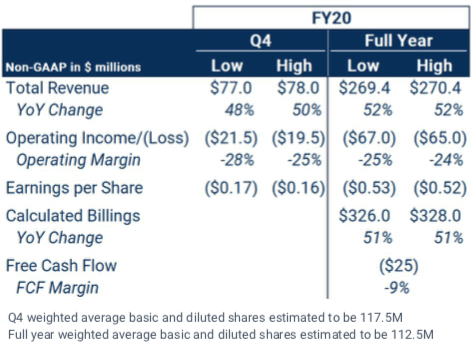 Q4 guidance includes revenue of $77-78 million, which was slightly above consensus expectations for ~$76 million. The 48-50% growth rate expectation is also slightly below the 53% growth seen the past two quarters. With operating margin expected to be -25-28%, the company is still several years away from reaching an operating profit.

For the FY20, management raised revenue guidance by ~$3.5 million at the midpoint, to $269.4-270.4 million, up from $265-269 million. The ~$3.5 million raise was also slightly more than the ~$2 million beat in Q3, implying the company continues to see strength in the core business, potentially from their recent Fed RAMP authorization. FY20 revenue growth is expected to be ~52% for the full year, which could be a little conservative considering management's history of beating and raising expectations.

Valuation for SMAR continues to be challenging given the extreme premium. The stock currently trades at ~18x forward revenue, which is rather expensive even for a stock growing revenue 50%+. While some companies can achieve this high of a valuation with 50%+ revenue growth, SMAR's weak operating margins and lack of FCF present more of a risk.

After lowering their operating margin guidance after Q2, the stock traded down ~30% at the low point, which was likely necessary in order to reflect the company's revenue multiple contracting. Even with revenue guidance remaining ~52% for FY20, the company's current valuation makes it difficult to get comfortable starting a position in the name.

SMAR has a current market cap of ~$5.4 billion, and with ~$550 million of cash/investments and no debt, the company has a current enterprise value of ~$4.9 billion. Management's current FY20 revenue guidance of $269.4-270.4 million implies revenue growth of 52% for the full year. While this could be a little conservative, the company's strong growth rate is the support for their premium valuation.

If we assume revenue growth slowly decelerates next year, at even 50% growth, this would result in FY21 revenue of ~$405 million, representing a ~12x forward revenue. Taking this a step further, if revenue were to decelerate to only 45% in FY22, this could result in ~$590 million in revenue, or an ~8x FY22 revenue.

When looking two full years out, an ~8x multiple does not seem too expensive; however, this assumes only a small amount of revenue deceleration even as the revenue base continues to get bigger. Another thing investors will start to focus on is operating profitability. With operating margins expected to be -25-28% for FY20, the company could still be a few years about before turning a profit. FCF remains negative, though they could start breaking even in the upcoming quarters.

Risks to SMAR include revenue growth or operating margin missing guidance, which could send the shares down a lot. Companies with fast revenue growth tend to trade poorly if they miss expectations. While I believe revenue growth expectations are slightly conservative, if they were to miss, we could see shares trade down quite a bit.

The Software Side of Life
4.17K Followers
Individual investor with hands-on experience in the equity markets. Largely focusing on Tech companies or major mispricings in the market.
Follow