There is a strong demand for palladium from the automobile industry.

Platinum is the key commodity for automobile and jewellery.

Gold is treated as a great indicator for platinum and palladium investors.

Invbots team believes that palladium will remain bullish in 2020. While platinum will stay positive in the short term, it faces downward pressure from 2020 onwards. Investors can consider taking long positions on both precious metals in the short term. This article will present the rationale of our prediction on both precious metals and explain their correlations with gold and S&P 500.

Palladium is a platinum-group lustrous precious metal which has a strong demand from the automobile industry. Currently, around 85% of palladium is deployed in the exhaust systems in cars, facilitating the transformation of toxic pollutants into less harmful carbon dioxide and water vapour. Other uses of palladium include electronics, dentistry, and jewellery. 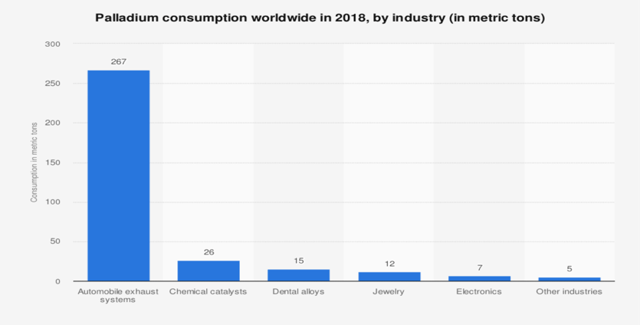 Palladium’s supply is relatively concentrated because it is mined mostly in Russia and South Africa (Fig.2). As palladium is also mostly extracted as a secondary product from projects which focus on other metals including platinum or nickel, its output can often lag behind the price rise. The estimated deficit drives palladium prices to successive records.

Fig.2: Russia and South Africa accounted for 74% of palladium global production in 2018

Palladium's fundamental shortage will support its prices and drive its price higher. Firstly, palladium’s demand is expected to grow continuously due to its expanding usage in the automobile industry. While the market worries about a weakening global car sale, particularly the decline in China, it can be countered by higher PGM loadings (Fig.3-4) given stringent emissions regulations. Secondly, the supply of palladium remains constrained. Based on the PGM Market report in May 2019, the primary palladium supplies are likely to remain flat, with “modest releases from pipeline inventories from South African producers.” UBS October 30th report also remarks the constrained room of expansion in primary production of palladium given the lack of Capex previously, and potential projects also look unlikely in the near future. Inventory-wise, while Norilsk Global Palladium Fund (GPF) has supplied the market from “previously unavailable sources” in the past 3 years (Norilsk), the inventory remaining is unknown. Overall, we observe an obvious deficit that is likely to sustain in the short term.

Fig.3: Rising use of palladium in automobile production 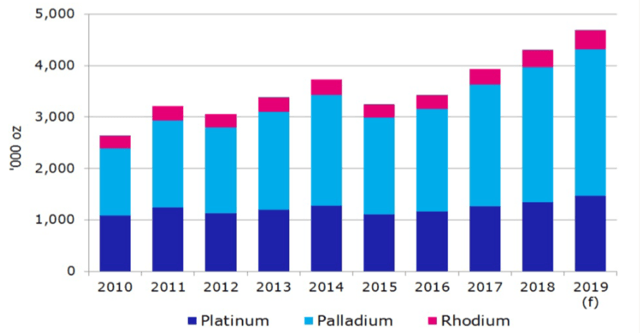 Fig.4: Rising use of palladium in autocatalyst counters decline in auto-sales 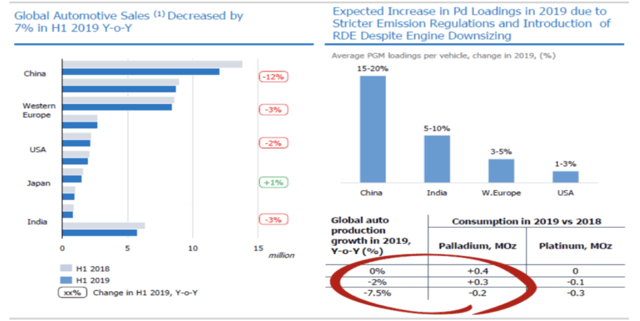 Fig.5: An overall obvious deficit that is likely to sustain in the short term 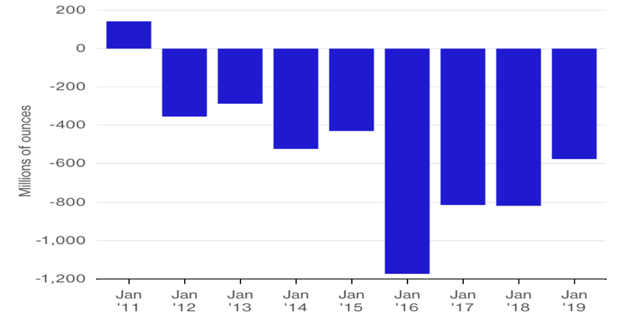 As compared to platinum price, palladium price is more correlated with equities due to a larger exposure to the automobile sector and the economic cycle (Fig.6-7). This means that any concern over the weakening global economy (i.e., declining automobile sales) and economic uncertainty (i.e., trade tensions) will push down the palladium price from time to time. Such a downward adjustment helps to maintain palladium price within a reasonable range. However, this does not impact the general upside of palladium-based on the above-mentioned fundamental factors. 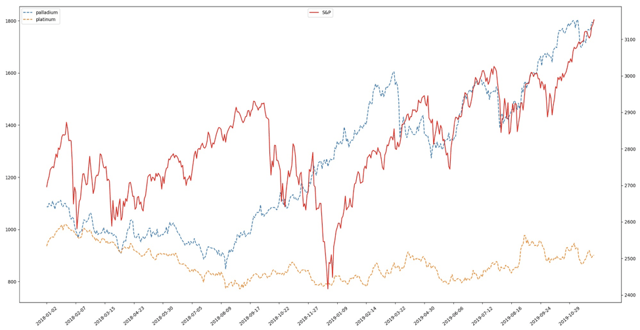 An all-time-high palladium price can attract temporary short positions but the real risk remains as global economic performances. The fundamental market tightness suggests that investors cannot hold a short position for a very long time. UBS September Report indicates that gross shorts at that moment are low at only 25%. Therefore, our team believes that there is a small room for speculation and remains bullish on palladium.

Platinum – a key commodity for Automobile and jewellery

Platinum is a precious metal widely used in the automotive industry and designer jewellery. Platinum's wear and tarnish resistance characteristics are well suited as fine jewellery. It is resistant to chemical attack, high-temperature environment, and is stable in terms of electrical properties. Other uses (Fig.8) include medical machinery electrodes such as those in oxygen sensors and parts of turbine engines. The following illustrates how the overall trend of platinum is determined based on an analysis of demand and supply.

Fig.8: Automobile is the largest sector for platinum consumption in 2019, followed by Jewellery whereas investment demand increased from 0% in 2018 to around 14% in 2019.

A UBS report published in early November points out that platinum inflows suggest investor interest. High platinum ETF holdings (Fig.9) reflect investors’ optimism about demand growth potential and constrained supply. The Platinum:Gold ratio (Fig.10) is hovering near the highs reached in September, which means there is potential for gold to drag the whole complex higher due to relatively strong correlation between gold and platinum. 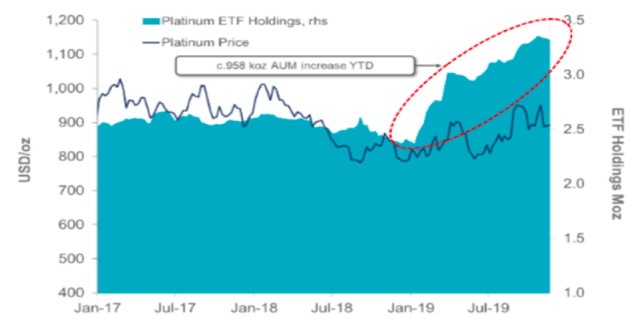 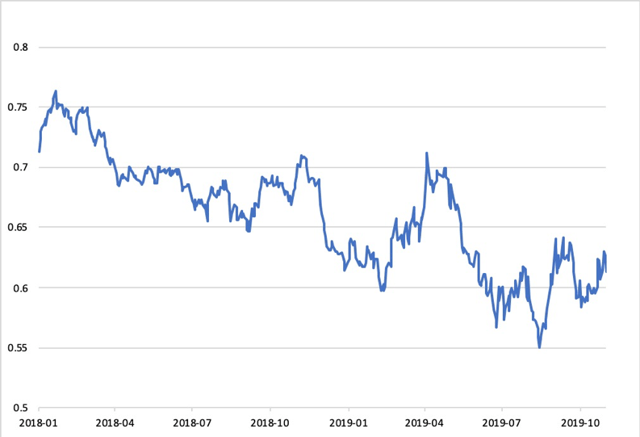 There is still upside potential for platinum in 2019 due to a deficit but the price of platinum will probably drop in 2020 owing to a surplus. Based on the World Platinum Investment Council Q3 report, the updated 2019 forecast reflects a deficit of 30 koz compared to the prior estimation of a surplus of 345 koz. A strong increase in investment demand also seems to offset lower automotive and jewellery demand compared to 2018. Overall, total demand (Fig.12) in 2019 is forecasted to increase by 12% over 2018 while total supply is expected to be 2% higher than that in 2018, with an increase in both mining supply and recycling. However, it is anticipated that platinum will witness a market surplus of 670 koz in 2020 with a 1% decrease in supply and a 10% decrease in demand.

In the long term, fundamentals of platinum remain weak. According to a UBS report, auto and jewellery sectors, which account for 70% of total platinum consumption, remain weak. Decreasing platinum demand from the auto sector is expected, given the weak global car sales. Also, a notable decline in premium on the Shanghai Gold Exchange reveals a weaker platinum jewellery demand. As for the supply, SWOT analysis reveals that Zimbabwe, the world’s third-largest platinum-group metal deposits, has announced an estimated 2.79 million ounces output by 2024, which almost triples the amount of the current output. Therefore, we observe that platinum will remain in surplus in the long term. 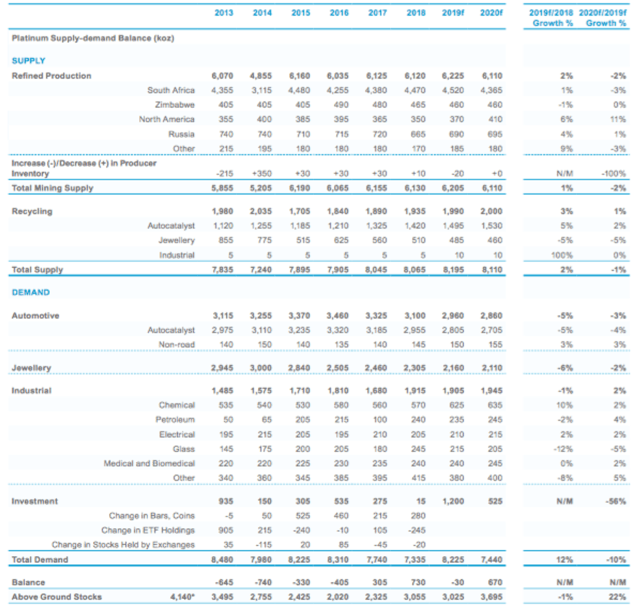 An automotive industry rebound may be a key catalyst for palladium and platinum prices. In the auto industry, palladium is considered as a lower-cost substitute for platinum. According to the U.S. Geological Survey (USGS), palladium has been substituting platinum in most gasoline-engine catalytic converters because of the historically lower price for palladium relative to that of platinum. Also, about 25% of palladium can routinely be substituted for platinum in diesel catalytic converters; the proportion can be as high as 50% in certain applications.

The global automotive demand for platinum is predicted to reach 2,960 koz in 2019, down 5% from 3,100 koz in 2018. IHS Markit Global Sector PMI published in November 2019 (Fig.13) also shows that global output of automobiles and parts will continue to decline in October, extending the current downturn to just over a year. Therefore, a rebound of global output of automobiles and parts will probably raise the prices of both metals because of an increase in demand.

Fig.13: Global PMI is a leading indicator of Global output of automobiles and parts

Prices of palladium and platinum are interchanging

It is noted that the prices of these two metals are interrelated. Palladium market has jumped recently, with the cost of palladium exceeding that of platinum. USGS points out that the annual average price of palladium (Fig.14) in 2018 has increased by 13% compared with that of 2017 while the average annual price of platinum was 5% lower than that of 2017. Since October 2017, the average price of palladium has been higher than that of platinum, which had not been the case previously since 2001. Due to the high price, sustained demand growth and limited supply growth of palladium, material platinum demand may then increase to replace the use of palladium in gasoline cars. Thus, automotive demand for platinum may increase as a result of the substitution of palladium in gasoline and diesel car emissions control.

Fig.14: Average monthly prices of palladium becomes higher than that of platinum

Fig.15 Reserves of palladium and platinum declined in 2018 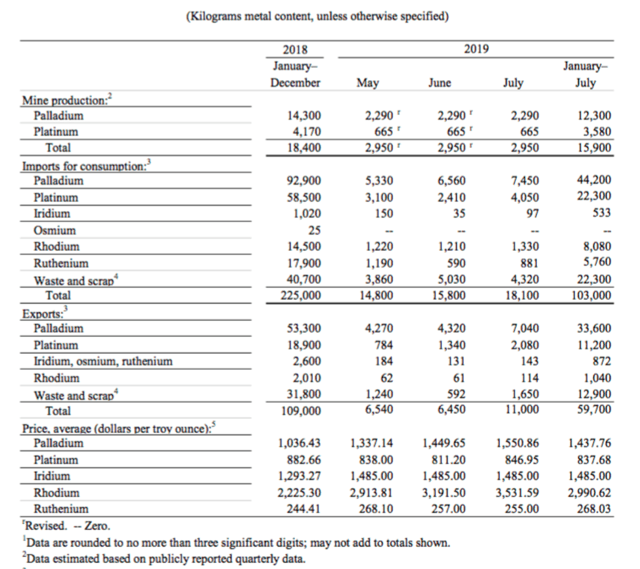 Gold as a great indicator for platinum & palladium investors

The correlation between gold and platinum as well as gold and palladium can be proved by static and Dynamic Pearson coefficients. 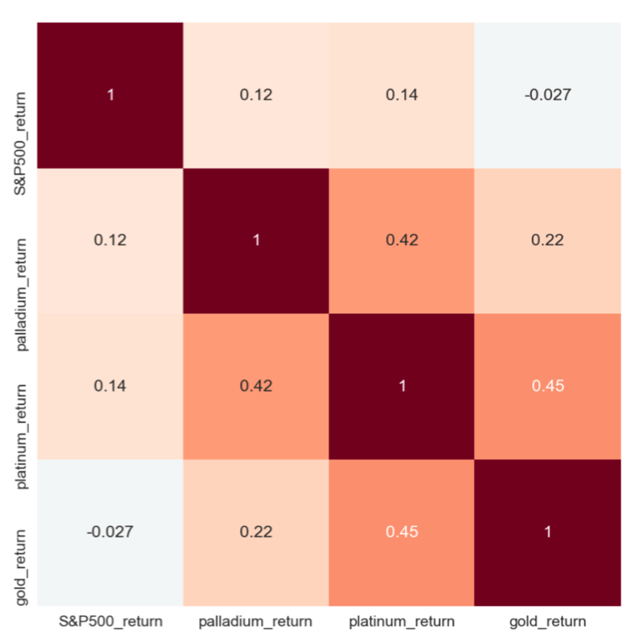 Fig.20: Equity Market is less useful in monitoring returns on platinum and palladium

Above considered, Invbots team predicts that palladium will remain bullish albeit having a choppy upward trend; meanwhile, downward pressure on platinum is expected from 2020 onwards due to a surplus. Our quantitative analysis has also proved that gold, platinum, and palladium have relatively high correlations, both static and dynamic basis. Palladium and platinum investors should monitor gold prices as risk management measures. In a nutshell, investors can consider taking long positions on both precious metals in the short term. Meanwhile, investors are advised to closely monitor the macro-economic performances including various production and consumption data, trade talk progresses, and a pullback in equities from the highs.

Follow InvestBots Limited and get email alerts
+
Add a comment
Disagree with this article? Submit your own.
To report a factual error in this article, click here.
Your feedback matters to us!