Wirth not surprised by muted market reaction to Iranian assassination.

He believes that the oil market is and will continue to be well-supplied.

Chevron believes its stockholders are most interested in dividends.

The company believes there is plenty of growth left in oil.

It has a three-pronged approach to address ESG investors.

Chevron Corporation (CVX) CEO Michael Wirth was interviewed at the Goldman Sachs energy conference in Miami on January 7th. Wirth was asked if he was surprised that the price of oil did not jump more than it did based on the assassination of Iranian Major General Soleimani. He said “not really.” He explained how oil prices reverted to pre-attack levels after the disruption to Saudi oil in September. 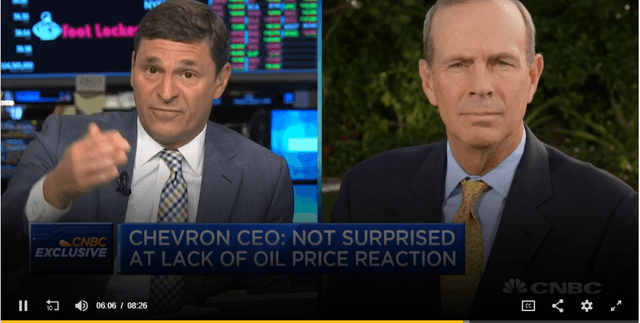 He went on to say that we are in a pretty well-supplied market and expect that will continue. The incident last week did not involve energy infrastructure or alter the supply-demand dynamics.

Wirth said Chevron has not changed its estimates of future oil prices based on the incident or even the OPEC decision for 2020 production. He explained that those are the kinds of things the company sees in this business and looks to the long-term view of price that drives investment.

Chevron recently announced it would be writing down almost $11 billion in assets. The reason is lower oil and gas price expectations in the future.

Wirth was asked by Jim Cramer as to what Chevron does when Big Oil has no more growth. 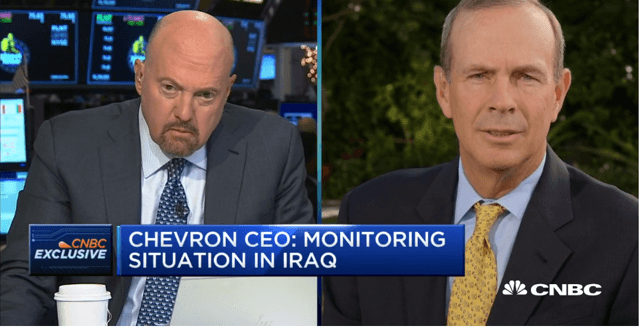 He answered saying there are 6.5 billion people in the world today. In twenty years, there will be 9 billion. So, the world will need 30 percent more energy in all forms.

Even when you get to a point where demand begins to plateau, you need to replace the oil being depleted. There is a long future when demand is growing and then plateauing to need cleaner energy.

A question not asked and answered concerns the replacement of electrical generation by renewables and the use of EVs, which could reduce world transportation fuel demand by 35 percent, according to a long-term study by Paribas.

Wirth was asked whether Chevron will increase its investments next year if oil prices remain at current prices, given that each additional dollar of oil price revenue translates into $450 million of free cash flow for the company. He said it would probably not. The dividend is the most important thing to people who own Chevron stock. The company has increased dividends every year for 32 consecutive years. And he would expect that to continue.

Mr. Wirth was asked how Chevron plans to address ESG-minded (Environmental, Social, and Governance) investors. He said Chevron could compete with any company in the “S” and “G.” About the “E,” it is climate change issues.

In that regard, Chevron has three strategies:

On Chevron’s website, there is more information about this topic.

I wrote an article about the impact of the killing of a major Iranian political figure. And my conclusion was similar to Mr. Wirth’s. We would have to see an impact on supply for there to be a lasting price impact.

I also share his view that the oil market is well-supplied. I published my model’s price outlook given future inventory levels in that same article.

I do not think his answers about the long-term viability of Chevron’s strategy or about ESG investors were strong though. For example, Brookfield Energy Partners (BEP) has a more credible strategy, in my opinion, as I discussed in a recent article.

But his interview was more credible than the one of Harold Hamm, chairman of Continental Resources (CLR). He said oil prices were headed to $75 within six months due to tightening of supplies. Major forecasters, such as the IEA, EIA and OPEC, show supplies exceeding demand in the first six months of 2020, even with new OPEC+ cuts.