Gold just had its best year since 2010, while the precious metal was also negatively correlated with equities.

As a result a simple 50/50 equities and gold portfolio would have beaten the S&P 500 on a risk-adjusted basis.

Both fixed income and equity markets are still not functioning as they are supposed to, thus continuing to provide tailwinds for gold in 2020. 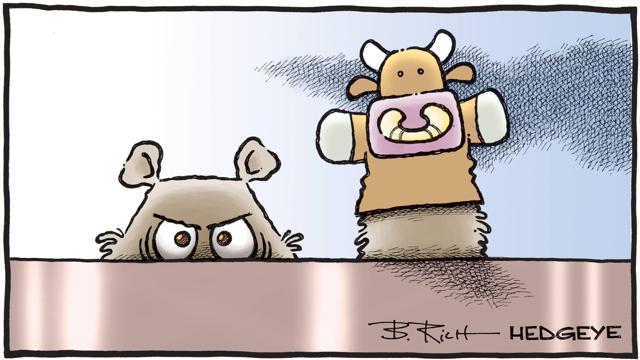 Gold is the only asset you can have that’s not somebody else’s liability.

Not only a good year for equities

2019 was a very good year, not only for equities but for gold as well. During the year the precious metal returned around 18% which marked the best annual performance since 2010. 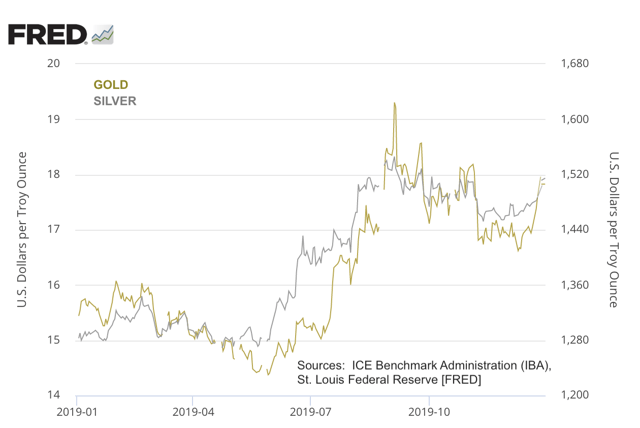 Also in 2019 I started writing analyses on why I consider gold to be an asset class that deserves more attention by investors.

Back in February 2019 I wrote my first article on why I see gold as an attractive investment. The analysis focused more on the risk of record high valuations in the stock market and the plethora of deteriorating macroeconomic indicators.

In July, I took a more long-term view on the precious metal and showed how its price moved in unison with the overall risk of the financial system. During the same month one of the most famous fund managers - Ray Dalio, also favored some exposure to gold, as the risk of shift in existing paradigm increased.

Finally in December of last year, I wrote a piece providing a link between changes in the Leading Economic Index (LEI), the stock market and gold. The analysis revolved around the thesis that the highly politicized stock market returns and the subsequent mini cycles in LEI also affect gold prices.

If you haven't done so, I encourage you to go back and read each of the three analyses as each one of them provides a standalone thesis on why the precious metal is a good addition to any portfolio given the current macroeconomic, political and monetary environment.

Quite often after such a run in the price of gold and a major political event like the increased tensions between the U.S. and Iran, many news channels start to report the increase in gold price through the lenses of "safe haven" demand.

Headlines, such as the one above, suggest that gold as an asset is primarily driven by political events and as such is primarily held by investors preparing for doomsday like scenario.

Not only do I believe that this is utterly wrong, but it is also misleading as to what are the real drivers behind the gold price.

Gold price and the economic cycle

In my last analysis, I described how the 3 mini cycles (and the potential fourth one) in YOY change in LEI since 2009 relate to equity, bond and gold prices. 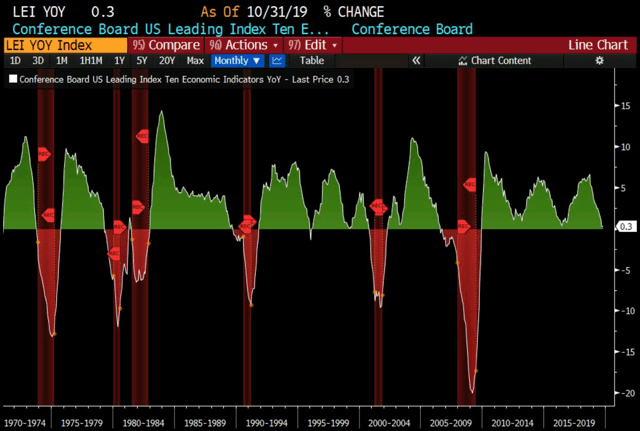 Within that context, with every consecutive mini cycle correlation between equities and gold has been falling to a lower level, signaling that the extraordinary monetary and fiscal stimulus are starting to unnerve many investors.

This could also be seen on the graph below.

*correlation of daily returns over the past one year period

As we progress toward a potential fourth mini cycle in LEI, investors grow more and more skeptical of whether monetary and fiscal easing are able to continue to support the current bull market in equities. A bull market that continued to roar over the course of 2019 with a staggering 29% return.

Not only did Ray Dalio recently started favoring some exposure to gold, but Didier Saint-Georges, a managing director at French fund house Carmignac, also suggests that gold could be one of asset classes that investors put more weight into to counter equity risk:

On the other hand, more people start to ask whether bonds would offer a good protection against equity risk over the coming years. As yields remain at all time lows, the upside in fixed income is limited.

At the same time correlation between fixed income and equities just recently turned positive which would make the classic equities/bonds portfolio sub optimal. 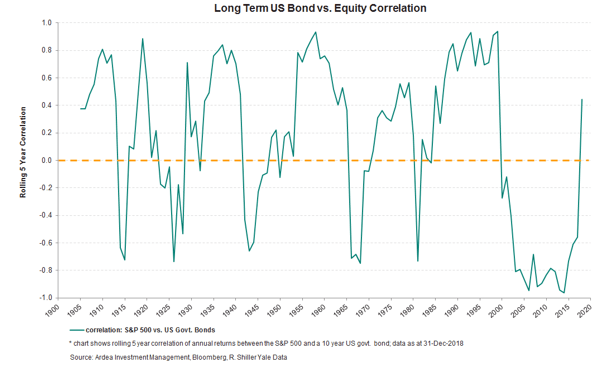 Contrary to government bonds, as we saw above, correlation between gold and equities have recently gone negative, which makes the precious metal a very good hedge against equity risk.

*correlation of daily returns over one year period

Therefore a simple 50/50 equity and gold portfolio in 2019 would have beaten the S&P 500 on a risk adjusted basis.

Although 50% exposure to gold is excessive in my opinion, the example above shows that at least a small exposure to the precious metal is warranted.

Why my outlook for gold remains unchanged

As I outlined in one of my previous articles, over the long-term the price of the precious metal depends heavily on the trust in the existing monetary system. This trust seems to be slowly diminishing as interest rates remain close to zero.

Misallocation of capital, risks for the pension system, excessive risk taking and zombie banks are just number risks exacerbated by the zero interest-rate policy (ZIRP). All these risks explain why the price of gold is correlated with the total amount of negative-yield debt. 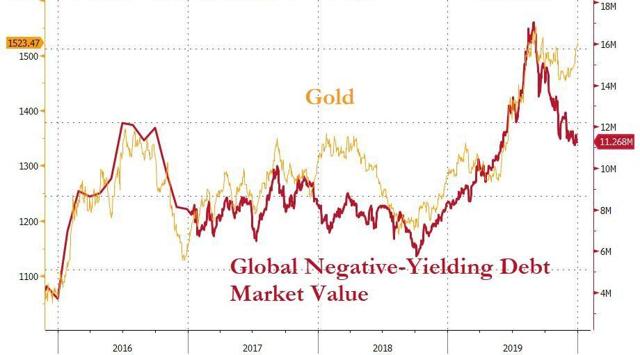 Alongside the bond market, the equity market also showing signs of misallocation of capital.

To start with, operating profitability of S&P 500 companies has been at its highest levels since 1990s. 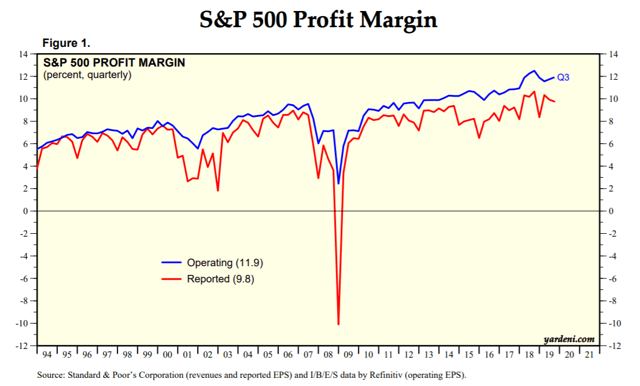 While at the same time total amount of capital expenditures has not increased materially. 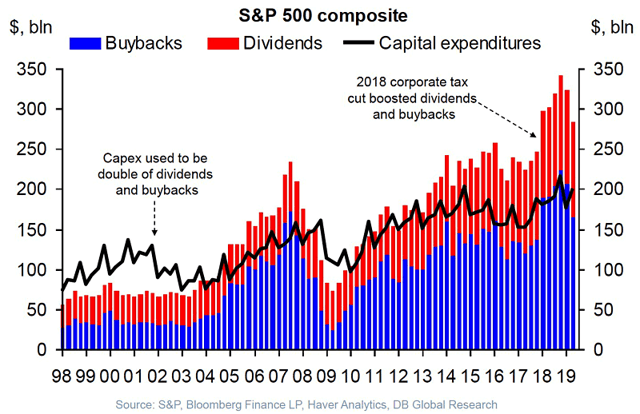 Employees have not benefited from the improved profitability either, which is one of the reasons why inflation has been limited to financial assets only. 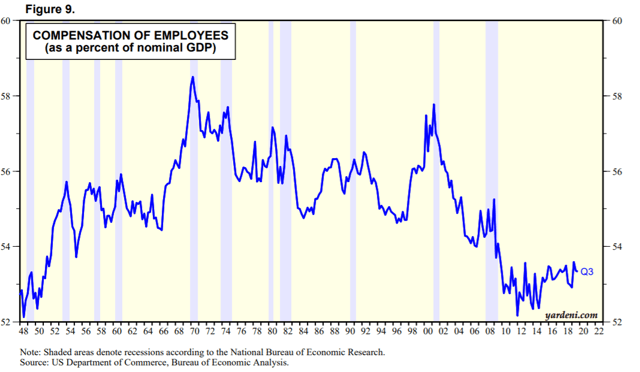 So on one hand we have operating profitability at all time high, while capital expenditures and compensation of employees failing to catch up. Instead of flowing through the real economy, profits have been increasingly used for buybacks.

As a matter of fact, the ratio of buybacks plus dividends to operating earnings is once again approaching 100%. 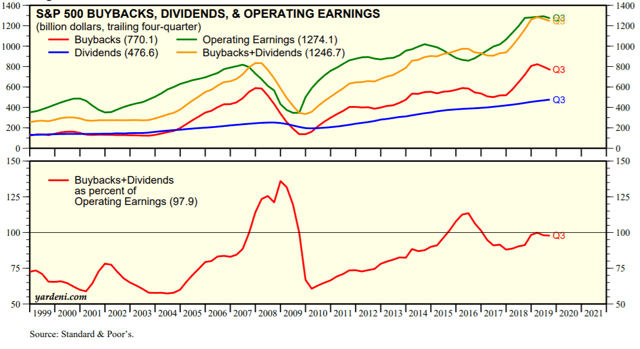 If nearly 100% of operating profits are being used for buybacks and dividends, then it should come as no surprise that debt burden has been increasing to support capital expenditures. 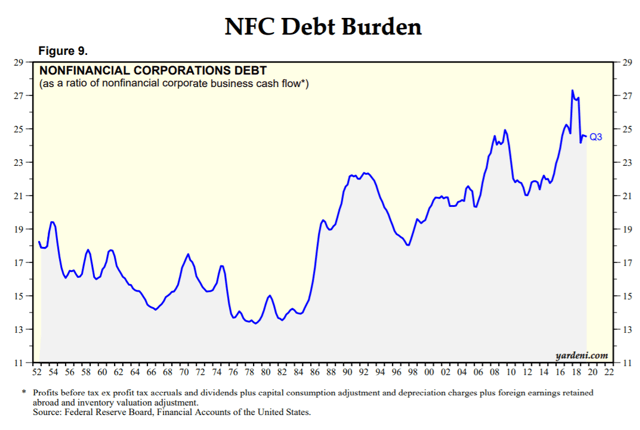 At the same time valuations within the index continued to increase, with five-year consensus expected long-term earnings growth falling sharply while forward P/E bouncing off the low levels of 2018. 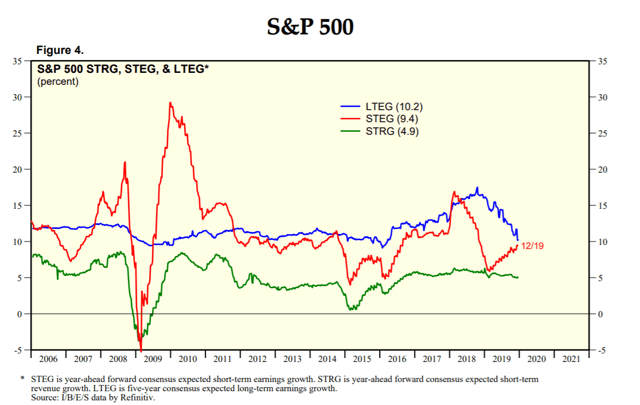 All that has caused the S&P 500 PEG Ratio to spike, reaching its highest levels for the past 30 years. 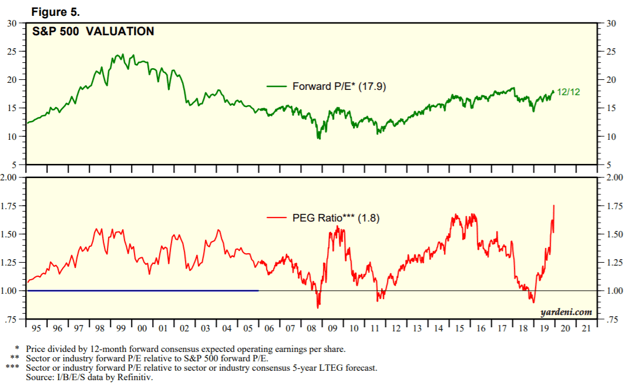 Having said that, investor sentiment has also been very optimistic of late. 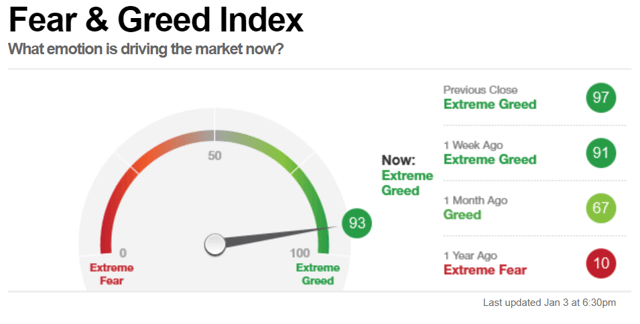 In a nutshell, both stock and bond markets are not working efficiently, thus bringing a number of systemic risks. On top of that valuations continue to gravitate around the extreme levels, while investors sentiment is very optimistic. In such an environment tailwinds for the price of gold are likely to continue in 2020.

Follow Vladimir Dimitrov, CFA and get email alerts
+
Add a comment
Disagree with this article? Submit your own.
To report a factual error in this article, click here.
Your feedback matters to us!