With R&D expenses rising, the global pharma industry is increasingly relying on data analytics for speedier and cost-effective clinical trials. The new approach has the backing of the FDA, which recently approved new therapies based on the real-world data. The global tech giants are shaking up the industry competition with their technical and financial prowess. The large bio-pharma players have already taken note of the trend, snapping up clinical data providers at lofty multiples.

However, IQVIA Holdings Inc. (IQV), a firm offering contract research services backed by data insights, has slumped ~3% over the last six months, compared to the ~9% gain in the S&P 500 index. Hamstrung by debt, its top-line growth and margins remain stagnant. More pressure on revenue is likely due to rising sector competition and M&A activity. Even though the promising industry prospects justify IQV’s current premium in the trading multiples compared to the past, we believe the weak financials should continue to hold back the company valuation in the near-term.

A Business Model For the Future

With an ever-rigorous FDA approval process (the U.S. Food and Drug Administration), the clinical development for global pharmaceutical companies is not getting any easier. According to CB Insights, the clinical trials for drugs can take up to 7.5 years, costing $2B on average for the developer. Amid weakening company financials due to pricing pressure from the generics and regulatory muscle-flexing, the expensive drug approval process could severely restrict the funding for drug development leading to their delay or complete termination. Hence the need for faster commercialization of drugs through a more efficient, cost-effective, and speedier approach to clinical trials.

This is where the use of data analytics is gaining value. A vast amount of data is being generated by the healthcare industry through a variety of sources such as prescriptions, medical claims, and electronic medical records. There is a growing need to integrate and restructure that data to draw insights for a range of uses, including the design of effective clinical trials. For example, the real-world evidence studies can identify adverse events unobserved in clinical trials, and longitudinal studies can spot the patients likely to have the best response to a particular treatment. Therefore, according to experts, the data analytics could eliminate the need for a control arm, or in the case of label expansions, even the full clinical trial. The significant savings to the industry in terms of cost and time are thus fueling the growth of the industry.

The new trend hasn’t gone unnoticed by the big pharma. A few years ago, Roche Holding AG (OTCQX:RHHBY) needed faster clinical development of its drug candidates, as its key cancer treatments were reaching expiry. That’s when it acquired Flatiron Health and Foundation Medicine, Inc, in 2018. The company expected to speed up its clinical trials through the oncology-specific data from the electronic health records of the former and the genomic profiling assays of the latter. Meanwhile, even the FDA has greenlighted the use of data analytics in clinical trials. Ibrance, a breast cancer drug by Pfizer Inc. (PFE), initially indicated only for female cancer patients, was approved for males in April 2019 supported by the real-world evidence.

The attempts to combine the data and clinical development is not new. In 2016, Quintiles Transnational Holdings Inc., merged with IMS Health Holdings, Inc., creating an entity later known as IQVIA Holdings. Leveraging the data analytics offered by IMS Health, a company providing sales and market research at the time, Quintiles expected efficiency gains to speed up and lessen the cost of the contract research it undertakes. Despite its newly-developed tools such as IQVIA CORE™ platform that speeds up the trial conduct through data-powered site selection and patient enrollment, the combined entity, burdened by debt, is yet to accelerate the revenue growth and expand margins.

IQV is organized into three segments: data analytics, contract research, and sales consultancy. The contract research function leads the revenue generation, followed by the data analytics with an average contribution of ~53% and ~39%, respectively, during 2017-18. The average LTM (last twelve months) revenue growth of both segments have slowed in the last four quarters by a percentage point each from ~7% YoY (year-over-year) and ~12% YoY recorded in 2018, respectively. Even though the sales consultancy business accelerated the average LTM revenue growth to ~6% YoY from ~-11% YoY in 2018, it made up only ~9% of the total sales during 2017-18. Therefore, from ~7% YoY in 2018, the overall LTM revenue growth has declined to ~6% YoY on average in the last four quarters, leading to a similar management guidance for the top-line for the full year 2019 on a reported-basis at the mid-point.

Further pressure on revenue growth is likely as tech giants in Silicon Valley enters the healthcare data analytics business tapping into low-cost data through cutting edge technology. Verily Life Sciences, a unit of Alphabet Inc. (GOOG) collects real-time health data from prospective clinical trial participants and others through its Study Watch, a wearable device tailor-made for clinical trials. Meanwhile, Amgen Inc. (AMGN) uses the artificial intelligence services offered by Google and Amazon.com, Inc. (AMZN) to improve its clinical trial planning through the analyses of past trial data. Aside from the direct competition, it will be increasingly difficult for IQV to form such partnerships to achieve growth as formidable competitors with sizable recruitment budgets poach its tech talent.

Meanwhile, the largest driver to margins, the analytics segment, saw its LTM segment margins narrowing to ~24% from ~25% in 2018 even though the margins of the research segment held steady at ~21% from 2018. Therefore, the average LTM operating margin for the company remained stagnant at ~8% unchanged from 2018. However, in our view, further pressure on margins is likely amid rising competition and industry consolidation.

With the healthcare sector leading the M&A activity for 2019, the trend, if continued into 2020, could limit the number of clients for IQV and increase the bargaining power of the remaining few, pressuring the company margins further. Meanwhile, even the small-scale acquisitions required to broaden the talent pool and neutralize competition is unfeasible for IQV due to its high leverage and restrictive debt covenants. As of Q3 2019 (third quarter of 2019), the leverage remains elevated with net debt to EBITDA ratio at ~5.4x, up from ~4.1x in Q1 2017. However, there are no immediate liquidity concerns as major debt repayments are not due until 2023, even though the levered free cash flow has declined for three consecutive quarters. 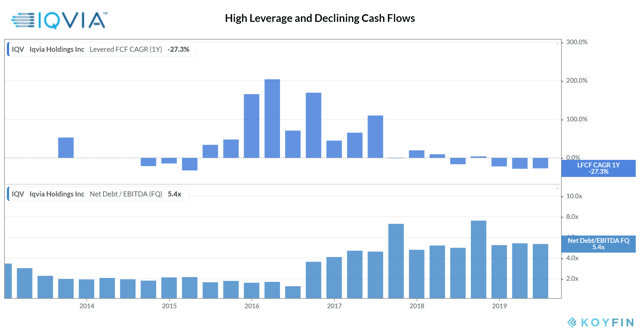 With a premium of more than ~26% to the median over the last six years, IQV currently trades at ~24.2x of its 2019 earnings, the highest since mid-2019. The LTM EV to sales ratio stands at ~3.8x, a premium of ~26% to the median ratio. Even though, the promising nature of the industry warrants a further premium, the weak financials of IQV justifies the current valuation in our view. When Roche acquired Foundation Medicine valuing the company at ~$5.3B, its LTM EV to sales ratio implied ~29.5x, based on LTM revenue of ~$179.4M. However, the top-line of the company had more than doubled in the quarter immediately prior to the acquisition.

The ability of IQV to withstand newly emerging risks related to the data privacy and security is another concern given its weak fundamentals. In 2018, the Cambridge Analytica scandal had wiped off ~$36B of market cap from Facebook, Inc. (FB) overnight, nearly 20% of IQV’s current market value. With clinical information being far more sensitive than digital data, the impact on IQV’s bottom-line and market cap in the event of a breach will be significant. Meanwhile, the rising M&A activity in the healthcare sector could be a double-edged sword to the discerning investor as IQV with its attractive business model could become an acquisition target given its depressed valuation.

Driven by the need for cost-efficient and speedier clinical trials, the industry for healthcare data analytics looks promising. The FDA approves drugs based on real-world data, while the big pharma snaps up firms providing data insights at rich multiples. Even though the industry is only taking off, the debt-heavy IQV is unable to reap the benefits. Its revenue growth and margins remain stagnant as the leading tech giants with deep pockets enter the fray. Already trading with a steep premium to the median forward PE ratio over the past six years, in our view, IQV is appropriately priced as its weak financials offset the strong growth prospects in the industry.

Dulan Lokuwithana
1.52K Followers
A research analyst with CFA (US) Level I & II qualifications, and CIMA (UK) full qualification, Dulan primarily covers Health-care and Restaurant Stocks for Seeking Alpha. A Graduate in Human Biology, Dulan's expertise in the industry refines his Health-care analysis, and the sheer passion in cuisines spices up the Restaurant sector coverage. With a focus on medium to long-term investment horizon, Dulan hopes to uncover investment opportunities in mid-cap to large-cap stocks less well covered by the analysts.
Follow