Apache Corp. announced a discovery offshore Suriname block 58, which is adjacent to the prolific Stabroek block. A few weeks after creating a 50/50 JV with Total SA.

The company needed some good news on the production front after the scare experienced in December.

It seems that the stock over-reacted and reached an overbought situation. I recommend taking some profit starting $36.80. Some retracement will occur soon, in my opinion. 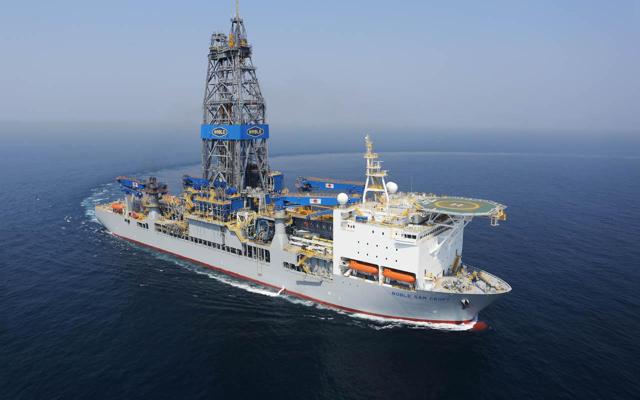 The Houston-based Apache Corp. (NYSE:APA) is an independent oil and gas producer operating in three different regions and has earned $635 million in consolidated operating cash flow from operations during the third quarter of 2019.

The company has been struggling for years mainly due to its Permian Basin natural gas asset called Alpine High and a lousy natural gas price that forced the company to curtail production and redirect CapEx to better oil-producing segments in Q3'19.

Apache's shareholders have been suffering from an outperforming stock as long as I can remember, but like a broken clock right twice a day, the company has started to pay off for the ones who did not give up.

However, the investment thesis is not as simple as it seems to be. Yes, the recent Suriname news is fascinating, but it will take many years and a large amount of CapEx to turn this exciting news into cash flow. The market reaction seems triggered by a short-covering activity and an emotional response.

If you are not sure about that, I recommend reading my recent article about the Stabroek block in Guyana operated by Exxon Mobil (NYSE:XOM), which has produced its first oil from Liza phase 1.

Based on this discovery, the stock presents a better profile as a long-term investment perspective. However, the recent stock appreciation bolstered by a shaky Middle East situation has turned APA into an overbought condition from a lagging oversold one, in a matter of hours. In short, I do not think it is time to invest in APA at the moment.

However, it will happen eventually when fair value is decided. Meanwhile, I recommend trading short term the stock.

Little details about the company

The US Shale, and particularly the Permian Basin, continues to drive the company's growth with remarkable results.

However, continued weakness in natural gas prices forced the company to revise its outlook.

Natural gas prices are a stinging issue for the company that was forced to lower its production guidance by 5% from the previous projection.

Alpine High play is a definite concern, considering the meager prices of the commodity prevailing at the Waha Hub in West Texas. Apache's reduced drilling activity in Alpine High and postponing some fourth-quarter completions into the next year pushed the company to reduce the Permian Basin crude production to around 100+k Boe/d. 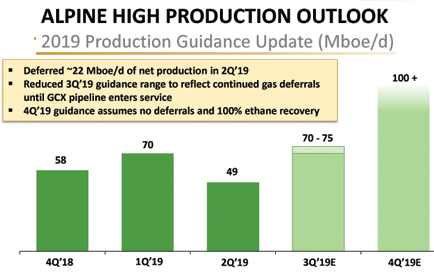 Apache has invested massively in its Alpine High prospect, which is a Permian gas play that is not as attractive as a pure oil Permian play due to pricing issues.

Note: When evaluating a Permian producer or a shale producer like APA, investors must look thoroughly at the global quarterly oil production called oil equivalent. No need to enter complicated rhetoric that could cloud the simplicity of the investing equation.

A shale well produces light oil and natural gas in general. The oil producer can also provide some natural gas liquid or NGL. The combination of those three is indicated as barrel of oil equivalent.

However, the more oil in the mix produced, the better for the company. Unfortunately, for APA, it is not encouraging with Alpine High as an active contributor who received an average natural gas of $1.66 per Mcf in 3Q'19. In 3Q 2019, the Permian Basin recorded an output of 254.4k Boe/d, representing 56.45% of the overall oil and gas production.

Oil represented only 37% of the total Permian Basin output in the third quarter. With the prices below, you can understand quickly why natural gas is a drag for revenues.

The Suriname block 58 is adjacent to the Exxon Mobil's Stabroek block.

John J. Christmann, the CEO, said in the conference call:

Turning to Suriname, we have retained the Nobel Sam Croft drill the second and third wells on Block 58 in 2020, with an option still outstanding on a fourth well. We are planning to drill these wells at a 100%, but that might change should we choose the farm down our interest.

However, since the conference call at the end of October, Apache announced on December 22, 2019, that:

[J]oint venture agreement to explore and develop Block 58 offshore Suriname. Under the terms of the agreement, Apache and Total will each hold a 50 percent working interest in Block 58, which comprises approximately 1.4 million acres in water depths ranging from less than 100 meters to more than 2,100 meters. Apache will operate the first three exploration wells in the block, including the Maka Central-1 well, and subsequently transfer operatorship to Total.

The Noble's Sam Croft drillship will drill the next wells in Block 58, commencing with the Sapakara West prospect. Sapakara West-1, located approximately 12 miles southeast of the Maka Central discovery.

It was a good sigh of relief for the company and its shareholders. Oil quality seems similar to what Exxon Mobil encountered in the Stabroek block in Guyana and presents no trace of sulfur so far.

On November 13, 2019, Tullow Oil (OTCPK:TUWLF) announced disappointing news about its Carapa-1 well with a smaller reservoir and presence of sulfur in the more shallow Orinduik and Kanuku blocks.

As always, I end my article with technical analysis (short term)

APA experienced an unusual break out of its descending channel pattern resistance at around $26.50.

When news of this amplitude hits the wire, it is nearly impossible to rationalize the immediate consequence of such a report. We know that the discovery is very encouraging because the discovery tends to demonstrate that block 58 is a simple extension of the Stabroek block and should be as prolific.

In general, the stock experiences an exceptional stock increase the first day, followed by a few more days of "higher low." In general, three is the rule, but it can change depending on the oil prices situation. I guess that the stock will reach a high of around $35.80-36.00, at which point I recommend selling about 40-50% of your APA position gradually. We should expect some retracement soon.

Assuming a new ascending channel pattern at $36, I see further support at $32, but it is considering no lousy news and oil prices remaining firm. In case of bearish oil prices in the next few weeks, APA may drop to $28.25, where I see strong support.

Thus, watch oil prices like a hawk and keep an eye on the Iranian side of the puzzle.

Follow Fun Trading and get email alerts
+
Add a comment
Disagree with this article? Submit your own.
To report a factual error in this article, click here.
Your feedback matters to us!