Commodity Trading Advisor programs gained about 5% on the average in 2019 after several years of sluggish performance and amid a growing dilemma: increase exposure to stock market and lose some or all of the convexity of returns or preserve traditional diversification in commodities and outperform equities in next bear market?

The problem is that no one knows when the next bear market will occur. In 2008, the S&P 500 fell about 39% but CTAs gained 13.5% on the average according to BarclayHedge. Therefore, a well-diversified investment in CTA programs could have offered stock market left tail risk hedge in 2008.

Last year, according to BarclayHedge, CTAs gained 5.06% on the average while top 20 CTAs (BTOP50), most of which are systematic trend-followers, gained 6.7%, as shown in the performance chart below. 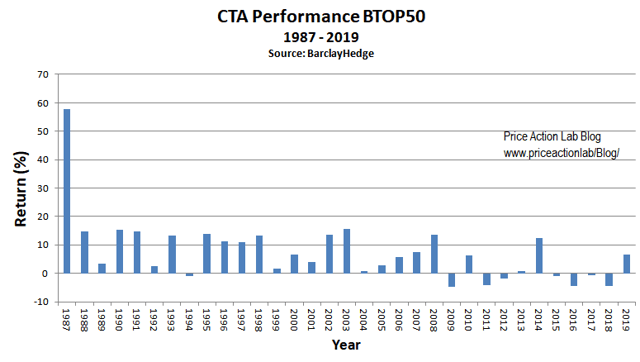 Annualized return of the top 20 CTAs since 2009 is about 0.3% versus 8% for S&P 500 total return (NYSEARCA:SPY). Quantitative easing and share buybacks have boosted stock market returns and increased inflows to passive index funds and ETPs at the expense of tactical investing, including CTA trend-following and other strategies. In addition, despite the sluggish performance, CTA space remains crowded. These problems were discussed in this article. The question is as follows: has CTA returns convexity diminished or will it return in next bear market? Below is a related chart. 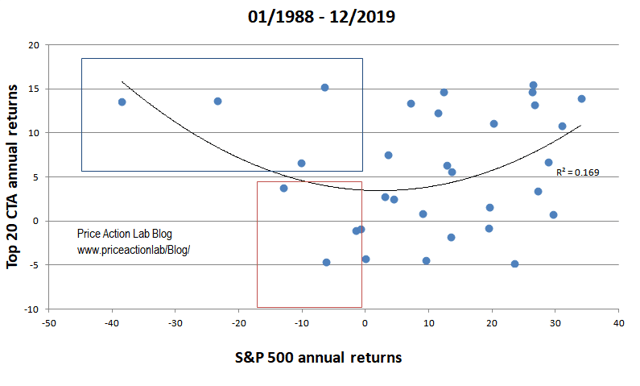 The chart above shows how annual S&P 500 returns versus top 20 CTA returns are related. The Blue rectangle indicates the convexity property of the past when CTAs would generate relatively high returns while equity markets were in bear mode. But the red rectangle indicates that recently this convexity property is under some stress. In simpler words, CTA performance has fallen in years the stock market was down and that occurred in 2011, 2015 and 2018.

It could be that this loss of convexity in recent years is a random phenomenon and CTAs will be able to recover in the next bear market. However, if they are tempted to increase correlation to equities, then convexity may disappear. CTAs know that and many investors in them are sophisticated and understand that these programs are not so much for chasing absolute alpha but for equity market tail risk hedge.

Performance of CTA programs in the next bear market will not only be interesting but may also determine the future of this asset class.

Follow Michael Harris and get email alerts
+
Add a comment
Disagree with this article? Submit your own.
To report a factual error in this article, click here.
Your feedback matters to us!