DXC Technology (NYSE:DXC) is facing significant headwinds in the secular decline of roughly 73% of its business. While it is working to rapidly grow in other areas, the jury is still out if it can arrest its revenue decline. New management has put together a credible strategy, but there are high execution risks. DXC's valuation is low, but it just reflects investors' concern for the secular headwind. Two key things DXC investors should watch for: (1) if the rate of decline of 73% of the business is consistent with management's assumption of a high single-digit decline rate, and (2) if management can achieve the aggressive growth rate of the rest of the business to achieve its revenue target. I investigated DXC's business because of its low valuation, but have decided to not invest in DXC because of the secular headwind.

DXC was formed in April 2017 when Computer Science Corporation merged with the spin-off of the Enterprise Service segment of Hewlett Packard Enterprise (HPE). DXC is in the business of providing information technology "IT" services to its customers. In May 2018, DXC spun off its Public Sector segment to form Perspecta (PRSP). DXC acquired Molina Medicaid Solutions in October 2018. In 2019, DXC completed seven acquisitions to complement its Microsoft Dynamics and ServiceNow offerings and to provide opportunities for future growth. In June 2019, DXC acquired Luxoff to help its growth in the digital area.

Revenue has been on a secular decline

DXC's TTM revenue is roughly $20.2B with adj EBIT of roughly $2.85B. However, management is guiding FY2020 to be in the range of $19.5B to $19.8B. Adj EBIT margin is 14.1%. Adj EBIT excludes the following expenses: restructuring cost, transaction, separation and integration-related cost, amortization expense related to acquired intangible assets, pension and OPEB actuarial and settlement gain and loss.

DXC's revenue has been on a declining trend. Its booking trend is on a decline as well, pointing to a continued revenue decline in the near term. This is shown in Figure 1. 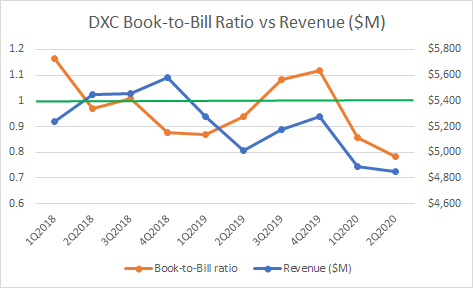 The book-to-bill ratio has declined more sharply recently because of execution issues with contracts within some key accounts, resulting in customers' hold on further work. Beyond the execution issues, this decline can be well understood when one understands the business mix of DXC. DXC's business mix is shown in Figure 2. 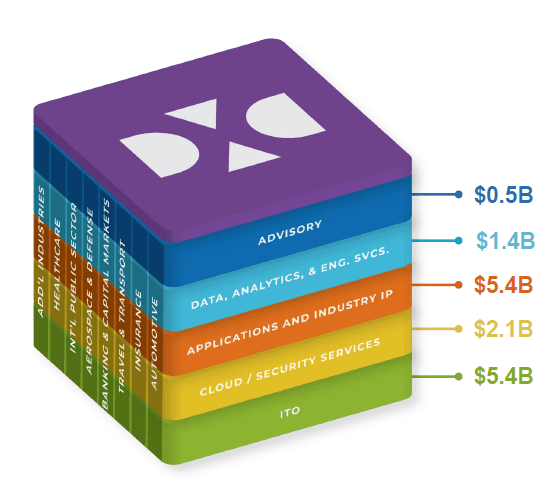 Figure 2: DXC's service mix. Source: 2Q2020 earnings release presentation. Note that the revenue figures shown are net of the revenue of the three businesses where DXC is pursuing strategic alternatives (more on this later).

Note that the two largest services (ITO and Applications and Industry IP) combined represent about 73% of overall revenue. Both services have seen decline and are expected to be on a secular decline trend. The decline is driven by the transition of IT services to the cloud. Once the data is stored in the cloud, applications that were on legacy systems will move with the data as well. There is no disagreement on the secular decline trend. The issue is how steep will the decline trend be. Management is guiding to a high single-digit rate of decline.

With 73% of its revenue on a secular decline trend, DXC brought on an IT industry veteran, Mr. Mike Salvino, as its CEO in September 2019. Mr. Salvino wasted no time to put together a go-forward strategy, which is outlined during the 2Q2020 earnings release CC and its accompanying presentation. The strategy page is attached as Figure 3. 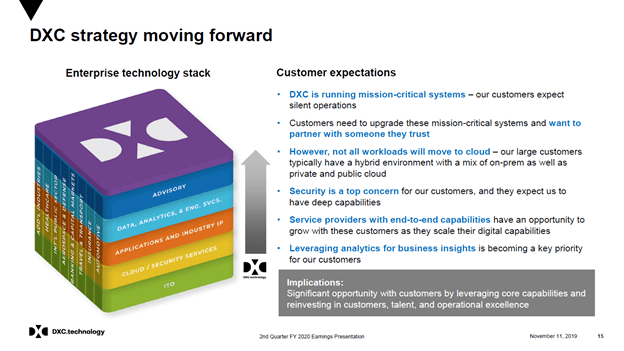 At its core, the strategy is to position DXC as the integrated IT service solution provider for its customers, leveraging DXC's industry expertise in several verticals: automotive, insurance, travel and transportation, banking and capital market, aerospace and defense, international public sector and health care. Former management had decided to de-emphasize the ITO business as it is a declining business with lower margin while emphasizing growth in digital. However, given the size of the ITO business in DXC, it was not a prudent strategy. Mr. Salvino believes that while the ITO business is declining, it is not going away in the mid-term. Being in the ITO business builds client relationship and may enable DXC to bid on other services within the ITO client base. In addition, former management viewed its legacy business and digital as two separate businesses, whereas to a customer, digital and ITO are all part of the IT services that it needs. It makes sense to approach the customer as an integrated provider of IT services, providing services within the technology stack. As such, the go-forward strategy has the right customer-centric focus.

Figure 4 shows management's targets for results in FY2020 and FY2022. The most important item is a $15B+ target for revenue in FY2022. If DXC can hit the revenue target, the profitability targets will likely be achieved. 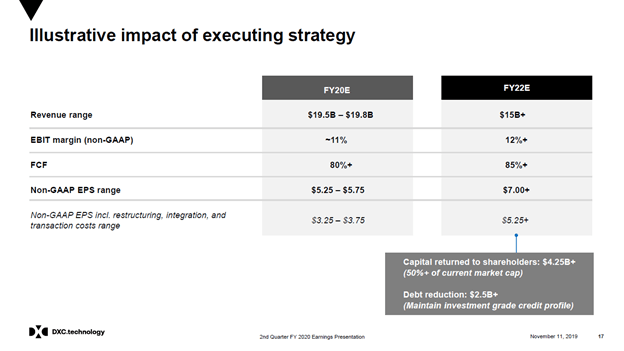 Figure 4: Targets for results in FY2022 for the successful execution of the go-forward strategy. Source: 2Q2020 earnings release presentation.

In order to understand the critical assumptions of management for the $15B+ target, I have done some modeling to arrive at a $15B revenue in FY2022. The results of the model are shown in Table 1.

Table 1: Model of the growth rate of various services within the technology stack to achieve a $15B revenue target in FY2022. Source: Author's model based on management's various commentaries.

There are several things to note from Table 1. The two largest service segments (ITO and Applications and Industry IP) together represent 73% of total revenue and they are in secular decline. Management is expecting the decline rate to be high single-digit. I have modeled an 8.5% decline rate. The digital services are within Data, analytics and Engineering services and I have modeled that layer to grow at a 30% rate, which is consistent with the growth of digital. However, it is likely that not all services within that layer are digital. Hence, a 30% assumption may be aggressive. I have modeled Cloud/security services to grow at 20%, which is consistent with the growth of cloud-based services. Lastly, while this model shows a $15B revenue in FY2022, it also shows that revenue in FY2021 to be flat/slightly down from FY2020. Management has not provided any guidance for FY2021. The implication is that DXC will tread water for the next five to six quarters. Revenue will likely continue to decline before it stabilizes if it stabilizes.

There are execution risks and some risks are beyond DXC's control

The biggest risk is the secular decline of the two largest service segments. Management's underlying assumption is that transition of IT data and services to the cloud will result in a high single-digit rate of decline. Any acceleration of cloud-based transition will cause its revenue to decline faster than DXC can make up in the growth of digital and cloud/security services. Furthermore, this cloud-transition is beyond the control of management.

While digital is fast-growing, its growth rate may moderate. Competition will likely be fierce as every service provider will focus on this growth service segment. In addition, digital services are not the forte of DXC even though it has acquired companies such as Luxoff to beef up its capability and it may continue to do such acquisitions. With the decline of legacy services, there will be excess people available from these legacy service segments. The challenge is to retrain these people and re-deploy them to new growth technology areas. This is usually easier said than done. There may be continued higher cost as DXC makes the skill transition.

While a focus on key accounts and selling an integrated service are the right thing to do, management acknowledged that DXC's account management and sales capabilities need to be beefed up. While this action is well within DXC's control, building these capabilities takes time and increases expense while results will not show immediately.

There have been execution issues in the delivery of services to major customers, which had led to higher cost and delay in bookings of additional work. Management is focusing on improvement. After Mr. Salvino joined DXC, he has hired five key senior executives to focus on various areas for internal improvement. All these areas are within management's control. While there are execution risks and getting improvements may take time, these improvements will probably eventually be implemented.

DXC's valuation is low compared to that of its peers. This is shown in Table 2. I have chosen as DXC's peers Perspecta and Cognizant Technology (CTSH).

The biggest concern that is driving a low valuation is the secular decline of 73% of DXC's business. I believe investors are concerned that despite management's best effort to transition to higher growth service areas, DXC cannot overcome the secular headwind. I believe that betting on DXC now is a bet that the decline rate of its legacy business is no higher than a high single-digit rate and that DXC can grow rapidly in the high growth areas such as digital. Clearly, the jury is still out on both counts.

DXC does have many attractive financial attributes. It generates ample FCF. It is using its FCF to buy back shares, pay dividend and make acquisitions. It has an investment grade debt rating. The selling of the three non-core businesses will bring in roughly $5B, which will provide more flexibility.

DXC is making a difficult transition from its declining legacy businesses to higher growth businesses. The new CEO, Mr. Salvino, has put together a credible strategy to execute this transition. DXC can likely overcome its several internal execution and organizational issues. However, the biggest challenge is the secular decline of its legacy business which is about 73% of its revenue. Unfortunately, the industry headwind caused by the transition to the cloud, which is causing the decline of its legacy business, is beyond management's control. DXC's valuation is low because of investors' concerns about this headwind. I will stay away from DXC for this reason.

Long-Term Business Investor
1.89K Followers
30+ years of trading part time, managing my own money. Value investor. I focus on the industry, business strategy and management execution, rather than the stock price and market trends. I have a long term (3 to 5 year) investment horizon. My research is done to guide my own investment decisions. I look at many companies, conduct detailed research on a few, and invest in those where my research shows compelling value within my investment horizon. I share my research on SA to gain feedback to sharpen my research and logic, and also to discover potential blind-spots.
Follow

Additional disclosure: All investments have many risks and can lose principal in the short and long term. The information provided is for information purposes only and can be wrong. By reading this you agree, understand and accept that you take upon yourself all responsibility for all of your investment decisions and to do your own work and hold the author harmless.