Shrinking U.S. stockpiles, OPEC production cuts and a drop in the rig count to nearly a 3-year low have combined to paint a bullish backdrop for crude oil going forward. In this report, we’ll discuss some of the fundamental reasons why oil prices are likely to trend higher through 2020.

For several months last year, crude oil prices hovered below $60/barrel, mainly due to lower global demand. Uncertainties pertaining to the trade war, plus a slowdown in several emerging economies, put a damper on crude oil demand. Traders were starting to wonder if the demand picture would ever improve, and many expected an all-out trade war to erupt by 2020.

The negative energy sector outlook took a sharp turn in the fourth quarter of 2019, however, when trade tensions between China and the U.S. were alleviated. The announced tariff truce between both nations immediately put downward pressure on the U.S. dollar, in turn bolstering commodity prices in general. In the last few months, investors have turned away from the safety of the greenback and have shown greater interest in riskier assets, including oil, in light of the improved global trade and manufacturing outlook.

Since launching a new rally in October, the WTI crude oil price (below) has made it all the way back up to its peak levels from April 24, 2019. The April 24 high represents a key “resistance” level which technical traders will be closely eyeing in the coming weeks.

Oil prices have rallied over 20% since the October low, so it would make sense for the oil price to pause and consolidate its gains from here before attempting a breakout above the $63.68 level. The sharp pullback on January 8, which happened after President Trump said that he would embrace diplomacy to avoid a war with Iran, was a needed "correction" to the rapid increase in the oil price. However, it hasn't yet compromised oil's intermediate-term rising trend. 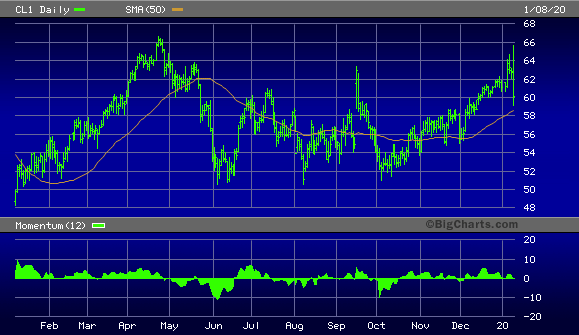 The question many traders are asking right now is, “Will future gains in the oil price be limited by supply factors?” In view of the current supply backdrop for the petroleum market, that question can be answered in the negative. One key consideration in the global supply picture is the recent spate of OPEC cuts. According to a Reuters survey, OPEC oil output declined in December as Nigeria and Iraq - which had lagged in their 2019 OPEC pledges - kept their latest production cut promises. Top producer Saudi Arabia also reduced its output in December. Reuters reports:

On average, the 14-member Organization of the Petroleum Exporting Countries pumped 29.50 million barrels per day (bpd) last month, according to the survey. That is down 50,000 bpd from November’s revised figure.”

OPEC-led supply reductions, along with the latest increase in tensions between the U.S. and the Middle East, will act to support oil prices in the weeks ahead while oil consolidates its recent gains.

On the domestic front, the number of rigs drilling for oil and natural gas in the U.S. has declined. U.S. rig count was lately reported at just under 800, which amounts to the lowest number since March 2017, according to the Houston Chronicle.

The Chronicle further reports that the drilling rig count has fallen by approximately 25% since the start of 2019 and is down 58% from its peak of 1,609 in October 2014 - just prior to the energy sector crash of 2015. Texas accounts for more than half the nation’s total rig count.

Along with rig count, oil stockpiles are also in decline. Reuters reported on January 6 that U.S. stockpiles fell for a fourth consecutive week last week. The average estimate of six analysts was for crude oil stocks to have declined by 3.6 million barrels in the week ending January 3, according to Reuters. U.S. crude inventories were at their lowest level in two months as of early January.

On the demand front, Bloomberg reports that hedge funds are pouring money into Brent crude oil futures, which is partly responsible for the recent price increases. The momentum trade in the oil market among hedge funds and institutional money managers cannot be underestimated, for it has the potential to push crude prices well into the fourth quarter based on the amount of money flowing into the market. Below is a graph which illustrates just how strongly committed hedge funds are to the oil bull market. 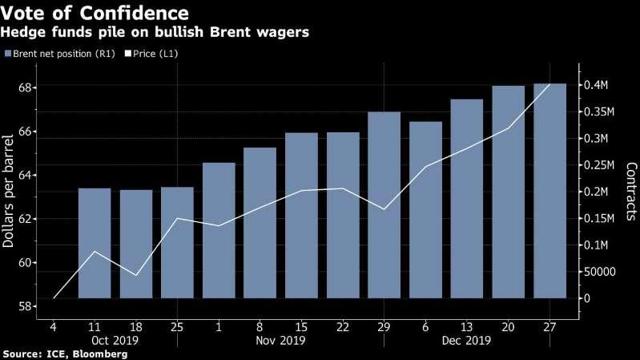 A final consideration in our examination of the crude oil outlook is the U.S. dollar index (DXY). Oil’s currency component is unquestionably supportive of higher crude prices. The persistently strong dollar of 2019 held oil prices back for much of that year. However, since the breakdown and continued weakness in the dollar index beginning last October, oil prices have encountered no difficulty in moving higher.

While some analysts and traders contend that the dollar/oil price relationship has weakened in recent years, the historically negative relation between both still stands. While oil prices may not be perfectly inversely correlated to the dollar, because crude oil is priced in dollars globally, the dollar’s strength or weakness will always have an impact on prices. Dollar weakness diminishes the amount of money producers get paid for oil, in turn putting upward pressure on oil prices. A weaker dollar always eventually lifts oil prices. Shown below is the Invesco DB USD Bullish ETF (UUP), which underscores the extent of the dollar's intermediate-term weakness. 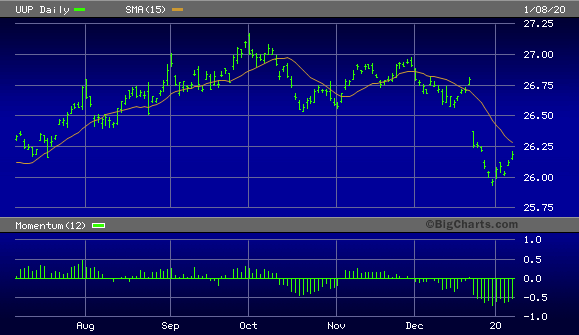 Another factor which supports rising oil prices is the diminution of trade war fears. With the signing of a “Phase One” trade deal between the U.S. and China tentatively scheduled for January 15, global equity investors have breathed a collective sigh of relief and have been snapping up bargains in emerging market equities. This is of some interest for oil traders, since there is a long-term positive correlation between emerging markets and crude prices.

Since many emerging nations are heavy exporters of oil, whatever bodes well for their economies is sure to benefit the equity markets of those countries. That emerging market stocks have rebounded strongly in recent months in the wake of the improved global trade outlook can't be denied.

Below is a graph of the iShares MSCI Emerging Markets ETF (EEM), my favorite emerging markets proxy, which has established a multi-month rising trend. The trend in EEM suggests that forward-looking investors anticipate a more positive outlook for the emerging nations in 2020 compared to last year. This, in turn, bodes well for crude oil demand as it pertains to manufacturing and global transportation uses. 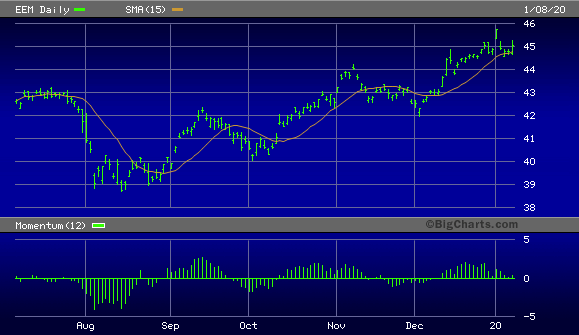 There is, however, a potential challenge to the bullish thesis for crude oil prices in 2020. The biggest risk to the bull's case for the petroleum market as I've outlined here is the threat of military conflagration in the Middle East this year. While the latest outbreak in tensions between the U.S. and Iran appears to be de-escalating, the threat of military action in the intermediate-term future still exists and is being actively discussed in the mainstream press.

A further caveat is in order. Due to the risks involved in the crude oil futures market, I recommend that traders use a conservative stop-loss to protect short-term trading positions. The benchmark I'm using right now is the 50-day moving average in the crude oil price (shown in the oil graph earlier in this report). If the oil price closes decisively below the 50-day MA on a weekly basis, a prudent exit to the sidelines is recommended until all subsequent selling pressure ceases.

To summarize, crude oil prices have continued upside potential in the intermediate-term (3-6 month) outlook, thanks to a confluence of supporting fundamental factors. OPEC production cuts, along with declining U.S. stockpiles and rig counts, will support rising prices in the months ahead. A more sanguine global trade outlook and a weaker U.S. dollar will provide additional support. Inflows from hedge funds will give the oil price the additional upside momentum it needs to keep its rising trend intact in the intermediate term. In view of these factors, participants are justified in maintaining an intermediate-term bullish posture on the crude oil market.

On a strategic note, I’m currently long the Invesco DB Commodity Index Tracking ETF (DBC). After confirming a technical breakout signal in early October, DBC remains above its rising 15-day moving average as of January 7. I’m using the $15.70 level as an intraday stop-loss on this trading position.

Disclosure: I am/we are long DBC. I wrote this article myself, and it expresses my own opinions. I am not receiving compensation for it (other than from Seeking Alpha). I have no business relationship with any company whose stock is mentioned in this article.