A review of the corporate buyback tool.

How does this practice return capital to shareholders.

Why you should pay attention to buyback programs.

There is a lot of controversy around buybacks. Whether stock buybacks are good or bad depends on a lot of factors. A ban on share buybacks is almost certainly a bad idea. I keep a close eye on buyback activity because it can be an important tool to create value for management and aggregate levels of buybacks are a signal about expected future returns. First I'll dive into what buybacks are and then move on to discuss this tool to return capital to shareholders.

Why would a company buy back its own shares?

The effect of buying back your own shares (and canceling them) is that effectively the remaining shares outstanding increase in value. I’ve created the chart below to illustrate this. This hypothetical company buys back 50% of its shares from 2020 to 2021. Meanwhile, its free cash flow remains stable. Effectively the FCF per share doubles. With earnings, you would see a similar effect. Debt is unaffected. While metrics like EBITDA/debt would remain unchanged, the equity to debt ratio deteriorates. In that way, it does affect the company’s ability to withstand future adversity. 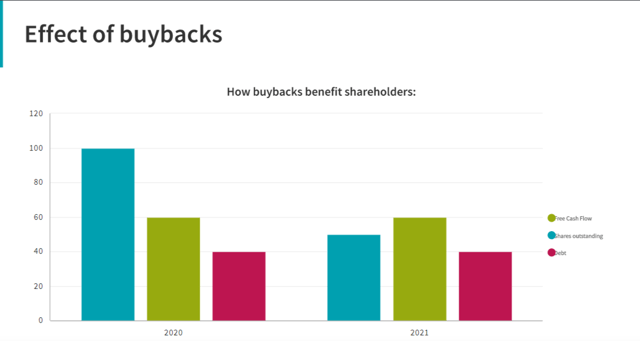 Basically, capital is usually returned to shareholders through buybacks and/or dividends. Which tool will best serve the purpose depends on a lot of circumstances like the price of shares vs. the intrinsic value of the shares, dividend tax and the value of a consistent capital return policy. It is not an accident you see a lot of firms utilizing both channels.

Why is it often argued buybacks are bad?

You hear a lot of arguments against buybacks. Boards and executives have a large say in how capital generated by the business is allocated. Doing it well is an important part of generating strong sustainable returns for all stakeholders. 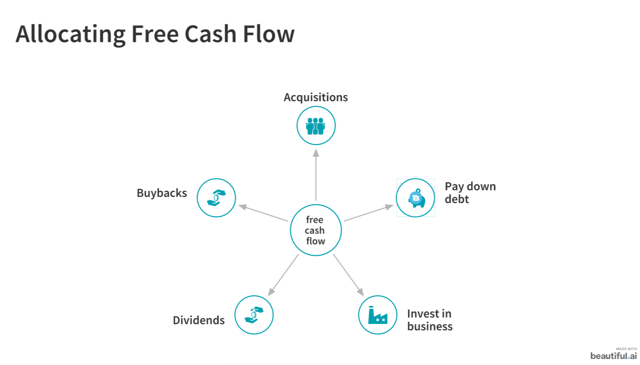 Most stakeholders in a company have strong protections and contracts in place that ensure they get their cut. Shareholders do not. One of the jobs of the board and management is to consider what is in the best interest of these stakeholders. This is a subjective consideration. It is not necessarily the case that buybacks or dividends are always the capital allocation decision that best maximizes shareholder value.

Sometimes it is made to sound as if society would benefit more if corporations would, instead of returning capital to shareholders directly, invest in R&D, their people or make capital investments. However, it’s not that simple.

Why buybacks are not bad

Sometimes the expected return of investments in people, capital investments or R&D within a certain corporation is very low. This is often the case with more mature companies. They’ve made a lot of investments like the aforementioned in past decades and are serving much of their addressable market. For example, there is often debate about whether Alphabet (GOOG) (GOOGL), a company with strong free cash flow, is wisely allocating capital. It is bravely, and against the trend, directing billions to seemingly esoteric ventures with a faraway uncertain payoff.

The reason I think we should never push corporations towards making suboptimal investment decisions by forcing their hand or strongly incentivizing one over the other (many are already by nature overoptimistic) is that returning capital to shareholders does not mean the capital ultimately doesn’t get directed towards a productive use in society. For example, Alphabet could repurchase its own shares or choose to issue more equity to employees and in both instances, its resources would be allocated somewhere.

Subsequently, the shareholders or employees who now have more money could use it to angel-invest or put it in whatever they believe is an equity with great potential on the stock market. Indirectly, capital still gets allocated towards R&D and capital goods. Without forcing anyone’s hand.

The right thing to do is to invest the excess capital at its highest and best use. You are right, that’s a totally subjective thing but that’s a topic for another day. The key to this issue is that buybacks are most definitely not categorically right or wrong. Instead, it depends. I like the fact that this tool is around as an alternative to dividends. It gives great executives another tool to set themselves apart from the crowd. The best of the best CEOs do large buybacks irregularly.

Why pay attention to stock buybacks

At the Special Situations report, we pay quite a bit of attention to share buybacks. Research shows that companies just announced a buyback program show very good relative returns subsequently. Uekoetter and Evgeniou confirmed this as recently as 2015:

We examine the behavior of stock returns after share buyback announcements. In line with the existing literature, we find evidence of abnormal returns after buyback announcements. A market neutral portfolio that is long equally weighted (with daily rebalancing) all companies that announced within the most recent month and short the IWM ETF/market using a rolling β estimated from the recent 250 days has average annual "abnormal" returns of 11.6% with a Sharpe ratio of 1.3 over the period from 2000-01-20 to 2014-12-31. Moreover, small value-stocks that under performed pre buyback announcement date outperform large growth-stocks that over performed pre buyback announcement date. A portfolio of the first type of companies, in which we hold stocks for one month after buyback announcement, shows annual "abnormal" returns relative to the IWM market index of 16.3% with a Sharpe ratio of 0.8 over the same period. A portfolio of the second type of companies has returns and a Sharpe ratio of 7.6% and 0.4, respectively, over the same period. Finally, we provide evidence that buybacks could potentially provide a signal for timing/predicting the overall market.

Buybacks are another tool in the corporate shed. It is not an evil or bad practice. Neither is it the be-all and end-all for value creation. It is a tool that gives great executives another way to express their skills. It is a tool that can help to lower the overall tax burden on some investors. Buyback programs can be an interesting signal that shares are about to appreciate. In the aggregate, weak insider buying signals low future returns. Coincidentally, share buybacks are currently at a low level.

Check out the Special Situation Investing report if you are interested in uncorrelated returns. We look at special situations like spin-offs, share repurchases, rights offerings and M&A. Ideas like this are especially interesting in the current late stages of the economic cycle.

Follow Bram de Haas and get email alerts
+
Add a comment
Disagree with this article? Submit your own.
To report a factual error in this article, click here.
Your feedback matters to us!