The Credit Suisse Crude Oil Shares Covered Call ETN (NASDAQ:USOI) is currently a dividend investor’s friend, with the yield clocking in at around 16% on an annualized basis. While I think this dividend rate is likely to continue at comparable levels going forward, I believe that in the coming months USOI will complement its hefty dividend with share price appreciation and will be a valuable asset for some investors.

In this article, I plan on spending most of the space writing about what exactly USOI is and why it is likely to shine going forward. However, prior to jumping into an analysis of the finer points of the ETN, let’s talk about oil markets to get a strategic view of the general direction of where crude prices are likely headed.

The fundamental story for crude oil can really be distilled to a few key elements. First off, crude inventories have been shrinking on a year-over-year basis for quite some time. 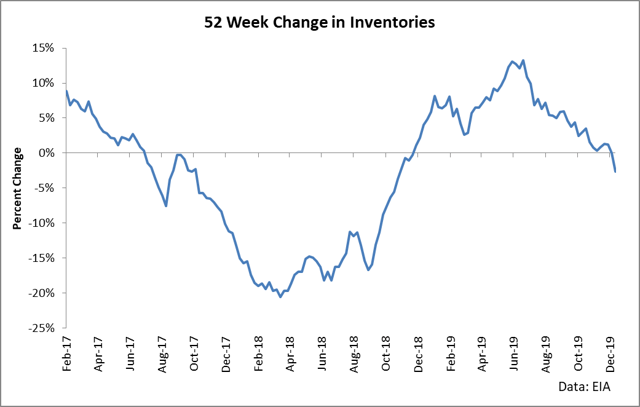 In the following few paragraphs, we’ll talk about exactly why this is happening, but at a high-level view, it’s important to track this benchmark because price changes in crude oil are directly correlated with movements in inventories. 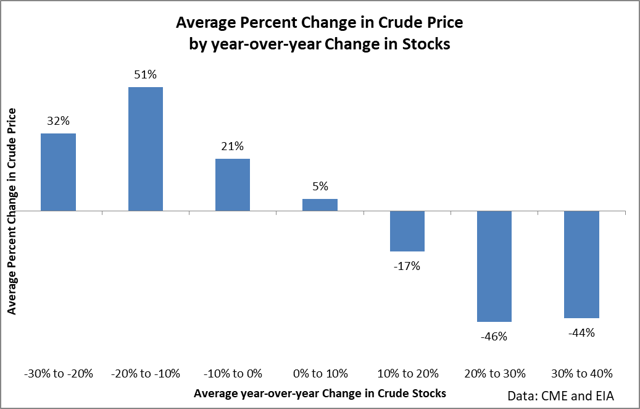 Since USOI is an instrument which is directly exposed to price movements of WTI futures, if the trend in place continues, we are going to see the price of USOI likely increase.

There are a few key reasons why crude inventories have started to fall. First off, crude production growth is slowing. 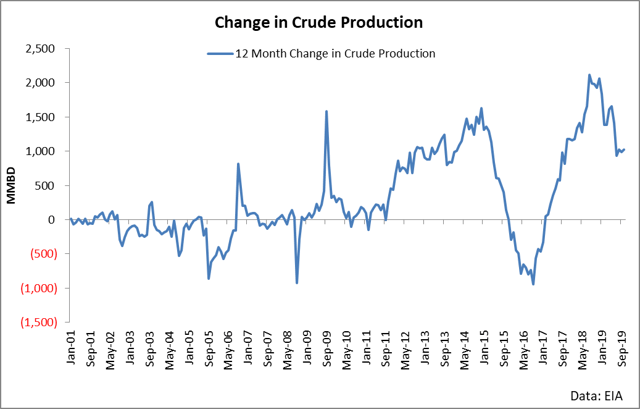 The inventory balance represents the sum total of all supply and demand factors, and in general, total demand grows in a typical year, which means that supply must grow as well to keep the market balanced. Production is the first factor of supply, and the reason it is declining largely has to do with drilling economics. You can examine this in a million different ways, but the bottom line story is that production growth is slowing across basically every shale region. 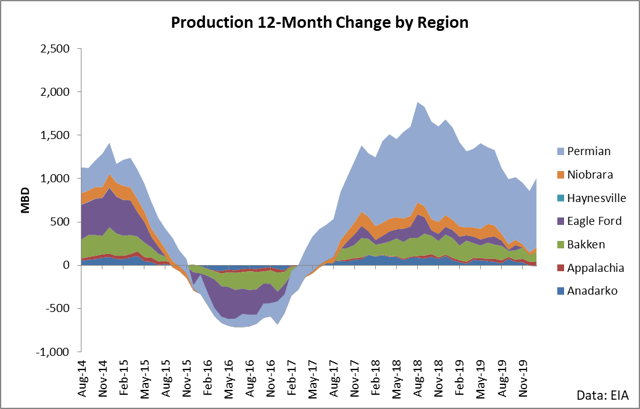 The reason why this is happening is that capital constraints from financers have resulted in companies slowing activities and attempting to have more balanced budgets. This has resulted in a wave of bankruptcies, and this trend will only reverse when crude prices go higher. In other words, as long as this trend remains in motion (and it’s been in motion for over a year), we are likely going to see prices trending higher.

The second factor of supply is imports, and OPEC cuts have resulted in the level of imports in 2019 being the lowest total barrels shipped into the United States in decades. 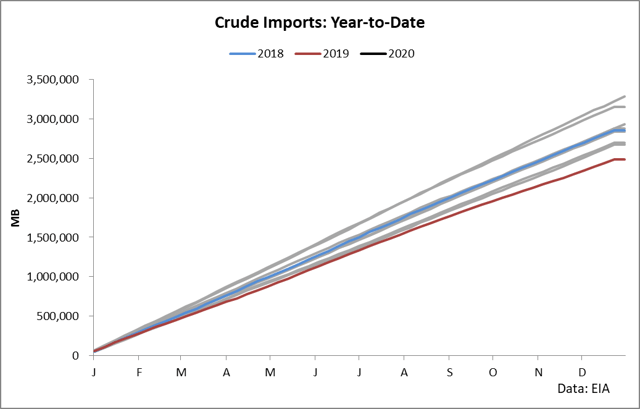 Going forward, these cuts are slated to continue through March 2020, and OPEC is currently showing higher compliance, which furthers the case.

As long as OPEC cuts remain on the table, crude supplies are going to remain tight. And as long as crude supplies remain tight, the price of oil is generally going to increase. This, coupled with a slowdown in production is indicative that prices are likely going to be headed higher for some months. In and of itself, this could be a strong reason to consider buying USOI. However, I believe instrument specific factors indicate that shares are going to reward holders through 2020.

Let’s face it: USOI is a pretty complicated instrument. It is an ETN which is based off of a covered call strategy on an ETF. USOI gives the return as though you were holding the USO ETF and selling a covered call on your position at 6% out of the money. The premium you would receive from selling the option against your USO position is paid out to shareholders in the form of a dividend (which at present rates is around 16%).

Right off the bat, we can say a few things about the instrument. First off, it is a strategy which sells off the upside. So, if your objective is to capture an uptrend in crude oil, this is definitely not the investment for you. For example, if USO increases by 10% in a given month, you’ll see 6% price appreciation plus the dividend from selling the option.

And second, with this strategy, we need to be aware that the factors which impact USO are going to impact USOI.

If you don’t understand USO, then I’d encourage you to read its fairly straightforward methodology. Put simply, USO holds exposure in the front-month WTI futures contract, and then, about 2 weeks before expiry, it rolls exposure into the second-month contract. It then maintains this exposure through expiry of the front and starts the process over again.

This process is simple and straightforward, but beneath the surface, there are a few issues. The primary issue to keep an eye on is roll yield. Roll yield is what you get when you hold exposure in that second-month futures contract. It arises from the fact that prices in the back of the curve tend to move towards the front of the curve. In other words, the relationship between the prices between futures contracts will have material impacts on your holdings in USO (and, of course, USOI).

So, here’s the good news. WTI is in backwardation. At present, the market is pricing in an annualized rate of about 5% or so of backwardation in the front of the curve. This means that if absolutely nothing changes and prices remained static through 2020, we’d probably see USO increase in value by some value less than 5% simply because its exposure in the second month rolls up towards the front.

And here’s the bad news. WTI is almost always in contango in these two contracts. 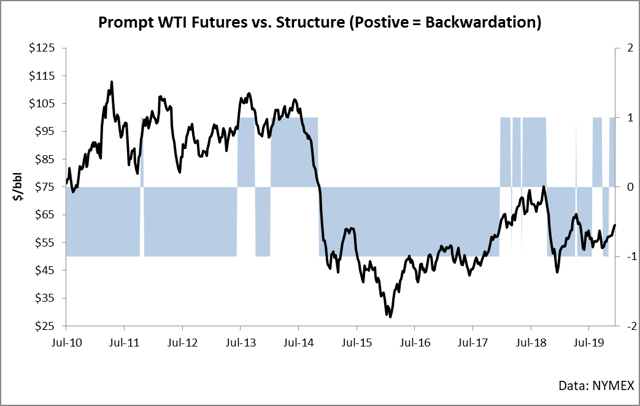 Over the last 10 years, the normal state of the market has almost always been contango in WTI futures for the front two contracts (even when there was backwardation present later in the curve). What this practically means is that in general, USO (and USOI) is gradually losing value from roll yield and that the current market conditions are shining for these instruments.

So, to wrap this up with a recommendation, I believe that USOI makes for a solid investment at this time. You are probably going to see the price of USO and USOI increase due to WTI futures rising in value as crude inventories fall. And you’re probably going to see USOI rise due to the positive roll in the futures curve. But if you’re going to hold USOI, I would encourage you to actively monitor the shape of the futures curve to ensure that you’re trading with positive roll.

USOI is currently delivering a very strong dividend yield, which is the main appeal of the instrument. Crude fundamentals are tightening as supply continues to reduce into North America, which will likely push the price of crude higher. USOI is currently benefiting from positive roll yield, and this is a strong reason to hold the note.