In the past cycle, many practitioners have questioned the ability of ECB to raise inflation.

Draghi urged governments to start easing their fiscal policies in the coming years in order to improve the effectiveness of monetary policy.

However, a recent study from the European Policy Studies finds that a fiscal expansion would be ineffective in raising inflation or interest rates.

Euro area policymakers will have to accept the low rate of inflation for the time being.

In the past cycle, many practitioners have questioned the ability of the ECB to raise inflation. Figure 1 (left frame) shows that the market-implied measure of inflation expectations, the 5Y5Y inflation swap, has constantly been declining in the past cycle and is currently sitting at 1.3%, far below the central bank’s 2 percent target. We notice a remarkable drop in the year following the euro area sovereign debt crisis; inflation expectations dropped from an average of 2.4% between 2004 and 2012 to 1.4% in the past 5 years. Previous studies have attributed the fall in inflation in the euro area to the lack of aggregate demand and increasing unemployment, especially in the peripheral economies, combined with a slight "recovery" of the euro between July 2012 and May 2014 (from 1.20 to 1.40). It is interesting to notice that the 1 percent decrease in inflation expectations was also marked by the significant drop in core government bond yields. After co-moving strongly with the US 10Y yield for more than 20 years (Figure 1, right frame), the German 10Y bond yield diverged from it in 2013 and started to co-move with the Japanese 10Y bond yield in 2015, which had been flirting with the 0 percent support. Economists have found that the euro area faces strong similarities with Japan, and that the ECB may be forced to follow the BoJ's path if officials want to offset the disinflationary forces. Will the ECB have to eventually accept low inflation?

Even though the unemployment rate dropped from 12% in 2014 to 7.5% today and EURUSD declined from a high of 1.40 in May 2014 to 1.1150, inflation has remained flat and both key measures (headline and core CPI) have been oscillating around 1% (Figure 2, left frame). In his last few meetings, former ECB Governor Mario Draghi made it clear that EZ policymakers are not keen on letting inflation anchor around 1 percent and that the central bank will do "whatever it can" to lift inflation expectations back to 2 percent. As a result, the ECB cut its deposit rate by 10bps to -0.5% in September 2019 and relaunched QE, which entailed 20 billion euros per month of asset purchases for "as long as needed".

We saw previously that the rise in global liquidity was one of the major drivers of equities in 2019. Figure 2 (right frame) shows that European equities tend to perform poorly when the ECB tapers; the annual change in the ECB balance sheet total assets has had a major influence on equities since the financial crisis.

Hence, in order to achieve a 2 percent inflation faster than the macro models are currently projecting, Draghi urged governments to start easing their fiscal policies in the coming years. To the exception of France, all the other countries of the euro area are expected to run a budget deficit below 3 percent in 2019, with Germany and Netherlands running a 1.1% and 1% surplus, respectively (Figure 3). 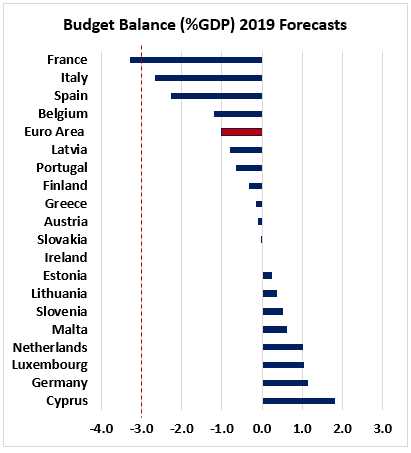 In a recent study from the European Policy Studies, Gros and Capolongo (2019) argued that a fiscal expansion would be ineffective in raising inflation or interest rates. The authors use a variety of 10 different models from the Macro Model Database (MMD), which allows them to study the impact of a fiscal policy shock on macro variables such as inflation. As the average budget balance in the euro area is already at -1%, the MMD models find that a "reasonable" 1% increase in government expenditures (as a percentage of GDP) would merely increase inflation by 4bps in the 4 quarters following the fiscal shock (Figure 4, left frame). The most optimistic model predicts that the average peak impact on inflation would be 25bps within the year following the shock, which would still not be enough to bring inflation back towards 2 percent. For the interest rate, the average impact would be 14bps in the quarter following the fiscal shock.

According to that study, the ECB would need to rely on a much bigger fiscal program in the euro area in order to see inflation starting to rise. Otherwise, a "little" 1-percent fiscal expansion would essentially have no impact on inflation and rates in the medium term.

Unit labour costs, which is a popular leading indicator for core inflation, has been the only one pricing a slight pick-up in core prices in the next few quarters (Figure 5, right frame). Otherwise, most indicators are not pricing in any sign of increase in inflation for the coming year. For instance, our core inflation model is currently expecting core inflation to remain steady at around 1 percent (Figure 6, left frame).

We think that there is nothing that the ECB can do to levitate prices in the short/medium term, and therefore, policymakers will have to accept the low rate of inflation for the time being. The rise in the euro we expect for this year will certainly not help to raise inflation expectations, but will not be significant enough to send inflation to even lower levels. We think that 1.20 remains the threshold for EURUSD; a higher exchange rate would then have a negative impact on the economy.

Disclosure: I am/we are long EURUSD. I wrote this article myself, and it expresses my own opinions. I am not receiving compensation for it (other than from Seeking Alpha). I have no business relationship with any company whose stock is mentioned in this article.

Follow Rothko Research and get email alerts
+
Add a comment
Disagree with this article? Submit your own.
To report a factual error in this article, click here.
Your feedback matters to us!