U.S. Soft Red Winter wheat (SRW) production hit near-record lows in 2019 after experiencing year-over-year declines in planted and harvested acreage since the 2013/14 marketing year. Continued and sustained poor weather conditions in SRW's predominant growing region of Illinois, Indiana, Ohio, and Michigan have contributed to significant supply side concerns for the crop. In contrast, the production of U.S. Hard Red Winter wheat (HRW) has remained relatively steady even with decreasing acreage.

Representing the third largest wheat variety in the United States, SRW wheat is mainly grown in 25 states east of the Mississippi River and is commonly used for producing flat breads, cakes, cookies, snack foods and pastries. SRW's domestic use/consumption has accounted for an average of 48% of total SRW supply since 1985, showing strong domestic demand for the grain. Comparatively, HRW's domestic use/consumption represents on average only 40% of total HRW supply over the same duration.

Optimism surrounding a U.S. - China trade deal could be partially responsible for the rally. Insights via @CMEGroup pic.twitter.com/1kS9hgRlJp

In the past two decades, major global commodity export markets and production have undergone a shift towards regionalization as new centers of production emerge. The wheat export market is no exception. According to the USDA, today's world wheat markets are flush with record-ending stocks, driven by a massive growth in production and exports from the Black Sea Region (BSR). Once the dominating presence, the U.S. wheat export market share has decreased significantly from 29% to 15% since 2000.

With HRW's high dependency on export marketing channels, the shift in global wheat export markets away from the United States and towards Europe and the BSR has had a marked impact on global demand for the U.S. HRW crop and the price at which it can be exported.

BSR wheat typically trades at a discount to HRW, as can be seen in the respective futures price of each market below. This, combined with the BSR's favorable geographic proximity to the major wheat import markets of North Africa, the Middle East and Asia, has greatly limited the competitiveness of U.S. HRW exports in recent years, leading to a build-up in supply and stocks. 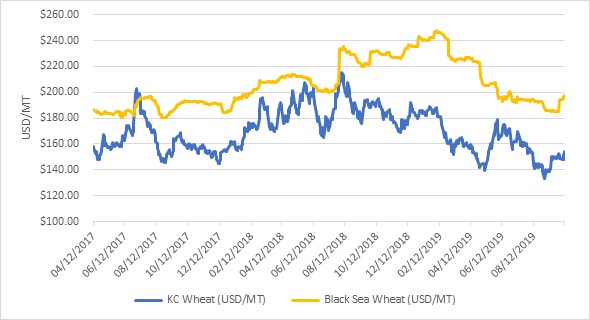 With all of these factors in play, the Kansas City Wheat futures (KE) contract, based on HRW wheat, has been trading at an unprecedented discount relative to Chicago Wheat futures (ZW), based on SRW, in 2019. As described above, the historically small SRW production relative to HRW production has resulted in tight SRW availability and stocks and record SRW cash premiums versus HRW.

Abundant world wheat supplies and competition from the Black Sea, combined with the domestic supply-side concerns of SRW wheat relative to demand, could carry the Kansas City-Chicago wheat spread well into the 2020 marketing year.

With the macroeconomic trends driving these two markets continually in flux, the activity in this spread will have widespread implications for domestic and global wheat markets for the foreseeable future.